“Will you come over and ride our horse?” she asked. “We know he’s a dressage horse, we just don’t know how to cue him, but if you rode him…  He does that trot in one place thing.”

(I already knew they bought this elderly horse from their ‘trainer’, who tranquilized him for them to try out. That was when I asked them to refer to their ‘trainer’ by some other name.)

“Yes, he does it a lot,” she says enthusiastically!

“Does he do it going towards the barn?” says me, not so enthused.

My inner dressage queen is pretty sure it doesn’t count if you don’t cue it. Besides, getting happy feet towards the barn doesn’t mean he’s a dressage horse, or does it? Maybe one rider’s barn sour is another rider’s piaffe.

Back in history, when horses domesticated man (read about it here), we looked at the skills horses had and tried to partner with them. They were agile and fast and strong. It seems obvious that hunting would be more successful with a horse. I think sometime around then, a horse did something like a piaffe and got rewarded for it.

When men hunted men, warhorses were trained to piaffe in battle- to keep a horse warm and moving. Not to mention the intimidation factor for enemy foot soldiers.

Centuries have passed, but piaffe has stayed. I think a few calf roping horses do a kind of western piaffe in the box, waiting to chase. Lots of horses on the race track have a prancing step to the gate. Eventers can get happy feet anticipating the launch from the start box. And even trail horses who turn toward home are known to dance that happy jig.

Some people think Dressage is unnatural work for a horse, maybe it’s the weird outfits we wear. Lateral movements, flying (tempi) changes, asking for quick response: all are as natural for a horse as a piaffe- as natural as building energy and releasing it.

In Dressage, we ask for piaffe with the stipulation that the horse be relaxed and rhythmic, in a strong and collected frame. And that other little thing: We cue it. 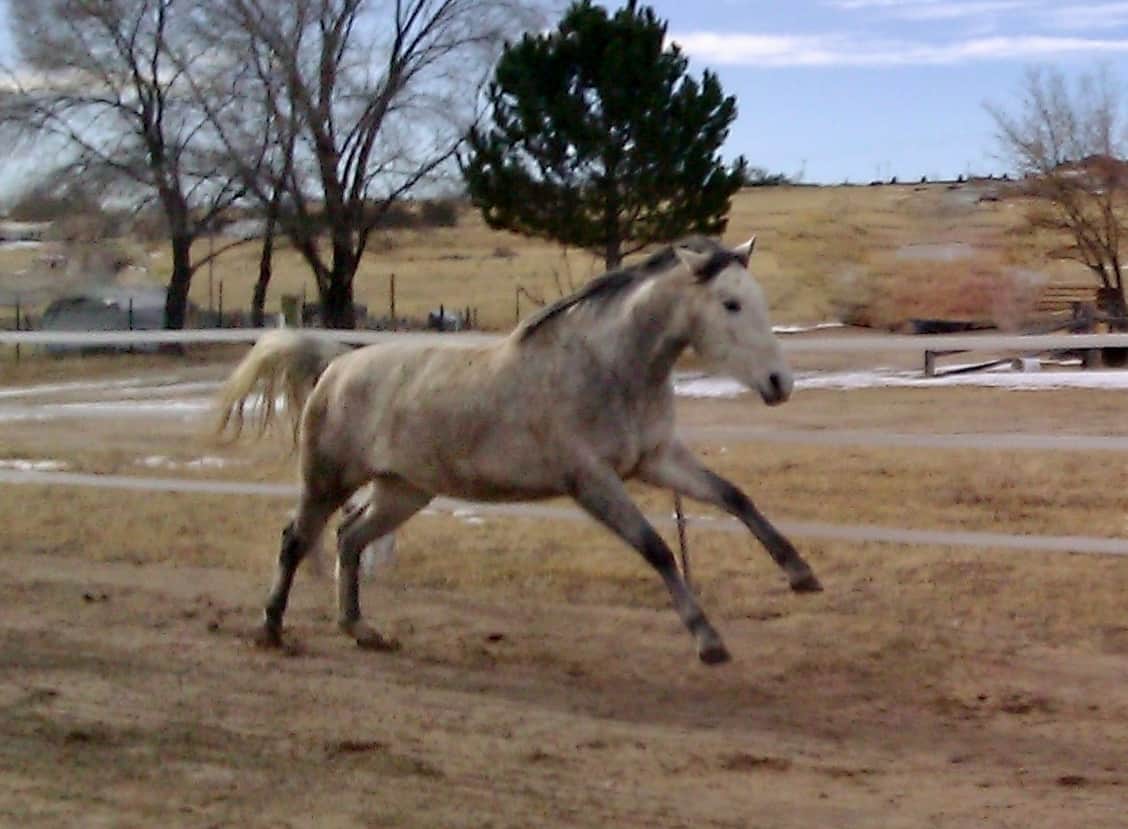 On a related note: My young mare is on the mend from an injury and I have bringing her back slowly, with a bit of lunging.

Clara is home bred, not the most elite mare. She’s sweetly conservative, not overtly flamboyant. And she has a confidence that doesn’t give much away. But there’s something simmering in her, just under the surface.

We went into the pasture to lunge one day this week, for the fun of it, and Boy Howdy, was it fun! She leaped and bucked and her hooves could barely reach the ground. She arched her neck and threw her tail up over her back. Her trot had exaggerated hang time.

I watched in awe, for a moment she wasn’t my mud-rolling filly. Instead, she moved with the timeless grace and strength of a warhorse, as natural as the sun and mystically ethereal as a ghost.

Then it happened: Clara’s exuberant trot, high and rhythmic, just stopped covering ground. Five or six more strides bounced effortlessly on the spot, then stillness. She looked me in the eyeball- proud of sharing her secret.

It was her piaffe- elegant and un-cued. For now.

P.S. I don’t have a photo of Clara’s piaffe. This is her muddy broad jump. It isn’t the same thing at all.