New Year's Day, minus the Happy. 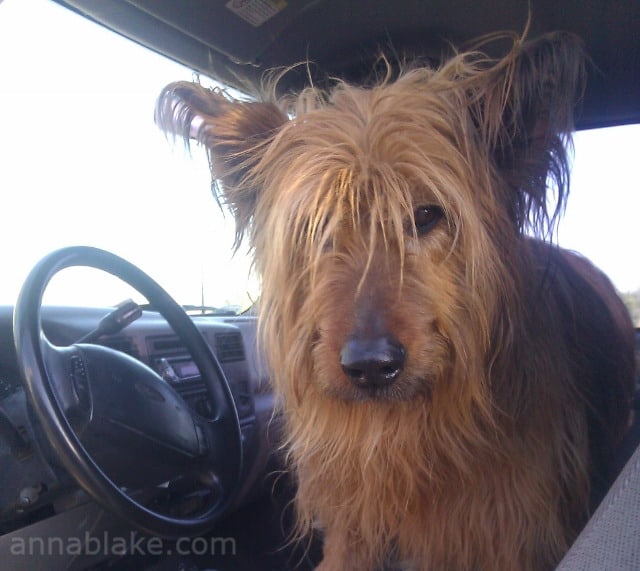 It was New Year’s Eve, and I was listening to a sad radio memorial about the musicians who passed this year. I do the same thing on my farm at year-end; I take a census and count my losses.

We lost a wonderful goat this year. Elvis loved flirting with women, sleeping with his twin, Sumo, and masterminding escapes. Sumo still mourns.  And some loud, sarcastic quacking reminds me we’re up a dozen ducks.

It could have been so much worse; we have an aging population here at Infinity Farm. Both of my elderly horses are frail. On cold days, the Grandfather horse doesn’t want to walk even a few steps. The old mare has coliced twice so far this fall. One of the llamas is 18 now, I watch her closely as well.

And then there’s my cattle dog, Hero, in end stage heart failure for the last two years. Sometimes he seems too tough to die, but it’s been a hard couple of weeks with him having more ‘fainting’ spells. I value each moment with this stinky old dog.

Hero was sleeping under my desk New Year’s Eve, as I was listening to the musician’s memorial and writing in my studio.

A few minutes later, I was speeding to the all-night emergency vet clinic with Howdy. Some of you knew him, Howdy usually rode shotgun in my truck. I could tell it was bloat, the canine equivalent of colic. Is there anything worse?

A few minutes after arriving at the ER,  I was holding him and signing papers. I think the best part of him was gone already. I told Howdy what a good boy he was, breathing with him as the vet administered the drugs to release him from our life.

It was like a sonic boom. Such a heart! Gone in a moment. I felt so disoriented that I called our best friend to talk me home, but I got lost anyway.

Have you ever had a dog who was so perfect and true that it seemed any words you could use about him would only diminish who he was?

Oh, hell, of course you have. All of our dogs are that way. Howdy and I didn’t share some unique, sacred trust. What we shared was just normal. And he’d hate me to tell maudlin stories about him. 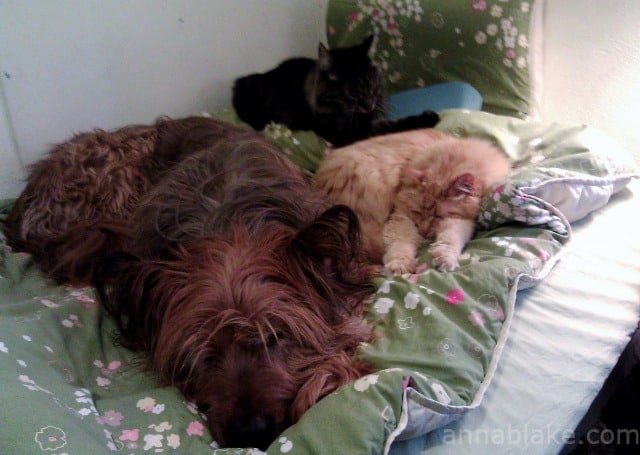 Howdy was just a dog.

Like a horse is just a horse. Meaning he was a fully dimensional sentient being, with emotions and intellect and the ability to commit his whole being, in ways a mere human would struggle to do.

Howdy was just my dog.

“He will be yours…to the last beat of his heart. You owe it to him to be worthy of such devotion.” -Unknown.

Howdy’s love was ferocious; it could make you feel pretty special. I’ll pay that forward to the next dog.  Yes, I’ll get another dog soon; it is the best way to honor him.  Howdy’s irreplaceable, but the mentoring job that he took up from the long line of dogs that came before him will continue. I’ll always need the help of a few dogs to improve my nature.

What I notice is that no matter how much I offer to animals, I always get more back.  I always wind up ahead of where I started, once I can breathe again, once the first pain of loss begins to heal. It’s a blessing being owned by a dog, I’m the lucky one.

For now, I’m haunted. I see Howdy in passing shadows and feel his big head in the center of my back, pushing me out of the truck. I want to save his nose prints on the front window.

Maybe you are missing a dog who made you feel special, too.

“Grief is like the ocean; it comes on waves ebbing and flowing. Sometimes the water is calm, and sometimes it is overwhelming. All we can do is learn to swim.” -Vicki Harrison.

But then the sun came up and it’s New Year’s Day.  I keep a special eye on my collapsing old cattle dog. And I take care to give the elder horses an extra bedtime snack during this frozen, dark season.