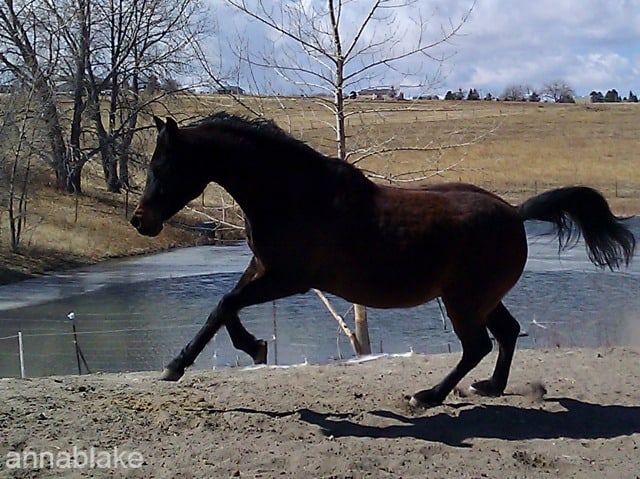 “That horse has been beat!” is her opinion. Sometimes you can look at a horse and just tell. He’s showing every sign, and he has been passed from owner to owner. Abuse is always possible, but working with him, I don’t think he’s literally been beaten. Who’s right?

The horse is. It’s my As-If Rule.  His history doesn’t matter that much. If he acts as-if he has been beaten, I believe him. It would be silly to fight with him about it. To build trust someone has to offer it first, so I’ll take him at his word and begin a safe, slow training approach, and continue listening.

Sometimes a horse and rider have a misunderstanding. Maybe the rider thinks that the horse knows what she’s asking him and he’s refusing for no good reason! And maybe that horse is all resistance: upside down, tense, and saying in every non-verbal way that he can, “Are you nuts?!” Just stop. Continuing the same discourse (the same cue) louder and louder doesn’t make it any clearer.

If you feel like the bickerfest is degenerating to a brawl, I have the answer. You may not like it: Your horse is right. Listen to him.

First, if you’re fighting, you’ve lost already.  Second, there’s no negotiating power in being right if it makes your horse wrong. Dominance is a poor excuse for positive leadership. But if you can find common ground, like accepting where things are, you can start from a non-adversarial place and then negotiate the direction you want it to go.

Does your horse have an issue with a thing, like trailering, or the mounting block, or the canter depart? Horses are almost never actually afraid of the thing. They just know that the thing is the location where fight starts. They hate fighting so they resist the thing, then we resist, and it escalates until everyone is frustrated or mad.

The biggest part of fighting with a horse isn’t even physical. Most fights are passive-aggressive mental resistance: a rider’s willful temper or an obstinate grudge or even being consistently disappointed makes your horse feel as-if it’s a death march and war is hell.

Just stop fighting. Flash him a peace sign and smile. “Nothing will end war unless the people themselves refuse to go to war.” Albert Einstein, (not quoted enough in horse blogs.)

Instead of resisting, listen to your horse. Try a release; take a breath, and ask smaller, so that he can release easier. Cue more simply if he acts as-if  he’s confused. When he gives you a tiny bit of what you were asking, praise him generously, so the reward is bigger than the correction. Celebrate peace!

Staying positive is more than a mood. It’s the start of a tendency that the As-If Rule amplifies, creating a happy, responsive horse. When you feel a need to discipline something, your mood is a good place to start.