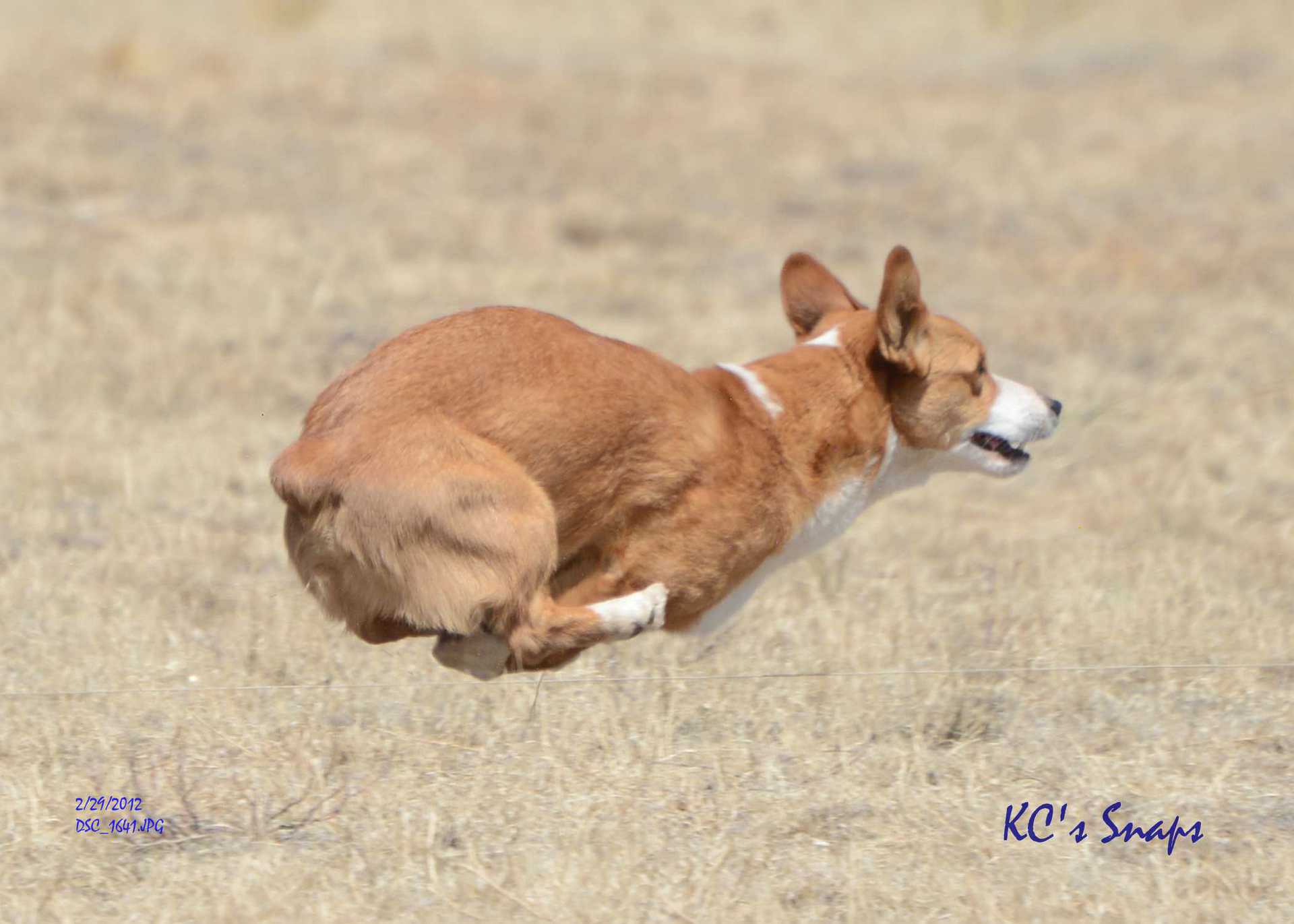 It’s been three months since Walter came here from Wyoming Dachshund and Corgi Rescue to save us from a quiet and peaceful life. (read here) We wanted to celebrate in a special way. I suggested a Man from Snowy River film festival, but Walter wanted more.

We settled on Lure Coursing. It was an obvious choice for a corgi athlete like Walter. Lure Coursing is a relative of greyhound racing, but the course has corners and runs across the yucca-adorned prairie. White plastic bags hopefully take the place of a live rabbit. Runs are punctuated by tumbleweed twisters.

First, we registered with AKC. Now we can compete in all sorts of performance events like rally, agility and herding. They asked me to pick his registered name and being a rescue dog, we weren’t burdened with elite kennel names or fancy parent names. I picked a name all about him: Walter, Walter, Walter.

We arrived early and watched a run, the plastic bags whizzed by with a quick dog in hot pursuit, and Walter nearly collapsed my lung, trying to launch out of my arms and join the hunt. When I got my breath back, I decided we should return to base camp and save ourselves for the real thing. I didn’t know how much spectating my body could take.

It was the perfect day, Walter ran with the wind, leaving surprised onlookers cheering. Then he had second breakfast; hard-boiled duck eggs and roast chicken. Athletes like a high protein snack. He didn’t want a nap, but he was willing to meditate. Then finally the second run, even faster than the first.

And just when it could not get one tiny bit better, we came back on Sunday and did it all again.

Have I mentioned how nice all the people were? And the dogs were having such a great time. This is an event where the dogs run with glee and abandon and there is very little human intervention, unless you count the cheers and congratulations for all the dogs.

Walter earned his Coursing Ability title Sunday morning, now he has letters at the end of his name. What does a title mean to us? It’s a stamp on our passport and I expect others. It means that even if we met under bittersweet conditions, we plan to travel side by side from here on out.

On Walter’s last run of the weekend, he started strong and pulled like a locomotive. It was a much hotter day and the finish line was up a long hill. His time just as quick: 300 yards in just a bit over 30 seconds. Do the math, Bunnies.

We came home and went back to our weekday lives. Just when I had convinced Walter that he could nap through my trips to the bathroom, he’s fallen in love all over again and can’t let me out of his sight. Guess I’m still his favorite lure.

Yesterday, I was digging in my tote bag and a plastic bag with some fasteners from the hardware store fell out. Walter grabbed bag and ran to the far end of the house. He would have run another 300 yards if the front door had been open. I think there is some other title for that. 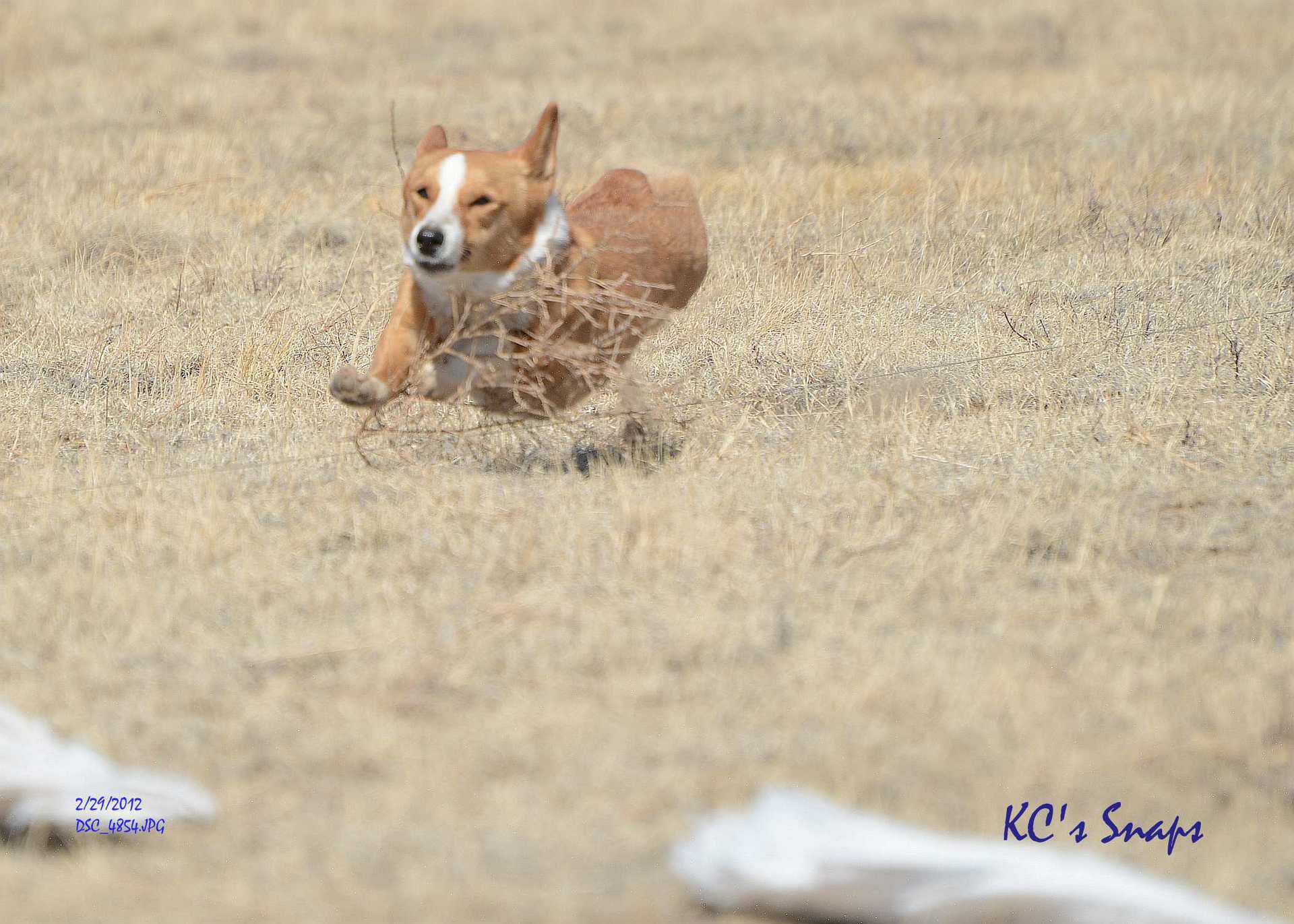 Here’s Walter, obliterating a tumbleweed twice his size, on the way to the kill!

Please remember to sign up for HORSEPLAY ALLOWED, our Ruby Ranch Horse Rescue Benefit coming up on June 8th. And more information is on my events page.