The Battle Cry of An Old Gray Mare. 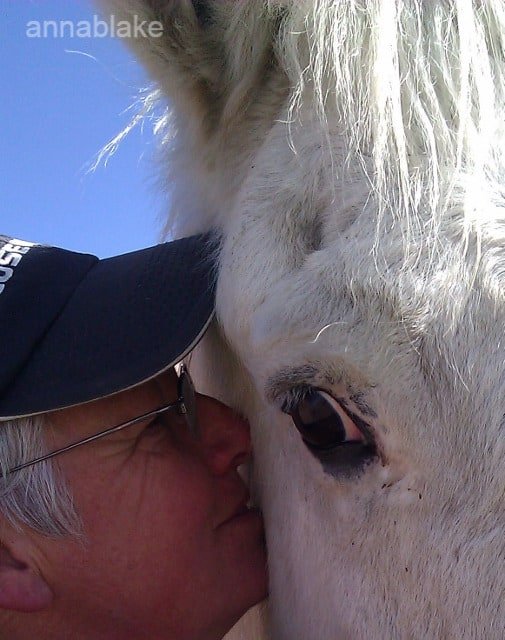 “Do You Work Out?” I find this question difficult to answer. I’m never sure what they are asking but it was even worse when I was single. Then I thought it was a code phrase for another question.

Are you asking do I go to a mirrored room and lift weights, not because they need to be somewhere else, but just to put them back in the same spot? Do I run laps of something, even if no one is chasing me? Do I dancercise to music that makes my head want to explode? No.

The Dude Rancher and I do practice Yin Yoga. That’s where you tie up yourself in a knot and breathe for a while. I don’t think that qualifies as working out really, but we always smile at each other on the way home.

I don’t work out, I train horses and riders. It’s outdoor work, I have an unwanted tan in the middle of winter. Sunscreen doesn’t work as much as I do. I wear out boots regularly and I think they should last longer. Recently I got a new smartphone that has a footstep counting app. It seems I am in the extremely active footstep category. I notice knowing how many steps I take makes my feet a little more consciously sore, and maybe those boots actually were well made. For someone with a desk job.

I don’t work out, I do chores. Infinity Farm is a small place, and I am that odd sort who loves mucking. Each week I haul off around a ton of manure. Literally. I muck it into tubs, lift the tubs into the trailer, and then off-load the trailer at the recycler. I save enough money each month to feed one of my retired horses, and I think it strengthens my ‘retirement’ plan as well. Two tons of lifting a week is a lot, it would be gratuitous to add in the hay and feed I carry. But no, I don’t lift weights.

A while back, my monthly load of hay was delivered by a couple of new guys. They were 20-ish and had spent a little too much time cowboy dressing, if you know what I mean. They were bragging about riding bulls. (Just for the record, I’m not a fan of bull riding. I think it’s just silly.) They were clearly trying to show off and it baffled me. It seemed almost flirtatious the way they carried on, it made my head tilt like a corgi.  Let’s be clear, I’m too old to be their mother. Or maybe they were flirting with each other? I don’t understand men.

As they stacked the hay in my barn, I off-loaded 30 bales to the back of my truck to take to another spot. When I got back from stacking my load, they were still chipping away at their 60 bales, doing more talking than tossing hay.

I was thinking of telling them that they throw (hay) like a girl, but they aren’t that good, and I know how fragile baby bull riders can be.

It’s an old insult, to tell a man that he throws like a girl, but the insult never made any sense to me. I had a high school P.E. teacher who retired from fast pitch softball and I caught a few of her pitches. I mean, Serena Williams plays tennis like a girl, doesn’t she? I think the original meaning is lost and now might be the time to really take some pride in it. Are you that strong?

No bragging, I know I’m not out of the ordinary for my lifestyle. I have a lot of women friends who throw even more like a girl than me.  But I am doubly dangerous, I am no longer a demographic. I turned 59 this week. They can’t sell me cosmetics, or kitchen doodads, or a vacation home in Arizona. Advertisers think I no longer exist, as does a good segment of the population. It’s kind of liberating.

Beware the old gray mare: I’m not dead yet, and I throw like a girl.

Posted in Farm Life, Horses/Equestrian, Opinion From the Mounting Block...

32 thoughts on “The Battle Cry of An Old Gray Mare.”