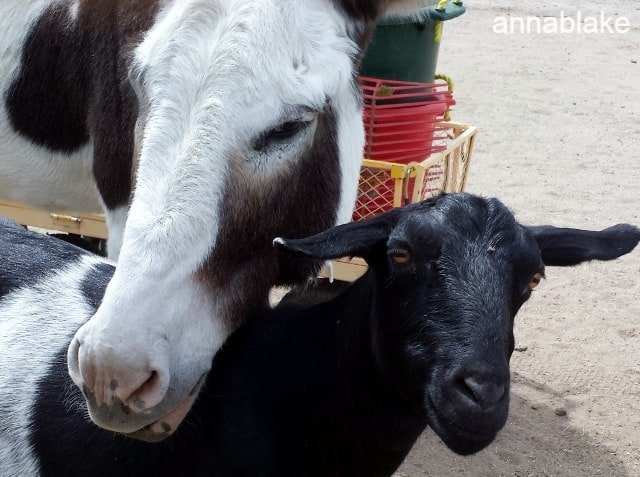 It was innocent. They were looking for companionship, that’s all. Each had suffered a loss and they were drifting a bit, hoping to find a friend. Nobody said anything about falling in love.

Sumo came to Infinity Farm as a kid with his twin Elvis, 12 years ago. They were always carefree and ornery goats, sleeping spoons even in the hottest weather. One day Elvis started to fail; we did our best to help him, and he was gone in hours.  Sumo mourned with elegance and profound sorrow. We were all humbled by the depth of emotion, as he bleated his blue heart dry. Then he began the search for a new twin. Goats are pragmatists.

Edgar Rice Burro came here from a planet with no donkeys. Can you imagine? When he got off the trailer, the two donkeys that lived here brayed at him. He was giddy with glee and reckless abandon. He had no idea! They frolicked and stayed up all night, and relished common sense and good manners. And then one day, the other donkeys were gone, and Edgar was alone again. In a barn filled with horses and llamas and goats, he brayed a melancholy moan with each exhale. Loudly. Unceasingly. Operatically. He took some consolation from the Grandfather horse, he welcomed the visitors from Ruby Ranch Horse Rescue who came for training visits. He’s been known to enjoy the company of a certain brash young filly. He adjusted his life; after all, everybody liked him. He was probably happy enough.

Sumo began his search to find a new twin in the logical place. His first choice was the One Who Feeds. I had my doubts, I work with a couple of dogs in my truck already. The other goat, Just Joe, was a possibility. He lost his twin years ago, but even before that, he had forsaken his species for another, and joined the herd of llamas. Make a choice like that and there’s no turning back. (Not that Joe ever wanted to.) Sumo tried hanging with the Grandfather Horse, who shared his breakfast happily, but the chemistry wasn’t just right. Sumo longed for a like mind and a sideways heart, the kind goats appreciate. 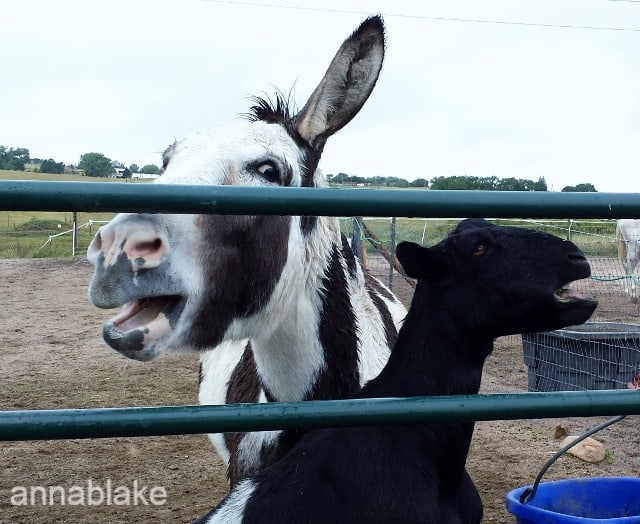 It’s funny, you can live in the same village and see neighbors every day, but then one day something shifts. You catch an eye in a different light, and your attention gives pause. It’s like recognizing someone, when the exterior appearance is unfamiliar. But you know you aren’t a kid, or a donkling. Is it too late to take a chance?

It’s a risk, but Sumo and Edgar have a lot in common. They both really, really like beet pulp. One sings just a little louder than the other, but both of them enjoy vocalizing. (Photo: Edgar and Sumo singing Stand By Your Man. If I hadn’t been yodeling the harmony, I would have gotten audio.) And most obviously, they find each other’s ears very attractive.

Being older and somewhat wiser, they each had low expectations from romance. There are no frantic public displays of passion and drama, it’s more like watching moonrise from a cozy stall. But if you squint your eyes just right, they do look like a very attractive older couple.

Inter-species relationships are always critically scrutinized. Of course, there were naysayers. Some say that goat only wants a bigger donkey-sized piece of shade! Others say that donkey only wants to steal Sumo’s hay! Some were jealous of the comfort, some just don’t like change of any kind. Not everyone wished them well. 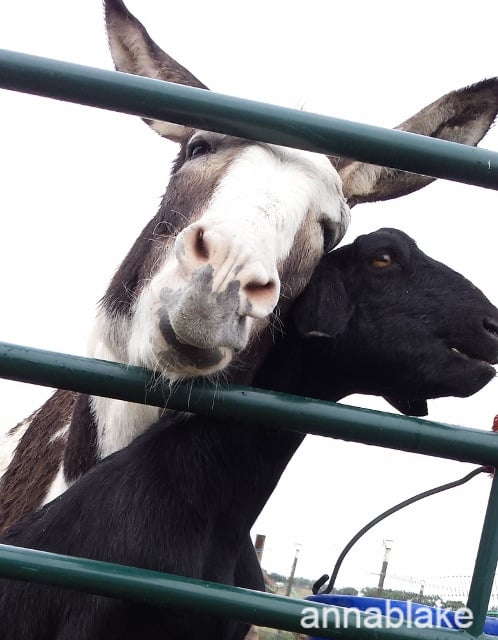 Sumo and Edgar think it’s worth weathering the resistance. On cool fall days, it’s nice to have someone to scratch, someone to lean on, and someone to watch the change of season with.

Shared joy is a double joy; shared sorrow is half a sorrow.  ~Swedish Proverb

It’s a simple life on the farm. Time passes and sharp edges are eventually burnished to a dull glow. Even flying in the face of convention becomes an ordinary occurrence. Maybe in the end, all any of us want is acceptance. The rest is all apples and carrots.

12 thoughts on “An October Romance.”