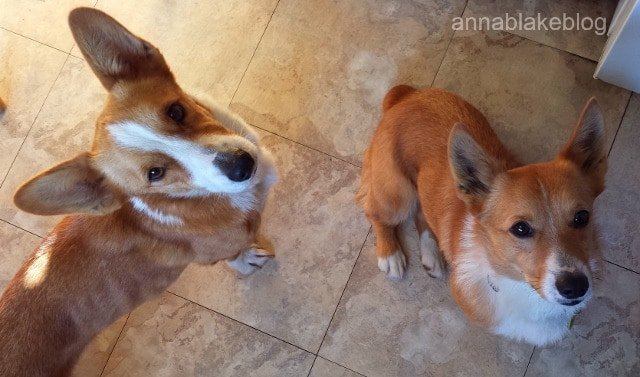 Did you know there is a Corgi Witness Protection Program? Do you have room for a dog with a history?

It’s the one year anniversary of the day that Walter came here from Wyoming to rescue the Dude Rancher and I from the peace and quiet of the Colorado Prairie. He’d done a few things he wasn’t proud of and wanted a fresh start in Colorado. The Corgi Witness protection Program was his ticket to a normal life, meaning a wiggle party with lots of yodeling and frapping with the ducks. Walter got his lure coursing title (read here), and shared his feelings about the whole Predator/Prey thing (read here.) He’s had a good year.

Our biggest feat of training was Walter sitting on my lap. No, it isn’t that easy if you spent most of your time before in a crate. He’d get on my lap but then the joy, the bliss, the total euphoria was so overwhelming that he’d almost spontaneously combust. Eyeglasses got smeared, earrings flew, and shirts got torn. His love was all elbows, toenails, and spit; his love was dangerous. Now he can rest against me and last week, he fell asleep on my lap. He’s home and the barking can rest.

I was thinking of how we would celebrate this year of living loudly with Walter when I got the email. Warning: Rescue people never forget you. The Wyoming rescue emailed me about a Corgi in Texas. Want to know their secret weapon? They flattered me. They said he was my kind of (too much barking) dog. Like any dog still breathing isn’t my kind of dog.

I know tidbits about his past: He and another stray came into a pound together. Herding dogs are famously bad in pounds, not that any breed is good. The Texas rescue stepped in to help. The corgi got his name during the car ride back to the rescue. It seems the good person driving him thought perhaps he liked the sound of his own voice just a bit too much. She named him Preacher Man. Uh-huh.

After the usual vet visit, complete with a check-up, shots, and the hormonal nip and tuck, Preacher was ready for a new home. He was adopted with full disclosure to a ‘trainer’ looking for an agility prospect. And returned a few weeks later. Being a domestic animal is tough, people can let you down.

See it from their side. When a herding dog gets separated from his herd, whether by accident or intention, it means they have failed the job they were born to do. That’s a horrible mistake for a dog with a Type A instinct. It’s enough to make you bark hysterically until you are so hysterical you can’t stop barking. Then more separation, and naturally, more barking. And finally, if getting moved around starts to be a habit, a dog could lose track of his own heart. What if he is barking to be found?

Well, so what if he likes the sound of his own voice? My clients will tell you that I’m the exact same way. And we both hate vacuum cleaners… passionately. And yes, his relationship history is a bit checkered and mine… well, you know where I am headed with this. I’ve had dogs with better morals and personal habits than mine, and to tell the truth, it was like living with someone else’s spinster aunt. I’ll take a bad dog any day.

Preacher has some things he needs to say. I listen, not that my hearing loss doesn’t come in handy sometimes. Reward the good and ignore the rest, and with some patience, his confidence will grow and so will the spaces between the barks.

We talk about this in horse rescue as well, a lot of animals are just one bad behavior away from people giving up on them.  If owners would patiently try again, maybe get some advice from a trainer, things could turn around pretty quickly.

I know there are corgis in local rescues that need homes, and I’m not sure how I got involved with this interstate corgi trafficking thing, but I met Preacher Man at the airport. It was a silent, soulful ride home in the truck, sizing each other up. “Good Boy.” I said, all the way back.

Walter and Preacher Man recognized each other immediately. They sleep like brothers under my desk, they share concerns about the barn chaos when I feed, and they use a team approach to keep me safe in the bathroom. It’s good to feel secure in your own home.

I know what you are thinking: a grey-haired woman who rides horses and has a growing a pack of yodeling corgis underfoot. That’s right. I am becoming the Queen of England. Only different.

Thank you to everyone who makes the effort to help any animal, and especially thanks to the Corgilicious folks in Wyoming and Texas who helped this anxiety-filled little man find his way here. Because…

“The greatness of a nation and its moral progress can be judged by the way its animals are treated.” Gandhi