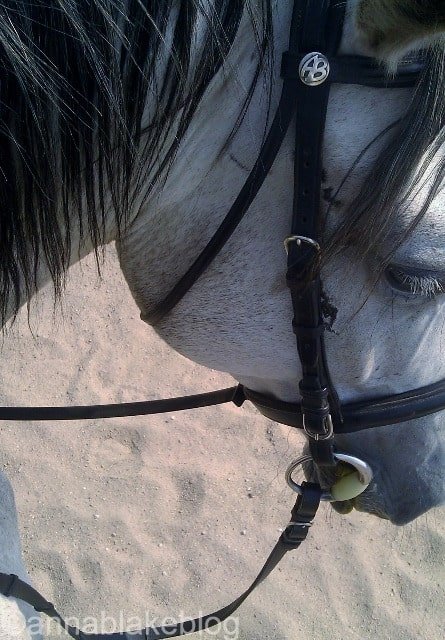 My client’s mare is lovely; a very well-bred athletic horse. When my client bought her, the previous owner suggested my client get a cowboy to ride her at first, she needed spurs all the time and the horse was ‘mare-y‘, whatever that means. I get a little mare-y myself at the suggestions.

My client decided the best course of action was working on the fundamentals. That’s where I came in. My initial feeling was that the young mare was pushed hard and fast. She needed some decompress time and although she looked for the familiar spur pain, we took a slow approach to give her time to notice the fighting had stopped.

The mare was absolutely terrified of plastic bags and oddly, because it was an out-of-context fear compared to her wonderful, smart personality in general. She was not at all spooky.

One day my client sent me to the breeder’s website and I watched several videos of them with young horses. In each video, the humans were aggressively stepping forward, viciously flapping bags at the weanling’s eyes. I got squinty just watching. The young horses were confused more than obedient, and some were truly frightened. The breeders seemed to have no awareness of the response, never gave a release, and of course, there was no reward. It’s just bad horsemanship.

In a way, these sale videos showed fearful rescue horses. Worst of all, I saw what my client saw. The impact of this early work had infected the whole training process. Was this where her defensiveness began? Sure looked like it to me.

No, I don’t think plastic bags are cruel. They are just bags, for crying out loud. There is no innate wickedness in spurs or whips or side reins, or the biggest one for me, bits. This blog topic is in response to a request from a reader. These are her words:

“I’m not talking about clear and extreme cases of abuse, but rather more subtle cases. Perhaps ones where there are no visible wounds or scars, but the methods used are confusing, unfair, and do not take into account how horses learn. For example, when amateur owner with a “stubborn or challenging” horse meets inexperienced trainer. I add quotes because I believe often the horse is just confused or frustrated. I’ve seen cases where horses were hit over and over for no reason – no disobedience occurred – for the purpose of “desensitizing”, or “teaching” it that the owner could hit it whenever they wanted and the horse had to accept it.”

It’s a long quote, but I don’t think I can say it better. Most of us have seen the same thing.

When we don’t get the response we want, rather than checking fundamentals and tuning up the rider’s ask and the horse’s response, we ‘get a bigger gun’: More whip, spurs, a stronger bit. If a little is good, more is better.  This is not just a bad idea, it is wrong.

It starts with good intention, coupled with a video recently watched. (A reminder here, not everyone who is famous for videos is necessarily any good with horses.) On top of this, some of us were born with body perception, those of us who were dancers or athletes, but the rest of us don’t always know what our hands are doing way down there at the end of our arms. Our brains get attached to the technique we are attempting, we get frustrated we are losing forward so we get a little louder, and by this I mean harder, with our aids. Then we are still stuck in our heads thinking about obedience to our aids, and… and…

Oh, yeah, the horse. Maybe he is over-reacting or maybe he is shut down, but in either case you are just now noticing that his answer. There has been so much focus on using the aid, there was no listening to the horse.

People love to complain that with the internet and smartphones people aren’t spending enough literal face time with family and friends. I feel that exact way about training aids. An inanimate training aid never replace an actual conversation where both sides try to understand each other.

If your aid isn’t working and you think you need something stronger, try less. When your horse doesn’t understand, yelling the same thing louder isn’t the solution. Find a way to communicate clearer, use rewards to let the horse know they are getting warmer, closer to the right answer. Remember riding is an art, you need creativity. Lighten up, physically and mentally!

No joke, whisper the cue. Use a calf instead of a spur, or release the reins and ask. Use more brain and less brawn.

“Every aid can achieve the exact opposite of its intended effect through exaggeration and poor timing. The continual rein aid lets the horse get stuck and resistant. The poorly timed or rough driving calf can bring disorder into the legs, the gait. The seat that drives too long and too intensively makes the horse roll away on the forehand.” – Gustav von Dreyhausen, mid-1800’s.

Less is More: It’s the one thing horses are forever trying to train us, the one thing that we just don’t trust. Flies have this down, but humans, not so much.