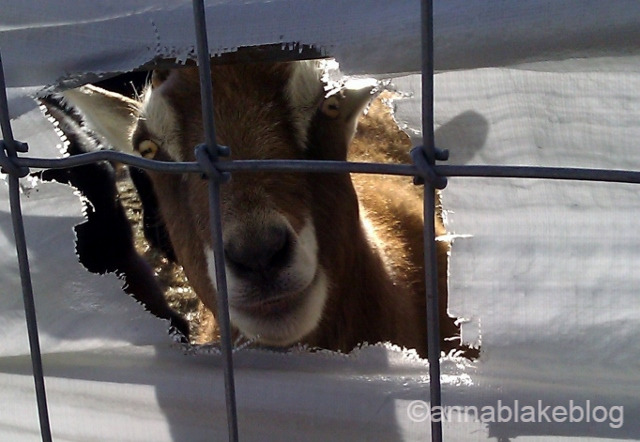 I’ve been trying to not write about goats all week. I wanted to write something inspiring about art and dressage. I’ve kind of been being a goat about it, truth be told. Stubborn. Headstrong. Ornery. But I know when I’m out-goated, so I’ll tell you about Joe.

First, understand that goats aren’t for everyone. You have to be a little bit of a goat to own one. And of course, the term “own” is perhaps an exaggeration. Okay, more of an out-and-out lie.

Goats appropriated my farm the first year I moved here. I got a pair of kids and so did a neighbor, who abandoned her twins within the week–at my farm. I was going to return her pair to the breeder that next weekend. It was too much bottle feeding all of them, and although goats are very friendly and like to take your shoelaces, their number one rule is to put their desires first, no matter what, in every situation. It isn’t that you can’t train them, they just learn what they want.

Then Barney, her blonde goat, fell into a water trough and almost drowned. He was so contrite when I used the hair dryer on him that I decided he could stay, but Joe, the brown goat, had to go back.

I called ahead and Joe got in the cab of the truck with me. I can’t really explain what happened next, but Joe talked me out of it on the way. He was the most unlikable of all the kids, he reasoned, and even if I didn’t like him much, I probably liked him more than anyone else ever would. He was right, he was very unlikable. So by the time we arrived, I left him in the cab and went in to explain to the breeder. She shook her head, pressed a few free gallons of goat milk on me, and sent us back home.

That was when things changed. Joe went through a period of self-discovery. Not all of us get a message as loud as Joe did–his was undeniable. He confessed that he was not really a goat at all. He was a llama, graceful and curious, who was trapped in the body of a short-necked, stiff-legged goat. And he was mad about it.

But that wasn’t the important part. He had fallen in love. Holiday was a young llama back then, with a slightly crooked front tooth and bangs that fell in his eyes. Joe was besotted.

At first, I was naive enough to think that I could keep them separate but several times a day, Joe broke into the llama pen. He could squeeze himself through a tiny crack or weasel the gate; then I would repair the damage and send him back. For a while, he was always out, but I couldn’t find the leak.

The goat pen had wooden cable spools for the goats to play on, but Joe would tip one on it’s side and roll it to the fence. After setting it upright again, he got on top and launched himself over the top and in with the llamas. Smart enough.

I gave up the fence fight. Joe Goat abandoned his twin and went to live with Holiday and the other llamas… but it wasn’t a happy ending. Joe was a jealous suitor–belligerently monogamous. So for all Joe’s years, his love was unrequited. Partly because Joe was a jerk and tried to keep Holiday separate from the other llamas. That and Holiday just wasn’t into goats. It didn’t matter though, Joe was living the dream–but with less hair. Sound familiar?

We lost Joe this week. Just like before, he didn’t want to go–we had a rough trip in the truck on icy roads on a foggy, snowy morning. During the thirty-mile, hour-long trip to the vet, he tried to talk me out of it again, but he couldn’t stand or even hold his head up. Even then, he was a stubborn old goat, almost impossible to get along with. That was what I loved about him.

Don’t feel sorry for Joe. He had a great life, he took the world on his own terms. He lived an alternate lifestyle on a liberal farm that had tolerance for narcissistic ruminants. And please, no platitudes. He courted no sympathy before and I can’t imagine he wants it now. Joe isn’t the rainbow bridge sort. My guess is that he’s broken out, found the caretakers picnic area, and jumped on the table and eaten the melon salad. Again. 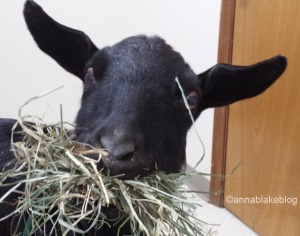 Now Sumo is the last goat standing–15 come spring. He went for a check-up this week. The vet says he has outlived his teeth and they’re getting too long. But who am I to judge. I get horse hairs growing out of my chin from time to time.

Why should anyone care about the insignificant lives of two old goats? In the course of the world, our lives aren’t any bigger than theirs. Joe is a better teacher than some. If he cared, which he didn’t, he would probably have asked if you were getting your way enough. Sometimes you just should, you know.

Finally, if you feel a need to remember him someway, which again, he would think was stupid in the first place, perhaps the thing to do is be an obnoxious pain in the butt and insist on it being all about you–at everyone else’s inconvenience. Then bleat about it.

0 thoughts on “The Last Goat Standing.”