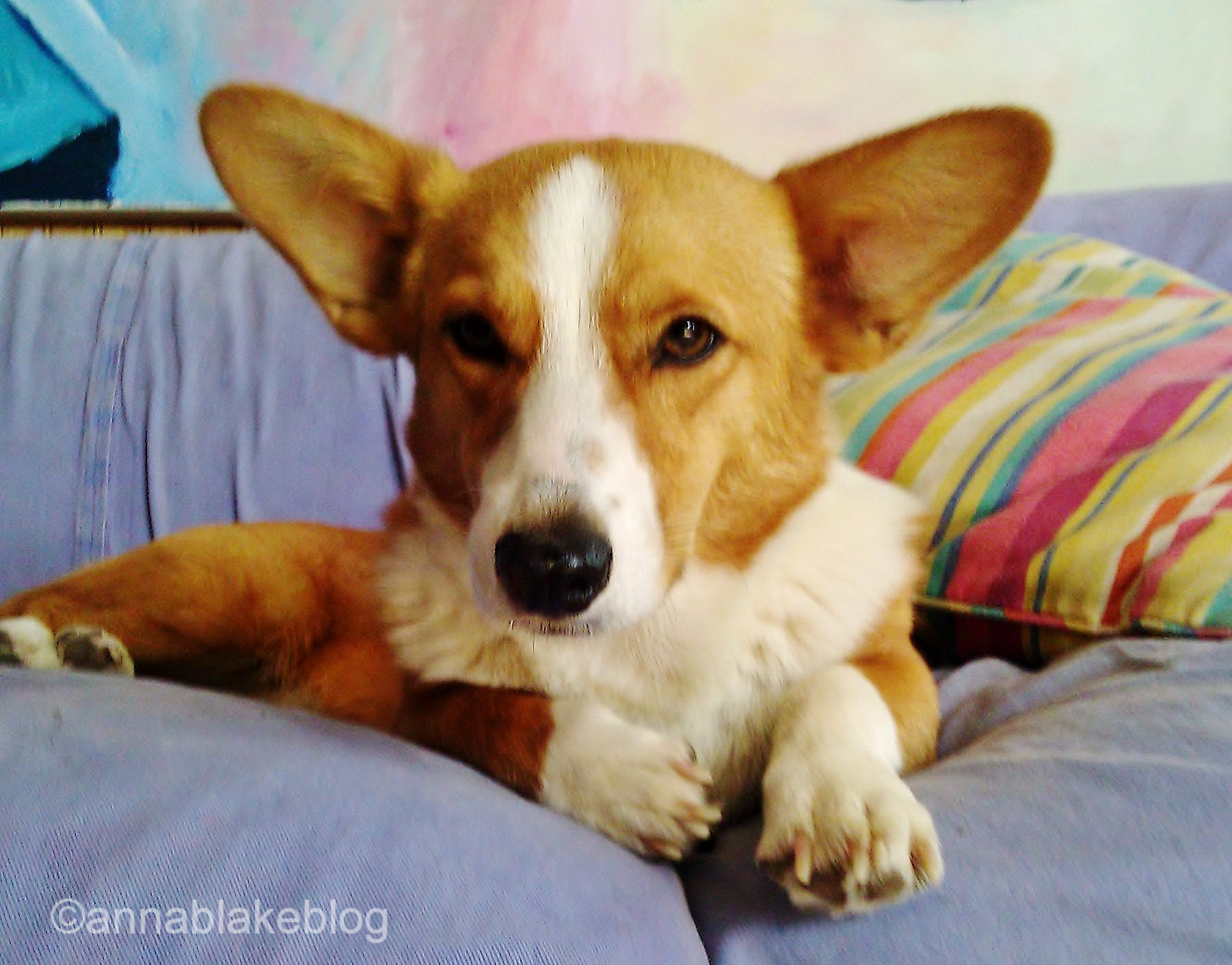 Thanks for not mentioning my big nasty scab. I woke up last week with a corgi toenail inside my ear. It was attached to a corgi…running in mid-air… trying to find traction…in a fight with a sleeping Briard…next to me on the bed…at about 2 am. The Briard was totally disoriented by the attack. She’s 12 now and she doesn’t wake up limber or alert. Neither do I. There was a lot of flailing and moaning. The aforementioned corgi, Walter, continued barking frantically while still airborne, and then Preacher Man, who always absolutely loves the sound of his own voice, joined in. Night terrors.

Things have been a little rough in here at the Less-Peaceable-Kingdom the last few months. It’s Walter and if you’ve been following along, he got a diagnosis (read here) that he couldn’t care less about. Hold on, I’m getting to the positive training part.

Walter is great. He never wants anyone’s sympathy–not while the ducks are pooping just on the other side of the fence. Lately I can tell things are sliding for him. He is a little frantic all the time. The whites of his eyes show too much, like someone pretending enthusiastiasm about math. Even his tongue has anxiety. And he naps too much. He doesn’t want us to think he is getting weaker, so he picks fights with all the dogs. Not the cats, he isn’t stupid, but he fights with his friends. We all know it isn’t who he is, but it’s the way he can let us know he’s lost confidence.

Not his fault. Part of positive training is making sure the dog (or usually in my case, horse) is physically well. Walter isn’t. Period. So we mitigate when we can, keeping him separate but not alone. He always gets the best spot on the sofa, between me and the Dude Rancher, on pizza night.

It’s been 20 months since his diagnosis–meaning 20 trips back to the vet. In the beginning it was the worst thing. He clung to me, pleading with a nervous twitch, to save him from the utter cruelty of the vet. See, every visit includes a blood draw. A needle for him and for me–his toenails impaling my arm. As my good vet took him back, he gave me that look. You know the one–warning me that I’d be really sorry if he died right now. He got treats all through the needle process. Then he returned to my lap, pathetically clinging and desperately frightened. Sometimes he would close his eyes and pretend paralysis while we talked about the test results.

I hear Corgis have a bit of a reputation with vets sometimes… Selling the notion of positive training is much more challenging when needles are involved. But each month we were back to check his meds. Walter says the good thing about taking all those pills is that it takes a good sized wad of patè–and by patè I mean canned hepatic dog food–to hold them all together. Yum.

Walter has outlived his prognosis by almost a year. He thinks only suckers believe that stuff in the first place. Walter doesn’t actually like car travel, especially the rumble strips, but he loves to go for a ride. He’s a complicated guy that way. When we pull up to the vet’s, he peers over the dash with a sly smile. This last trip in, the women at the front desk pulled out the treat jar as soon as he came through the door. He is barely tall enough to see over the edge, but he stands up and they oblige him handfuls of treats just for coming in. It took much less than ten minutes to train them. As long as he stood there, the treats kept coming. By the time he got on the scale, he was up a few ounces. We fight to keep weight on him, but I knew this weight gain was all extremely recent. I offered to pay a treat surcharge since they use the smelly moist liver kind. 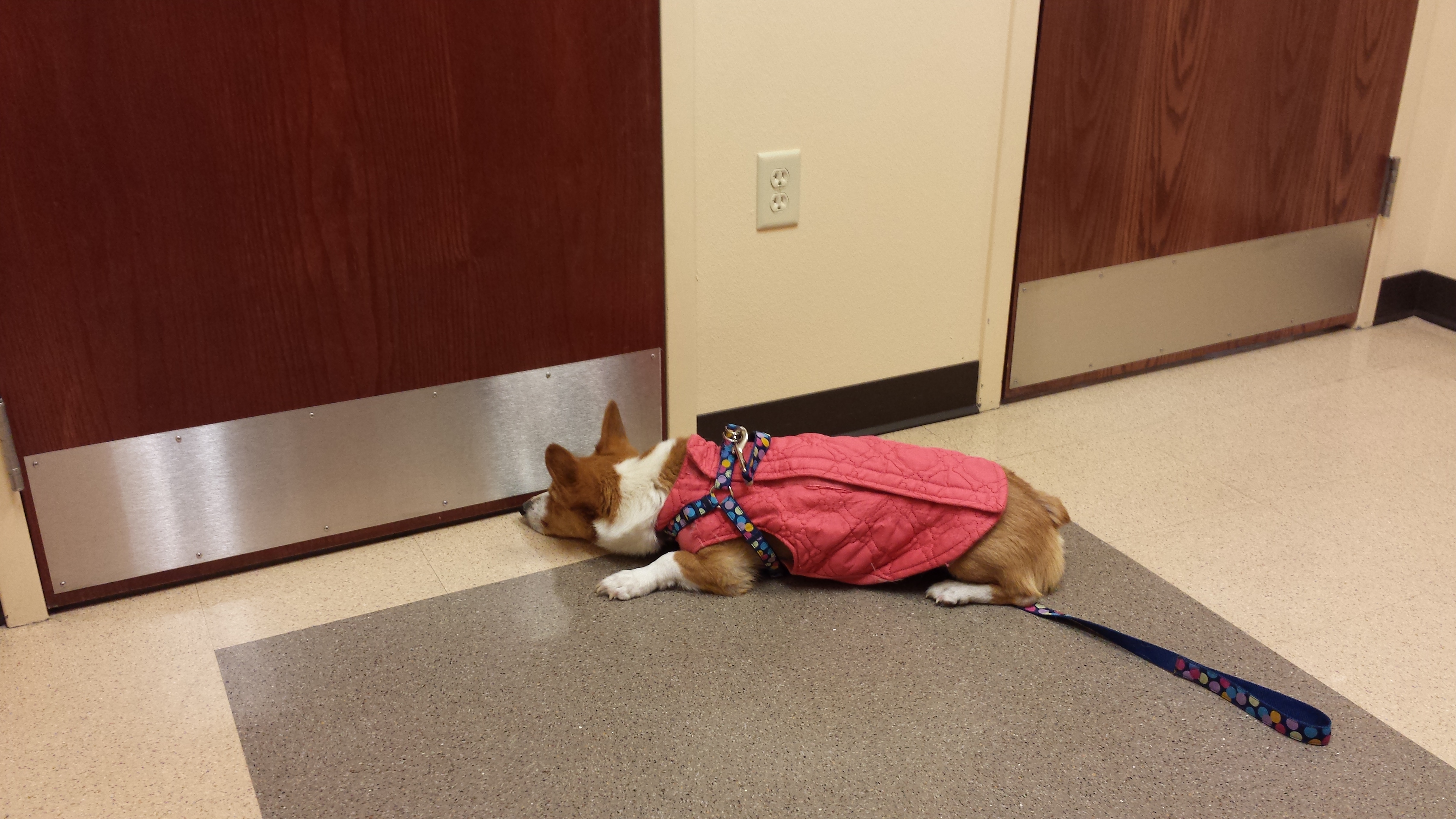 This photo is Walter waiting for the vet at our last visit. Sometimes it takes her forever (5 or even 7 minutes) to come in. Blood tests confirm what his recent behavior shows–but he loves her anyway.

My vet is a genius–I know Dr. McKenney (at High Plains Veterinary Hospital) has given us this precious time. It’s a fair-sized practice, with several perfect employees who all seem to know Walter. It probably happens when the patient comes first.

Walter would tell you that he’s just that wicked good at using positive reinforcement training on humans. But that’s how the magic works. It doesn’t matter who starts it in the beginning–it becomes a habit and pretty soon we’re all smacking our lips and singing Give Peace a Chance. It’s not just a training method, it’s a lifestyle.

There is so much that is out of our control in this world. You never know what tomorrow will bring. It could take you a while to find your forever home, only to find out… well, just thinking about it all could get you down. But life’s too short to spend pouting in detention. Better to have a party and get to be smart all the time. Dance the good boy dance and teach them to reward you every moment.

Now, enough of this bliss ninny chatter, I think I hear the vet coming.