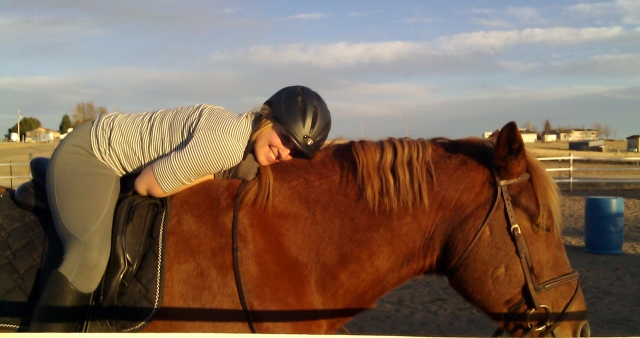 August 1st is International Helmet Awareness Day. It’s the day Riders4Helmets started, in the wake of US Olympian Courtney King-Dye’s traumatic brain injury, to raise awareness and promote equestrian helmet use. Helmet retailers join in by giving discounts and tomorrow is the day.

This is the fifth year and every year I write about helmets because it’s so important. Every year, I repeat statistics like this: Equestrians are 20x more likely to sustain an injury than a motorcycle rider or that speed makes no difference. Many brain injuries happen while mounting. Last year I wrote about nearly getting in a bar fight on the topic. Previously, I wrote about a woman I met in a nursing home who haunts me still; she’s living my biggest personal fear. Every year riders who wear helmets cheer this day. Preaching to the choir is easy–and the other side is dug in and defensive.

If helmet use was about needing logical proof, overwhelming statistics about brain injury would convince people. There is no debate. Helmets are like seat belts; they save lives. Still, we had to pass a law. We pride ourselves in being the superior species but still put our politics above our intellect and common sense. Everyone has heard it all before and it’s disheartening. Even now mothers ride without helmets, mothers allow their children to ride without helmets. There’s an argument this conversation is hopeless. Does stubborn, self-defeating, belligerent foolishness–masquerading as personal choice–ever wear you down?

Instead of more ranting, can I tell you what I love about gravity? It’s dependable, as consistent and fair as any notion around. Gravity has no respect for governments or religions. No respect for emotions or personal codes. Gravity is a natural law. It’s never up for re-election, it isn’t racist or sexist or ageist or any other ‘ist’ imaginable. Gravity treats each of us equally regardless of income. Amen to that.

It’s enough to give you a real love of black and white distinctions in our world of gray excuses. There’s no buy-out. It isn’t personal. No one gets a pass, and as much as humans love to think they are the exception to the rule, none of us are. Preach personal choice all you want. Defy gravity on moral or ethical grounds. Have at it. But gravity will ignore us and our arrogance, while it pulls us down to collide with the truth.

What is it about humans that we squander our gifts? How did we get so ungrateful as to value our brain so little? I understand and respect ignorance, but how did it come to pass that willful stupidity became a valid choice? We lose horse-crazy little girls and strong equine professionals and backyard riders all the time. We languish in hindsight, wishing we had a do-over and even with that knowledge, some of us still think we are immune. None of us is that lucky.

In the end, gravity will win. Before that, Alzheimer’s will take some of us. It’s as uncontrollable as gravity.  None of us knows the future, but of all the gifts I’m blessed with, it’s my mind that I value the most; it’s my door to a world of wonder and beauty and freedom.

Last year someone posted a comment on my blog that I saved in my file of statistics. A woman said, “I wear one especially when on green horses because my daughter-in-law refuses to change my diapers.”

I had to laugh. My good brain will always giggle at gallows humor. It’s funny, unless of course you remember a young woman, confined in a nursing home, wearing diapers.

Humans. We’re supposed to be the smart ones but we could take a lesson in self-preservation from all the other “less-evolved” species.

A reminder that my memoir, Stable Relation, is on sale at all online booksellers. Here is the book trailer; you can find my author blog at www.annablake.com or on Facebook.