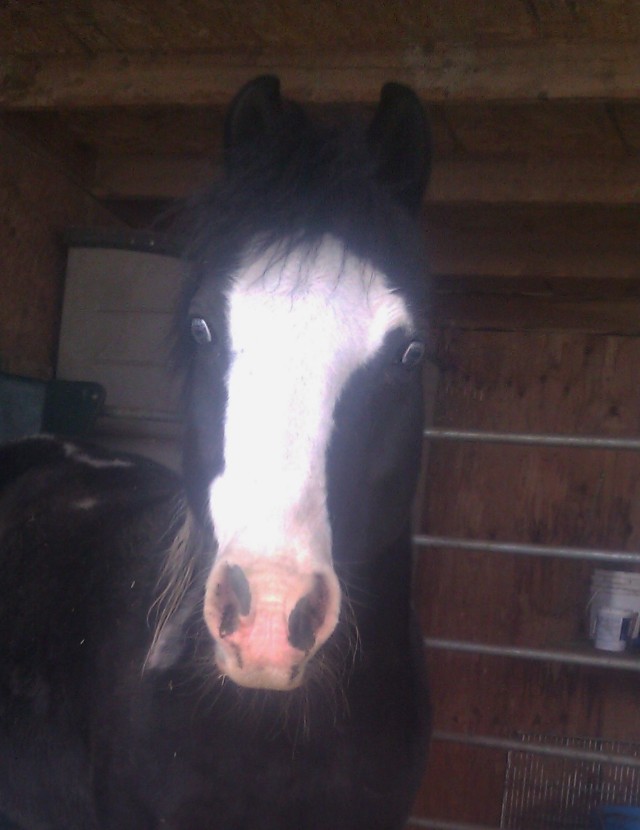 Last week I wrote about loitering in the sun with horses and not feeding carrots. People who train with treats spoke up and I agree; during work sessions, treats are positive motivators. In fact, there are times that giving a treat has been my end goal.

Breezy was a small pinto pony who came to my client’s barn as part of a real estate deal. They had room with their other horses and in the beginning, he was a favorite with the neighborhood kids. Somehow over time, he became more and more fearful until he was impossible to catch. That’s where I came in.

Pony CSI: Breezy was almost too handsome; a black and white pinto with wild blue eyes. As I watched him, the owner told me the family had tried. Their daughter was a teen rider who did her best, but had no success. The dad had played with him some, but after hearing the description of their game… well, good intention but a dangerous miscommunication. Then two different horse-people had offered to help, each saying it would be an easy job. The pony was just a little spoiled, was all. Eventually both people gave up in turn, leaving Breezy frightened and untouchable. By now his hooves were at least an inch too long with huge chunks broken out.

Breezy faced me head on and his eyes did not blink. Ever. They were so round and tense that I thought they might pop right out of his head. As I stepped to one side, his hind legs crossed over, almost twisting his front hooves but never releasing his full frontal position. His body was tight, every molecule braced. He used no calming signals; he was shut down and over-stimulated all at once. During the next hour I didn’t make much headway but I was hooked.

What a training quandary: I didn’t think he’d be a quick re-train and ponies don’t cost less to work with than horses. I asked if she might consider relinquishing him to a rescue. I was thinking perhaps I could foster him, as I had other ponies, until the kinks got worked out. But the owner said no; Breezy was their responsibility and they’d support him. She hoped I’d take him on.

In a few days I was back to help load him into their trailer. Breezy was in a stall when I arrived, so haltering him only took a little over an hour and by mid-afternoon he was in one of my runs, his backside wedged into a corner while facing me with all his might. Breezy ignored his hay and didn’t drink. I never saw him eat once that first month, but I put out more hay and mucked every day.

And we had stare downs. One day I took an apple in with me, ate a bite or two, and offered the rest to Breezy at a distance. He panicked and bolted past me. I lowered my eyes and exhaled an apology, while he quivered at the end of the run. So that was how they tried to catch him. Horses will tell you everything.

Was he abused? Some people thought so but I wasn’t so sure. It didn’t matter; Breezy thought he had been and that was the only opinion that counted. When horses take something to heart, they’re no different from us. I didn’t threaten him with fruit again. I know it sounds crazy, but for all his avoidance, I always knew he was fighting to find his way back.

Change came slowly. Haltering was possible if he was in his safe corner and I breathed more than I moved. Finally I was able to pick up his feet, but touching his body remained impossible. Still no blinking, but I found a way to use our stare downs in his favor. I’d take a step to the left and his head followed me, and then the same to the right. I did this passive two-step back and forth, again and again, and twenty minutes of neck sway later, his poll seemed to relax a bit and he blinked. So did I.

Here’s where I share my favorite training aid. Some swear by clickers or flags, and a well-timed piece of carrot can be a miracle. Because horses are all a bit different, I’ll always believe the best aid available is our own creativity.

We continued that warm-up every day, followed by some obstacles in hand. He was totally fearless marching through the llama pen and the plastic wading pool. He matched my stride on a slack line, but if he felt a drop of pressure on the rope, he sat back violently. People remained his biggest fear.

Breezy was a hard case; I respected that. A year passed. The farrier could trim him if she hummed and made no sudden moves. I could hand groom him but curries and brushes were still too much. He was far from okay but he couldn’t stay forever. Finally I asked his owners if I might try to find him a suitable home.

A couple of weeks later a friend of one of my clients arrived. Breezy was in the round pen and I asked if she’d like to go in. I’d been brutally truthful on the phone, but she still looked surprised when Breezy bolted away from a small boy who walked up. She spoke in a sweet high voice and reached toward him but he acted like she’d cracked a bull whip. That was the moment Breezy went beyond cute and became interesting. She listened and took her groundwork down a notch, and then even quieter. A half hour later, both Breezy and I were impressed.

I got updates frequently during his first year with her. There was a wonderful photo of Breezy standing–not all that tall–between her two Thoroughbreds, the proud herd leader. His new owner gushed about his progress and renamed him Joey Try. Finally, she told me that after some weeks of watching her other two geldings chew contentedly on theirs, this brave pony was able to accept a carrot from her hand.

Training is an ART and human logic doesn’t always rule. Sometimes carrots are complicated. Then other times, they’re just sweet.