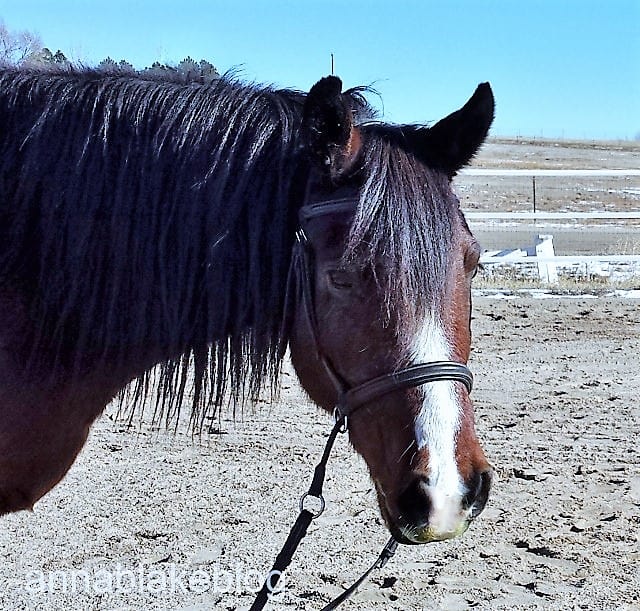 A few weeks ago, I was standing, talking with a client at the end of her lesson. She was at her horse’s shoulder, close enough that her sleeve touched him, and he had his head curved toward her. He wasn’t mugging her; just standing. My client said, “I suppose you don’t think I should let him be this close, do you?”

It’s a well-known fact that all riding instructors live for the sole reason of ruining any good moment a rider might be having. And it’s a common event that we talk about horses when they are standing right there, so the answer was clear. “Let’s ask your horse.”

I was about six feet away and I asked my client to step back as well, out of his space, and let the lead rope rest on the ground. That last detail is important. If we hold the rope, even loosely, the rope moves as our bodies do, but if it’s resting on the ground, it’s a clear, undeniable message. It’s the difference between waiting on hold and hanging up the phone.

My client and I continued talking about the lesson and a minute–just a minute–later, he dropped his head low. He exhaled a long slow breath and loosened his jaw. His body got softer and quieter. His eyes closed part way. Neither of us had seen stress in him before but he was clearly and obviously more relaxed. This good gelding is a stoic sort of horse; sometimes you learn more in hindsight than in the moment.

For today, I’ll define release as ending the conversation (whatever training or work you were doing) and letting the horse be. The physical part of that is easy. In my example, my client had dismounted, taken off his bridle, and put his halter on, all the while standing within a few inches of him.

The mental release is a good deal more complicated for us humans because it involves ego and desire and horse-crazy girl fantasies. In other words, it involves putting the horse first. We all like to say we put our horses first.

And we want to give a reward. There’s no doubt that a horse responds to a kind word, a warm touch, or even a physical treat. Humans like that interchange, too. We revel in that moment of connection and gratitude. I don’t want to negate that in any way, but this sweet gelding told the truth. He was still, at the very least, wary of us. And if taking a step farther away would release that feeling, why wouldn’t we do it?

The easy answer is that it isn’t flattering to us humans. I remember the first time I heard that the best reward for a horse was release. No, it couldn’t be true. I confess joy in mugging a horse, but even more than that I just hated the thought that my horse didn’t appreciate my cloying affection. Like a first boyfriend, I wanted my horse to hang on my every word and want to cuddle and coo. And for the horse, just like a first boyfriend, he’d rather have the relationship than talk about it. Ouch. Just ouch.

A horse who mugs a human isn’t being affectionate. When he searches your pockets for treats isn’t cute; it’s a moment of anxiety.  It’s the insecure kind of behavior a weanling might do in a herd, but not a confident adult.

Gaining the confidence to hold his own self up may not not be easy at first. If his lacks confidence, you might have to shake your lead a bit, almost like asking him to back, before letting the rope hit the ground. But if you ask him to step back, then you do the same. It might take more then one try and he’ll need time to understand. Help him find that distance easier. Say good boy. Rest. Then watch his honest release response.

The ability to cleanly release him from your mental expectations, no matter if you are fearful or bold, might be the highest sort of leadership, but we have to get our emotions out of the way to do it. Engendering an experience of safety and consistency is the basis of a bond with a horse. It’s the comradery of standing together, confident, with no need to prove anything on either side. The other word for that is respect.

Back in my martial arts days, we were taught that a human had a personal space that was about three feet in all directions and it was considered an aggression to enter that space uninvited. I was an introvert and sometimes confused with social parameters. I appreciated that this three-foot rule gave me a kind of line of demarcation; I could choose to hug someone, or if I felt uncomfortable, I could step back, and use any number of the same calming signals I saw horses exhibit. Acknowledging that we are similar animals to horses, it was easier to understand the confidence he could feel from an honest release.

Yes, the exact word is confidence. Isn’t that the elusive goal?

So try this experiment: Give your horse a complete and honest release. Start by standing a few feet farther away than you want to. Still your body, drop your weight, soften your shoulders, and cock a hip. The soundtrack for this is Sting’s Set Them Free.

This last part takes discipline. Inhale. Pause. Exhale. Finally and most importantly, let go– free as a bird—release any expectation and judgment of him that you’re holding in your mind. When you have done it for him, then do it for yourself as well. Be the kind of leader he needs.

0 thoughts on “Release: The Unflattering Truth”