Part Two: Norman, Is That You? (The Reactive Horse) 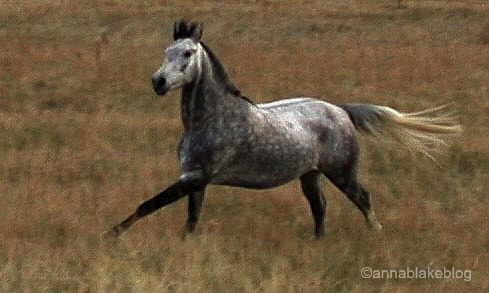 Last week, I wrote about horses who are The Strong Silent Type. This horse is the opposite.

Describing him sounds like reading the judge’s comments on a marginal dressage test: Tense in the back. Tight in the poll. Hollow. Too quick. It doesn’t stop there. He has twitchy eyes, a furrowed brow, and he clenches his jaw. Sometimes his head is so high you almost unable to see around it and the muscle under his neck is stronger than the one on top. His flank feels rock hard and his breath is as shallow as yours.

“We all go a little mad sometimes.” -Norman Bates, Psycho

And it isn’t just physical. It’s the way his mind works, as well. He reacts; when a different horse might reason it out, he jumps to conclusions, usually the worst. Everything seems like it’s on the big screen; he’s dramatic and impulsive.  Sometimes he gets sullen, almost pouting, and a minute later, he’s hysterical, jigging as if his hooves were on hot coals.

He’s just really sensitive, they say. Really? I consider most horses on a continuum; one end being stoic and the other end being reactive or demonstrative. It isn’t that some horses are more sensitive than others; they just express their emotions differently.

My horse acts this way because he’s hot-blooded, they say. Sure, some breeds are more energetic and athletic than others, but to my eye, many of these reactive horses look frightened or in pain. Can the rider truly tell the difference between personality and behavior? Are they certain he is sound?

Does your horse make strange faces? Maybe he twists his neck and chews his tongue. He paws with impatience and pins his ears when it’s suppertime. Or he grinds his teeth, or flips his head, or you can routinely see white around his eyes.

Could your horse have ulcers? They are ridiculously common and practically all the behaviors I’ve listed so far could be symptoms. Think about it; no one denies the connection between ulcers and colic, still horse’s number one killer. On the high side, we didn’t always know as much as we do now; it’s actually a great time to have ulcers. There’s so much help available. (Just to clarify, stoic horses have as many ulcers as reactive horses do, but worse, they just keep it to themselves.)

What if these behaviors that we correct or punish are actually calls for help?

She’s just mare-y, they say. No, mares aren’t just naturally cranky. Their hormones make them more like stallions than geldings… and ovarian cysts are one of the most under-diagnosed conditions. On top of that, the discomfort of that situation could cause a secondary condition of ulcers. So, lighten up on name-calling mares already.

He’s an alpha horse, they say. But just like humans, leadership isn’t the same as dominance. The herd hierarchy has much more nuance than that. In my experience, alphas like a break from trying to control the universe and enjoy the peace that comes from positive training.

He’s never quite mean, they say. It’s almost like he tries too hard. Exactly! Reactive horses are responsive, intuitive, and connected. They have contagious enthusiasm, backed by intellect. They are radiant and intense and luminous. And yes, they have hearts that burst with try. Don’t believe me? Watch a thoroughbred run in slow motion.

More often, it’s us that fails them. We think it takes courage to ride a reactive horse, but what if compassion is really what’s needed?

Disclaimer: Horses are fully dimensional sentient creatures. The continuum between stoic and reactive is meant to help understand that horses are not brain-dead plow-horses or ditzy hotheads. They are individuals with complicated combinations of temperament, training, and past experience.

Anxiety is a different thing entirely, not necessary, or permanent. There are positive solutions that will build partnership, and from that place of security, allow the horse to give you his most brilliant work. Essential point: A good rider listens to every horse with wide-open ears, accepts who the horse is, and then begins the conversation right there.

How to best partner with a reactive horse? First, don’t minimize his intelligence. And you might want to sharpen your own attention a bit. Now, if you want to dominate something, control your own self; make your seat soft. Breathe slowly, deep into your lungs. Require your cues to him to be invisibly small. Most of all, don’t pull on his face. Why make him feel claustrophobic when the responsibility for elastic, soft contact belongs with the rider?

Horses and humans both tend to speed up when they get nervous or think they’re losing control. Resist the urge. Go slow. Runaways happen one step at a time and if it seems like the energy builds stride by stride, perhaps he’s never been taught the joy of a downward transition. (Stoic horses excel at this.) Reward him for doing less.

Walk a lot, then ask for a trot, but in just a few strides, before he accelerates, exhale back to the walk. Repeat, and for now, always bring him back before the anxiety grows. (Neanderthal training methods would say that you’re teaching your horse to quit by cuing a short trot, but nothing could be farther than the truth. Running a horse until he’s tired and submits doesn’t train him; it institutionalizes anxiety.) Downward transitions allow his trot will be more relaxed because he knows how it ends. Teach half-halts and halts from your leg. Leave his face alone.

School lots of downward transitions, with immense praise. Breathe. Let it be a slow dance.

Reward the least thing, so he understands that less is more. Let your mind be slow; he’ll take the cue from you. Give him the confidence to let go of his fear and know he doesn’t need to try so hard. Then, when his poll is its softest, shut-up, jump down, and step a few feet away from him. Watch him bask in the glow of being anxiety-free. See him stand quiet and still, let his eyes go soft, and droop that bottom lip.

Confidence is the greatest gift any rider can give their horse. Period.

The ultimate goal is riding well enough to help each horse find the center of this stoic/reactive continuum. So, with trust and contentment, the horse is free to feel the dynamic strength and power of his own body. Relaxed and forward.

Posted in Dressage: Relaxed and Forward, helping horses, Horses/Equestrian, The Art of Riding

0 thoughts on “Part Two: Norman, Is That You? (The Reactive Horse)”