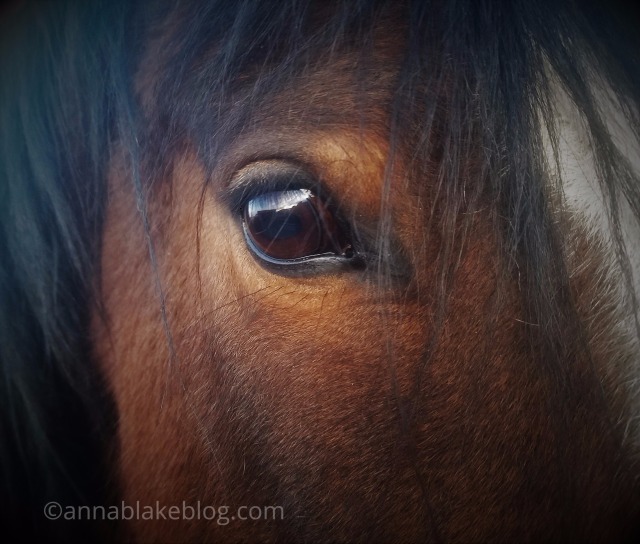 Thanks to a request, I’m writing about the half-halt. Ever notice how every definition you read starts with the disclaimer that it’s the most misunderstood concept in riding? Not very encouraging. It goes on to say that it’s a cue that combines both whoa and go. How hard could that be? There’s squeezing and driving and pulling, but not too much. Eyebrow squint. WikiHow has an article about how to do the half-halt in twelve easy steps. Are you kidding me?

Disclaimer: I love the discipline of dressage, but sometimes they make it sound a little harder than it is. (It’s okay, I’m sure they think I’m a little “simple” from time to time, too.) Dressage uses complex concepts, described with intellectual precision. I learned half-halts this way, but it’s enough to make a rider seize-up in the saddle with over-think-itis, a common dressage malady. Especially if you’re passionate about riding and try too hard, like I did.

The USDF definition: “The half–halt is the hardly visible, almost simultaneous, coordinated action of the seat, the legs and the hand of the rider, with the object of increasing the attention and balance of the horse before the execution of several movements or transitions between gaits or paces.”

It’s an okay set of words. I just wish they hadn’t included hands. Riders tend to over-do with their hands, so why encourage it?

Not surprisingly, horses have a definition that’s a bit more intuitive. I’m bilingual; let me translate for you.

A half-halt is a re-balancing. Can we all agree that balance is way more crucial for horses than we give credit? We want the horse to balance a bit of his weight back, but I hate to say “back” aloud because, again, we tend to use our hands too much to start with. Hands are over-rated; trust your body instead.

The mental part of the half-halt isn’t always talked about but that’s the mysterious part; the part beyond the physical cues. A half-halt is a mental re-balance as well. It’s an instant that affirms the connection between horse and rider in that moment, but also in the near future. It’s a blink of acknowledgment that the two of you are together, as well as a hint that something’s coming …wait for it. The challenge is timing. By the time we remember to half-halt, it’s too late, and the horse can’t respond in time.

To further confuse the horse and rider, there is a long list of actions used to ask for a half-halt, some big and bold, some invisible. Riders tend to like a dramatic cue using several body parts, physical strength, and a few math skills, while horses like the soft, silent kind. They taught me to do it their way.

The first rule about half-halts is that you must do it in time… think of it as a discipline of preparation. You might half-halt to begin to prepare for a transition. One more half-halt to actually prepare, and then the transition. A half-halt asks for his attention but it should feel light and happy to him, like it will be fun. “Oh goody, a trot’s coming…”

The physical part for the rider can be as simple as a breath because a breath resets the body. The inhale realigns your spine, your shoulders slide back as if you have a hanger in your shirt, which in turn realigns your arms and wrists. Let your hands rest. If anything, your hands slow an instant to feel the contact an extra second. Your seat straightens in the saddle. You can think of each of these things separately, because it’s harder, or you can take a big inhale for an upward transition and your body will follow naturally.

An exhale softens your body, stills your seat, slightly deflates your horse’s movement, and like a plane, you glide in for a soft landing. Use an exhale for relaxation or a downward transition, and melt any stray resistance.

If there is no response at all, ask again and perhaps add a slight tightening (upward) of your seat muscles or a loosening (downward). Does your horse respond? Praise him for his attention. Then breathe and cue small again, always trying for less. Think invisible.

I find a light pulse with my thighs backs up my breath even better than seat muscles for most horses… so an inhale, and if needed, a thigh pulse for more energy, or an exhale and thigh pulse for steadiness or relaxation.

At first your horse may have no idea what you are asking for. His response to you might feel like a dubious, “Huh?” Cheer his effort! This is about subtlety; a tiny half-cue that creates an energetic half-pause, lays the foundation for a relaxed transition. Give him time to figure that out.

Does your horse ever resist a cue from you because it seems abrupt to him? Perhaps he’s trotting in a relaxed rhythm, when suddenly, out of nowhere, there’s a canter cue –gasp, toss head, counter-bend, throw out a lead leg, and hope for the best. A well-timed half-halt is the antidote.

Then a few strides into the canter, he begins to speed up. Pull on his face if you want, but he’s probably tense in the poll already. Besides, you’re trying to have better hands. Think about a better rhythm in his canter. Breathe. Focus your body. Reset his speed and steady him as your body realigns. Yay, you did a half-halt.

If this seems entirely too easy and you need to make it harder, may I suggest taking up chess? It’s meant to be a war of the mind and there’s an opponent.

Regardless of the gait, and especially at the walk, if you half-halt kindly, with a generous reward when your horse responds, you might feel his back lift just a few millimeters. Reward him with a huge exhale and soft hands, because when he lifts his back a bit, your half-halt is on the way to becoming the cue to bring his head to the vertical without pulling. It’s this instant that makes you really… no, really… believe that a half-halt has mystical properties.

Half-halts aren’t trained in a day. Every horse is a slightly different individual. Every rider has a unique language. Rather than reading even more books about half-halts that eventually put both of you in a complete tense-halt about the topic, breathe and half-halt your own critical mind. Crank up the music, and while you and your horse are dancing, offer a half-halt. Ask your horse what he prefers, and then let yourself be trainable.

0 thoughts on “The Mysterious Half-Halt”