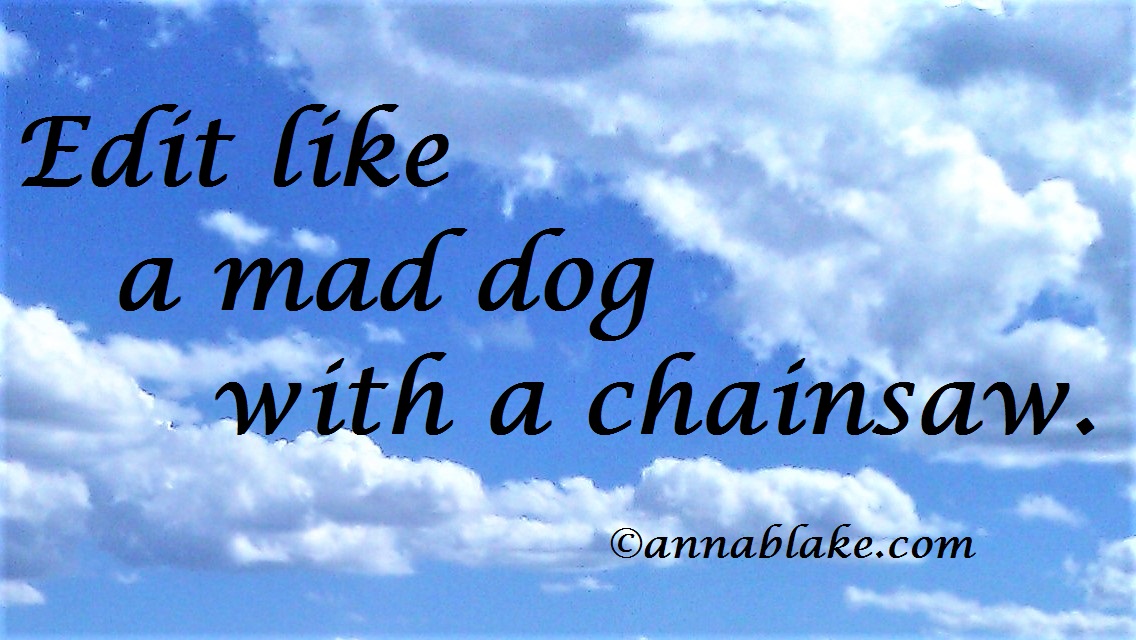 As soon as I escaped, I started writing poems. I was barely eighteen and living four states away from my complicated family. I struggled with depression and love poems were out of my range of experience. I was all teen angst: Walking at night, soaking in self-loathing, and alone in a city. When I did speak, my words cut to the bone with truth and rage. I wasn’t much fun to be around.
Luckily, I’m an introvert, so I wrote it out for hours at a time. My words built a cage for my monsters. In a while, I felt safe enough to sleep through the night with the help of a few good dogs.
Writing is therapy and some of us need it more than others. I was fine with that. Somewhere in the process of distilling an experience into words, I found a bit of sanity for a few hours. And poetry forced me to whittle huge thoughts into mere paragraphs and then dissect to the heart of that.
Poetry is editing in the extreme.
Of course, I knew poetry was as foolish as wearing underwear-hats. Too self-absorbed, too elite, too obscure.
My self-doubt created a literary character who had a habit of publicly reading her embarrassingly lame poetry, to the chagrin of her friends. I bite my tongue for her to this day. The character out-lived that book outline and she’s still here, poking me to write poems while heckling me for being a dolt. Have I mentioned that I think too much?
I attended a book talk given by author Michael Ondaatje a while back. He won the Booker Prize for The English Patient, but has published numerous fiction, non-fiction, and poetry books. His autograph table in the lobby looked like an entire library. When asked about that genre range, he said that prose opened the door to poetry and then, in turn, poetry informed his prose. He continued to answer questions eloquently while my brain stalled, grasping at the idea. What if all my words worked together instead of being contained in separate categories that name-called each other? It seemed obvious in hindsight.
So with absolutely no acknowledgment, for fear someone would notice, I started posting blogs where I edited 800-900 words out. The other word for that is poetry.
[A reminder: This is a series about writing; a map of the paths and stopovers that I made, with writing exercises included. It isn’t that I think I’m an expert or that my book sales have bought me a second home. Or even a second bathroom in this home. I’ve just had such a great time and sharing it serves as a thank you. Friend me on Facebook if you’d like to be part of the online group. We work on the honor system; participate as you like. Writing is common sense; you’ll get about as much out of it as you put in.]
This week: The assignment that never changes… write. Write like the wind, write like thunder, write like the desert. Write because writing improves the quality of ordinary thought and we become more interesting to own ourselves.
There are general guidelines on word count for most genres. Books should be about 80,000 words, give or take. A plot should run tight and hot. Longer manuscripts are frowned on by the book industry. The assumption being it’s badly edited; that it rambles or has superfluous characters. The generally accepted length of a blog is around 600-800 words to rank well in the search engines, and not over 2500 words. Blogs are considered short form writing and should be crafted to stay on topic and hold the reader’s attention. Briefly.
Look at both word count and word choice. If it isn’t important, edit it out. If it’s a good turn of phrase, save it for later writing, but hack away now. Be strict. Be heartless. Train yourself to only use your very best words. Then edit most of those out. Shorten redundant sentences and leave something for the reader to be interested in following. Then remember the only difference between editing a blog and a book is that you relentlessly chop and hack for thousands of words longer.
The best reason to exercise your edit skills is that there’s a secret task up ahead. The very hardest part of writing a book isn’t the first 80,000 words. It ends up that’s the easy part. After that you need a blurb. The damned blurb. You’ll need one that’s 500 words and another at 250 words. Then, almost impossibly, one about 100 words long. Finally, you’ll need the hardest piece of writing in the world: A blurb for the back cover; a precious few life-or-death words to entice a reader to cross the line and read it. My blurbs have taken me weeks and weeks to write and I’m not alone. Start flexing those editing muscles now. I could write a book… The Angst of Reduction.
This week’s assignment is to write long and then write short. Begin a reduction. [Wiki: In cooking, a reduction is the process of thickening and intensifying the flavor of a liquid mixture such as a soup, sauce, wine, or juice by simmering or boiling.] Write a longer piece and then edit it in half. Then boil that down to a sentence or a poem. Twenty words or so.
Then post on the Writing Herd FB page. Share this assignment or your feelings about this assignment, or anything else you’d like. We’re your readers.
So… in this series about writing, I try to give an example of what I mean in each post. Here goes:
I write about life, using horses are a parable. There are three books now, several hundred blogs, and lately, I try to sum it up in even fewer words.