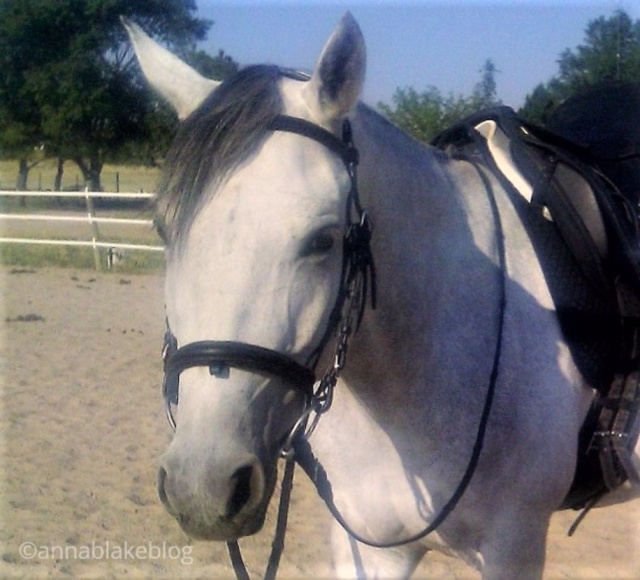 I arrived at the barn mid-fight. The barn manager was refereeing a dust-up between a trainer and a boarder who was not his client. The trainer had tied a horse’s head, snubbed down tight, to its side and left in a stall. The boarder went into the stall and untied the horse. The trainer cried trespassing and the boarder cried cruelty. From over my shoulder, I heard the trainer growl, “Mind your own business!” at the boarder, an unapologetic older woman.

Horses usually like to bend one way better than the other; a soft side and a stiff side. You could think of it kind of like being right-handed, only with horses most are more willing to bend to the left. It means the horse would be weaker on one side which translates to a lack of balance. In other words, the horse is never straight. It’s natural for the horse, but if we want the horse strong and balanced, we work both sides. Ambidextrous is the human version of straight.

I heard an anecdotal reason once, that a horse’s bend preference depends on which direction he was curled in utero. I don’t know if it’s true, but it stuck with me because it reminds me that bend is “natural” and it’s an easy visual to understand.

Bend means a gentle arc from a horse’s nose to his tail. That the inside rib-cage is slightly compressed and the outside rib-cage slightly expanded. Think riding a circle. It’s why one direction is easier than the other.

I have no excuse for this trainer but I know what he thought he was doing. His theory was that tying the horse around means the horse fights with himself, rather than a human. It’s a common misunderstanding, like pulling a horse’s head around to your foot while mounted. They say a rider should work the stiff side twice as much as the soft side, too. Common ideas, but that doesn’t make them right.

The problem is that it gets adversarial quickly. It’s the frustration of egg-shaped circles and wrong leads. We decide the horse is disobedient, so we kick more and pull our inside reins. We drill that stiff side repeatedly, trying to soften it, but our resistance creates even more stiffness. Some of us escalate to a physical fight while others set a hard hand and hold a grudge. And yes, resort to tying his head to his side and leaving. It gets personal.

That’s the disconnect. Remember your mental image of a foal in utero. It’s not disobedience. The horse isn’t resisting you out of defiance. He’s literally stiff. Think of how stiff feels; you would defend a sore shoulder. You’d lose balance and straightness just like they do. Only theirs isn’t an injury or an attitude. They’re born this way. It’s natural.

We kindly want my horse balanced and strong and flexible, but from this standpoint wouldn’t it be smarter to massage them into it and not pick a fight? And lucky us, we have the good use of an inside leg to do it.

Start over with new understanding. Walk a large circle his easy way, probably left. Feel your sit-bones rise and fall with his stride, as your legs lightly follow the sway of his barrel. Begin by taking stock of your rib-cage. Inhale to inflate your lungs. Feel your ribs symmetrical and your shoulders level. If you aren’t sitting straight, your horse can’t balance your weight evenly. As you walk the circle, you have a slight turn to your waist; your right shoulder is slightly back.

Visualize bend like the soft edge of a crescent moon. Bend refers to that sweet outside arc of the horse, so counter-intuitive as it is, forget your inside hand. Drop your eyes for a moment and look at your horse’s withers between your reins. You want to ask your horse to shift his withers toward the outside rein. Think withers. Forget his neck, feel of your inside leg at his girth. Each time his barrel swings to the outside, pulse with your inside calf, gently asking his shoulder to release just a hair at a time. There is no force, just a rhythmic swing. It almost feels like a leg yield out on a circle, but again, that inside leg is relaxed and just cuing once per stride. Slow.

Imagine a line from your inside leg that travels diagonally through the horse to his outside shoulder. Ride that line, ask your horse to step into that outside rein. Your outside rein should work like the rail of the arena, containing and supporting the bend, which you’re remind yourself a million times, refers to the outside arc of the horse, and so, leave the inside rein alone. Foot!

There’s a dressage phrase you might consider tattooing somewhere: Inside foot to outside hand.

Reverse and walk the other way on the circle. Now you are going his stiff way, but his rhythm is still working, so you continue the process. Be slow and quiet. In the beginning, he’ll be stiff and you’ll imagine that your inside leg is like a heating pad, gently warming as you ask his withers to the outside. Your inside leg pulses just as softly, and the response you get is probably less, but that’s fair for a stiff side. If your horse relaxes his neck longer, that’s huge. Just walk and ask, inside leg to outside rein, for bend, but reward him generously for the smallest effort. Massage him soft, and notice that your inside hand is still not pulling. Be patient. If he isn’t soft at the walk, nothing will improve at the trot and the canter will be worse.

From here continue to change direction frequently. Rather than naming the bad side, reverse so often that you can’t remember which side is which. Then, since you aren’t fighting one side, neither is he. Let both bends flow from one to the other walking serpentines and circles until there is no stiff or soft. Feel his balance and fluidity. Feel that same emotional balance in yourself.

Dressage rhymes with massage for a reason.