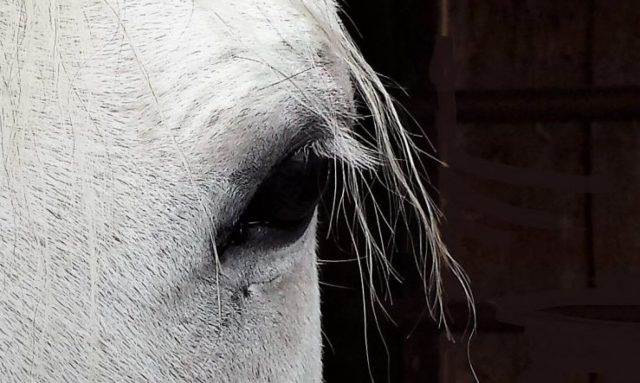 Pause here. Look in his eye. He’s sensitive and intelligent and looking for a partner who’s his equal. If we’re going to agree with scientists that horses are sentient beings, with feelings not unlike our own, when will we start treating them that way?

In riding lessons, I ask math questions a lot. Not real math, of course. It’s more a theoretical sort of math, like “what percent of your horse is forward” or “rate this trot on a scale from one to ten.” It’s short-hand to quantify where we are compared to where we started and where we’d like to be.

The usual way I hear short-hand math talked about in the barn is to quantify leadership. Like most horse things, there is a long continuum of opinion. Some demand their horse submits to 100% human leadership. Equine slavery, I’m thrilled to say, is not tolerated here. It’s easy to deplore. We shake our heads and tsk-tsk our tongues. But 100% cheerful compliance would be great.

We want a partnership with our horses. And once we really agree to that, the confusion and weird math begins. Should it be a 50-50 balance? Does the human get the deciding vote, 51-49? Or because you have a goal with your horse, 60-40? Or maybe you missed the vote entirely and you just go along for the ride, 90-10, to his favor.

Definition of leadership: The ability to provide another sentient the feeling of safety. In this case, a horse.

Humans are extremists. Sometimes, in an attempt to evolve and not dominate horses, we just chatter away kindly. We over-cue, carefully introducing their halter for the millionth time and the horse might even politely sniff it. Maybe he thinks he should because we act like it’s a brand-new thing each time. We chatter about cleaning his feet and might even think he’s listening, when the truth is that it’s the same order of hooves every time. A horse would have to be brain-damaged to not learn that pattern and obligingly pick up his foot.

In other words, we think we’re training things that they know inside-out. It’s like reading a grade school primer in college. Boring at best. Worst is they think we aren’t all that bright. What would it take to teach up to his level?

I think horses kindly recognize human chatter as a calming signal. Meaning it calms us to chatter away. Maybe they assess what percentage of their rider is stressed out and roles reverse.

Definition of chatter: The rattle and bang of constant noise. Legs and seat and hands and voice that just never stop flapping and nicking and correcting. As annoying as flies buzzing, landing, circling, and buzzing some more. It’s the crazy-making babbel that any self-respecting horse would shut out to save his sanity.

About this time, since we don’t want to dominate or chatter away, we decide to listen. No, really listen. We learn their calming signals and their unique detailed preferences. The more we listen, the more they share, affirmed that humans are pulling it together. It’s thrilling to have a corner of understanding that didn’t start in a human brain, but instead is something you learned from a horse. Listening is pure joy.

We listen to our horses so hard, with such focus and patience… that our horses hear crickets. Silence from us. They revert to doubting our intelligence and worry that they are the only sentients in the room. Horses might wonder if, between the scream of domination and the silence of listening, humans are void of the ability to have a simple conversation.

The focus is to shape a response on both sides. You give a cue for walking and pause. He considers the request and walks. You release your cue and breathe normally and follow the flow of his walk. In the beginning, it feels stilted like an Intro to French class. (Bonjour, comment vas-tu? Bon, Merci et vous?) But don’t get impatient and talk over each other.

Any positive training conversation starts with rewarding a good basic response. Behavioral science calls it ‘successive approximation’ implying an approximate answer, not the correct one.

In other words, one of you giving your best hints until the other guesses the right answer, like a game of equine charades. Creativity! A language between two species is born! Hear the theme from 2001: A Space Odyssey? You get it.

How to quantify that kind of leadership conversation? 50-50 feels too flat and dull.

I think it might be an 80-20 percentage, but not static. The idea-and-response flip sides between the human and the horse in an instant. It’s a flash of intention and a spark of response. A cool breeze of release followed by quicksilver inspiration. So fluid that he finishes the thought before you fully articulate it. And his response was lighter and more beautiful than you imagined. It’s a dance that switches leader and follower every few strides.

If a rider complains about a lack of response in their horse, guessing that they only have 20% their horse’s attention, I think a better question might be what percentage of their attention is on their horse? Do we think it’s his job to hang in suspended animation until our next command? Isn’t that how domination works?

Why do humans limit an animal’s response by talking down to them? What if a better name for an unresponsive horse is a bored horse?

The art of communication with horses means evolving a language of successive approximation to a place of happy response on both sides. It takes a quiet and quick listening mind on the part of the human, along the same amount of physical self-awareness that a horse has. That’s the hard part. It would always be easier for a human to dominate or be passive.

Pause here. Look in his eye again. He’s sensitive and intelligent and looking for a partner who’s his equal. The question isn’t if he’ll meet our expectations. It’s what will we need to do meet his.

(Next week: How to be a Brilliant Conversationalist.)

Posted in Calming Signals, Dressage: Relaxed and Forward, The Art of Riding