Pretending to Be a Horse 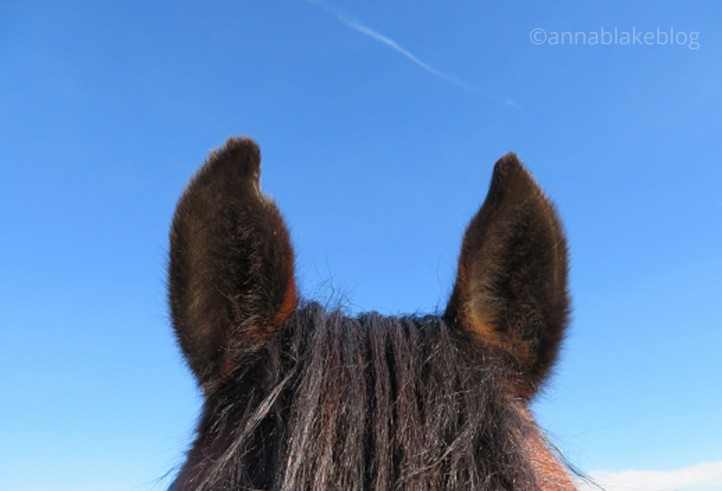 There was a time, while I was in junior high school, that I rode my horse on the road. Lots of us did, living on mostly small acreage, just past the city limit. I rode down to the grade school where we raced sometimes. Or over at the holly farm, up and down the rows. It was almost like a maze.

When I was younger I was fearless because nothing bad had happened. Yet.

There were pastures we’d walk by and if the horses ran up to the fence, my horse got jittery. He’d bounce around on the pavement tossing his head. This might be when I stopped breathing. A hoof would slide out and I’d freeze to a dead pull. The more I wanted him to stand still, the more he was afraid. Or I was, it was hard to tell who started it. I thought if I could keep him from seeing the horses running up, we’d be fine. I kept a tight straight-ahead hold on the reins, and when his neck got stiff, I thought that was good. He couldn’t see them that way.

I don’t consider this a high point in equine understanding.

Now is a good time to state for the record that horse’s range of vision is a large arc covering both flanks, almost a full circle. It’s simpler to state what they can’t see: Directly in front of their forehead and directly behind their tail. In other words, he saw the horses coming toward his side from a great distance. I was the one with bad peripheral vision, but I did have the big shank bit that came with him and an old saddle.

So, that’s when he started bolting.

I was a kid who loved my horse and was scared half to death most of the time. The disagreement had to do with me thinking he should pay attention to me. Just me. And him constantly ignoring me. Sure, his excuse was that he needed awareness of his surroundings, being a prey animal, whether I was on his back or not. He claimed it was a matter of life and death. I thought he should just trust me.

In hindsight, I was being quite mature. Meaning lots of adults think a horse should pay attention to them on general principle. Perhaps because we think we’re the master species. Perhaps because that’s what happens most days when we put the key in the truck ignition. The world is a very logical place, but human logic and horse logic are two very different things. This is the place things start to come apart.

Is your horse distracted?

No. It’s impossible for your horse to be distracted. He lives in the world of his immediate senses. His keen eyesight, his acute hearing ability, and his perceptive sense of smell; each of his senses is unimaginably better than ours.  Humans use intellectual thoughts replace physical awareness. It’s why we get along so well with cell phones but it makes us tenderfoots in the real world. The disconnect doesn’t mean your horse is ignoring you. Your horse is the opposite of distracted. He’s hyper-focused.

Should your horse to totally focus on you?

Not fair to ask. First, as flight animals, they must always be aware of their surroundings. Instinct does tell them it’s life or death. There are brief exceptions, like if you can manage to keep your horse more frightened of you than the natural world through intimidation, then they will focus on you. But not in a good way.

Sometimes when we want a horse to focus, we scare them when we don’t know it. If the desire to hold their attention comes packaged in anxiety, if it comes with fear or anger or any other negative thought, our body screams anxiety directly to the horse, even if our mind thinks it’s giving a different cue. Our core tightens and our legs grab on. We brace our arms and grab the reins and worst of all, it all happens as quickly as a flinch. Our brain might think we gave a halt cue, but our body gave the OMG-we’re-all-gonna-die cue. Your horse picks the loudest cue.

A huge part of the problem we have around horses is a lack of awareness of our own physical reality.  Can you feel what your left hand is doing? Can you tell if your calf muscles are tense? Have your lips pulled into a straight hard-line like your mother’s used to? Has either of you taken a breath lately?

Your focus has switched from your ride to your impending doom.

About now the idea of leadership enters the scene. As the leader, you might feel your horse doesn’t respect your cues. For example, shouldn’t he release to the death grip you have on his rein? (No really, it’s a death grip, you just haven’t noticed.) Your anxiety goes up more, he isn’t listening. Your horse’s anxiety goes up more, it’s metal-on-bone pain. You think you have no control, right before the bolting starts. Your horse thinks he’ll die from your heart-stopping control.

“NO!” isn’t actually a cue your horse can take.

Just stop. I wouldn’t mind if you dismounted right about here. If you’re digging a hole with your horse, at this point, it would be a win to just stop digging. Become aware for a moment, beyond your anxiety. Are you frustrated? Are your feelings hurt, for all the love you have for this horse, that he doesn’t listen to you? Why does he blow you off? The more you ask, the worse he is. Have you taken a breath yet?

He absolutely listened to you.

About now, it dawns on you that it’s true. He did take every lousy cue you gave him. It’s amazing the enlightenment that comes with breathing. Last week, I wrote about a bubble. It’s a safe place for you and your horse where breathing happens with a life-affirming regularity. It’s a place where leadership means safety and peace, where we abide in the present moment. The next series of blogs will be an experiential guide to building a bubble for you and your horse.

Now for the fun part; we’ll build the bubble by pretending to be horses.

0 thoughts on “Pretending to Be a Horse”