Edinburgh, Scotland. The first moments in a new country are never the best. You’ve slept in your clothes, but they aren’t that wrinkled because you’ve sat up in a cramped seat on a plane all night. Since they don’t really give you anything to eat on planes, fewer food stains, I suppose that’s better, but the support hose are choking your ankles. Oh, the romance of travel!

Stop one is the border agent. I usually draw attention because I look like someone who should be retired but I have a work visa. “What is the purpose of your visit?” I tell him I’m a clinician. Quizzical eyebrows. I try to describe the work I do, which probably sounds like anything but work. The agent holds my passport up and looks from the passport to me and back again. “How’s that?” I tell him that groups of riders invite me. That I’m an author.

Why didn’t I say author in the first place? It’s more succinct, I notice, editing the conversation. He’s still looking. “People…?” he pauses to formulate his question and my anxiety level rises. If I have to make a logical explanation for why horse people do anything, I’ll sound crazy for sure.

Then a train to Stonegate, off just before Aberdeen, and a short drive to Lumphanan and the first clinic stop. On a brief spin in the close vicinity, we pulled to the roadside and made our way through some tall growth to find, well, an ancient castle ruin, built in the 1500’s. Just off the road. No fences, no signs. The first of many conversations about history, it’s a common topic here, but my math fails me constantly because we are talking centuries. I can’t fathom the age of history somehow.

I also can’t let go of the feeling that I might be busted for trespassing. I’m informed that Scotland belongs to her people. That they have the Right to Roam by law. And they are a land of trekkers. Long riders and hikers who go overland for days. “Balmoral, too?” Sure, when the Queen isn’t there. Oh, pondering the pride of these people for whom ancient history lives beside this year’s lambs. 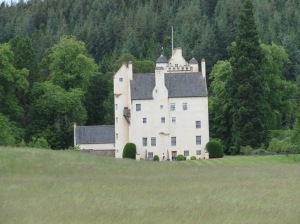 The first workday is a writer’s workshop, on the grounds of another castle. It ends up there are castles everywhere and we meet on the grounds of Aboyne. The original highland games started here, we mimic them in the US.

A small and varied group of writers meets. Some of us are published and some of us are still in school. There is some sharing and I have some tech tips to make this crazy habit a bit easier. We do a writing exercise, sharing our words. It’s a thing so very special to hear another’s unvarnished words, fresh and new. All of us feel vulnerable and I worry that I might be the one most inspired. The participants were amazing. Writing is the art of bringing dimension and reality to ideas and it’s a miracle to witness.

Two riding clinics in this area, at Lumphanan and Insch. There was rain the first day, not that it made a bit of difference to any of us. The second clinic included Rhythm and Dance, a process by which a group of very dissimilar horses end the day in a rousing unified group ride. The horses had the very best time, and that means the riders did, too. Even the cows were envious.

One of the things I love most about doing clinic travel is that I see more of the country than the city. I’m an overly wordy person. Perhaps being a writer encourages it but when it comes to describing the vast wild beauty of this land, I fear I might flounder, stuck in a bog of adjectives. Such a mass of superlatives would not be an overstatement, they would just be too small and frail to be a fair description. Photos of Scotland do not do it justice and my words will do no better. You’ll need to see it for yourself. Sorry.

Coming home from the last day of the clinic, driving on a quiet, narrow road, we come to the unmarked stone where Macbeth is said to have met his end the 15th of August, 1057. History but also the Shakespearian play that changed me as a teenager. And I’m here now, discussing the play with a new friend who has a unique perspective. A stone in a pasture, unstuck in time, history, and literature.

Next stop, Aviemore and the turn off to visit a group of Przewalski’s horses. This day needed a blog of its very own. These ancient horses have so much to teach us. I hope we give them the chance.

On to Lochaline for a ferry to the Isle of Mull and another ferry to the city of Oban. This is the land of the Sea Kings and castles are on rocky outcroppings in a land that’s half sea. Centuries later ferries are a reasonable method of transportation. Oh, just come. I’d bury you in words if I even tried to describe the color of the water.

On to Kilmelford and Tullich farm, where some women have ridden together for more than forty years, quite a history as well. The horses live in a pasture across the road, on tall hills under… well, again, I have no words for ponies like these, on hills like those.

Perhaps half of the riders I’ve worked with here ride Highland ponies or pony crosses of one sort or another. The ponies are steady and smart. Kind horses with huge hooves and wide backs. Why don’t we have more of these in the US? Why don’t I have one in my barn? 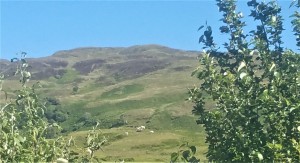 Sometimes after a long day with good horses, there’s a group dinner. This time two tables are pushed together, we are all generations from a wee baby to the 83-year-old farm owner. When asked to address the haggis, she stood to wield her knife over a savory tube of unknown ingredients, while reading “Robby’s poem” in the old Scots dialect. I barely understood a word, but I felt blessed to be included in this group of horsewomen. Honored by the warmth of their kindness. Everyone I’ve met is unfailingly over-kind and I happily spend time writing thank-you notes for their thank-you notes. No, really, thank you. It’s been nothing but a pleasure!

As for the burly restaurant owner who looked me dead in the eye, absolutely knowing my nationality, and twice called me Canadian through a whisker-y grin, I’ll take it as a compliment, as it was intended. Laughing feels good; I usually get questions about America that are harder to answer.

The last leg is a public bus to Glasgow and Edinburgh so I can get a train to England. We travel a road along Loch Lomond, a lake so long and deep that it feeds your soul. It’s a narrow road with constant blind curves, the bus wider than the lane. Cars in the opposite lane cling to the far edge of the pavement with no shoulder to spare.  The bus driver has a microphone; he warns us that we’ll be screaming soon. No screams from me. I’m not breathing enough to articulate a decent yelp.

He speaks in that rich brogue, a rolling burr with a deep trilling of the “r.” It’s not a tourist bus, just the usual public transportation, but this driver is both an everyman and a national treasure. He might be Sean Connery’s younger and wider brother, and even understanding only every fifth word, he is hilarious.

He’s the last person I’d expect a history lesson from but I’m not surprised by now. This one is about a Jacobite uprising in 1745. It feels like yesterday. There are many versions of the story, he says, but after defeat, the Jacobites were jailed and many executed. British victors said one-life-per-family was the fine due, so brothers decided who would return home and the other would be executed. The driver explains, as we are still swerving through traffic, that when a Scot feels a bit melancholy, he might take a sip of the water of life (whiskey) and remember this time.

Oh, my heart. Not the words I thought I knew, I certainly didn’t recognize the name Loch Lomond from the song. And I’m a sap for an accent, still fighting a cold, and nearly drowning from big tourist tears in my eyes.

Then local voices in the bus quietly join his for the chorus, as pure as this ancient lake, “O ye’ll tak’ the high road, and I’ll tak’ the low road, And I’ll be in Scotland a’fore ye, But me and my true love will never meet again, On the bonnie, bonnie banks o’ Loch Lomond.”

Everyone claps and the driver says something apparently both self-deprecating and very funny, but I’m back to not understanding this foreign version of my birth language. Besides, I’m blowing my nose.

If it’s all right, I think I’ll reserve my own personal Right to Roam in Scotland. It’s a place so very genuine and true. I’ll miss the water-scent on the land and the people who proudly own it.

With gratitude to the organizers, riders, and beautiful horses, I hope I’ll be back.