Calming Signals and Preacher Man: Still “Reactive” After All These Years

Bear with me, please. I miss my dogs, one in particular. I’m in Dunedin, and he’s 12,620 km away. It sounds even farther in Newzealandish, doesn’t it? It’s National Pet Day back home, I know he is keeping an eye on the door. The Dude Rancher takes good and kind care of the dogs while I’m away working, but no matter how hard he tries, he doesn’t have that certain something Preacher sees in me. If I tell the truth, there is a look Preacher Man gets that I don’t see in the Dude Rancher either. Probably for the best.

Preacher shows up in my writing; he’s been with me for about five and a half years now. It was always him and me, no one else matters. What do you think, Sandy? Was he a couple of years old when you sent him here, give or take? It’s a guess with rescue dogs and he barked across Texas before he came here. He’s a mid-life member of the long-low-barky-herding club now. He used to move around a lot, but time has passed, we’ve mourned four good dogs in those years. Too many of us have become strays, so Preacher needs to keep a special eye on me. Sure, the Dude Rancher lets him talk to me on the phone, but it isn’t the same.

I’m a horse trainer who always talks about Calming Signals in my clinics. I think it’s simply the biggest leap forward we’ve ever had in building better relationships with horses but the concept named by Turid Rugaas, a dog trainer. Once you start speaking the language of calming signals, it feels like dogs, horses, and every other species use some version of this same language. Preacher is an impresario, with seven octaves of toenails, barkyodels, and calming signals. I listen to all of them.

Lots of dogs bark a bit. No harm. Preach over-barked his welcome in a few places before coming here. It’s how you get a name like his, from loudly pontificating and enjoying the sound of your own voice a bit too much. The trouble is I don’t think he liked it at all. It’s more of a bark compulsion for him. Barkitis. He hates it when he barks but he can’t stop. I promised I wouldn’t mention the trickle-down events that result from a barksalot reality; it’s too much information and it puts him in a bad light. His anxiety makes him do things that he regrets even before they happen. Then he barks to relieve his anxiety which gets set off more guiltbarking. It’s like chasing his tail but it’s all in his head, which is both confusing and crazy-making, so he barks a while longer.

Preacher tries too hard, on guard and proactive toward possible lurking evil, but humans call it being reactive. One more misunderstanding.

When he first came, Preacher ran circles on my lap, excited to be so close, popping buttons off my shirt and barking too hard to, barkbark, breathe, barkbark. When the joy was too much, in 5-8 seconds, he had to leap down, spin a few times and try to jump back up, while mumblebarking on each exhale because if he’s breathing, he’s barking, and that’s the rule. Mumblebarking almost like not barking if you don’t look right at him. And the washer is running, they’re grating the road, and your hearing aids are off.

Preacher Man has recently become a mystery media star. I make videos for my online training group, demonstrating techniques with horses and in each one, he’s just off camera, a master thespian capable of an eloquent range of emotion, all expressed by interpretive barking. It’s not just while filming, the background music of my life is a yapping barkdog,  reminding me he’ll relentlessly protect me from all real or imagined harm, except for bark poisoning.

While working, I try to help people understand what their horses are communicating about stress so they can answer with kind affirmative signals. Some of the horses are young or have had privileged lives, and the conversations are full of curiosity, soft eyes, and relaxed necks. Others are rescues with half-closed eyes, stiff backs, and emotional baggage that make them look as tired as their exhausted feelings. Time is the magic ingredient. Some will eventually find a way back, healing themselves with the relief brought by forgiving themselves, as much as us.

Others lose their way forever, no matter how much we love them. I wonder sometimes if our ever-needful desire to heal them only confirms to them how damaged and broken they are. Do they see themselves through our eyes, an affirmation of their flaws? Do they shut down to our pity? Could our love burn too hot for healing?

For a while, I dreamed that Preacher would sleep deeply and awaken soft and relaxed. That the sight of the broom wouldn’t make him cower. That he could enjoy his dinner in small bites without defense. That he would be able to cock his head sideways and give me a goofy smile. But I gave that up. It felt like I was asking him to become a lounge singer or an electrical engineer or space alien. I let go of needing him to be anything and just listened to his barksong, with a cooling acceptance of him exactly as he is.

It’s been those same five and a half years since I’ve gone to the bathroom by myself. No one with a dog goes to the bathroom alone. But now Preacher doesn’t have to stare out the door, keeping everyone at a distance with a bark at that could chip porcelain. Instead, he follows me into the bathroom like an old man in a stained tee-shirt, punching a time clock at a job he’s no longer enjoys but it’s his duty of habit. Dozing off with his head in the corner, a grouchbark not quite under his breath. 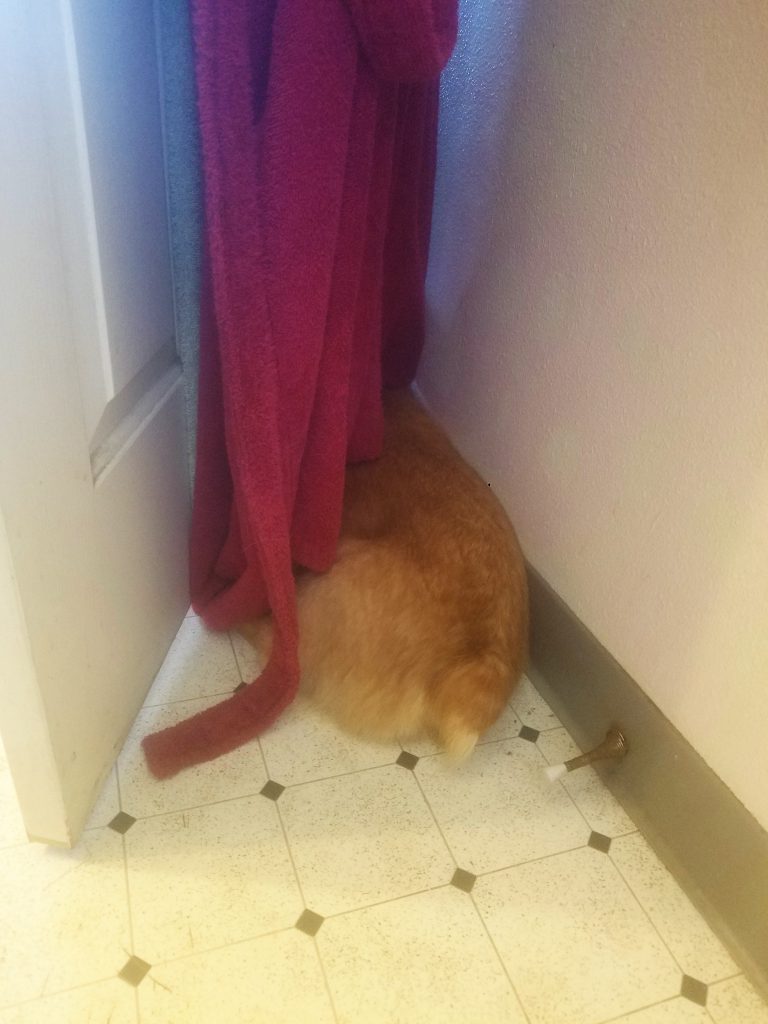 Anna Blake at Infinity Farm
Join us at The Barn, our online training group at annablake.com
Email [email protected] for clinic hosting details or to be added to the email list.

35 thoughts on “Calming Signals and Preacher Man: Still “Reactive” After All These Years”