Calming Signals and the Thing We Call Stubborn 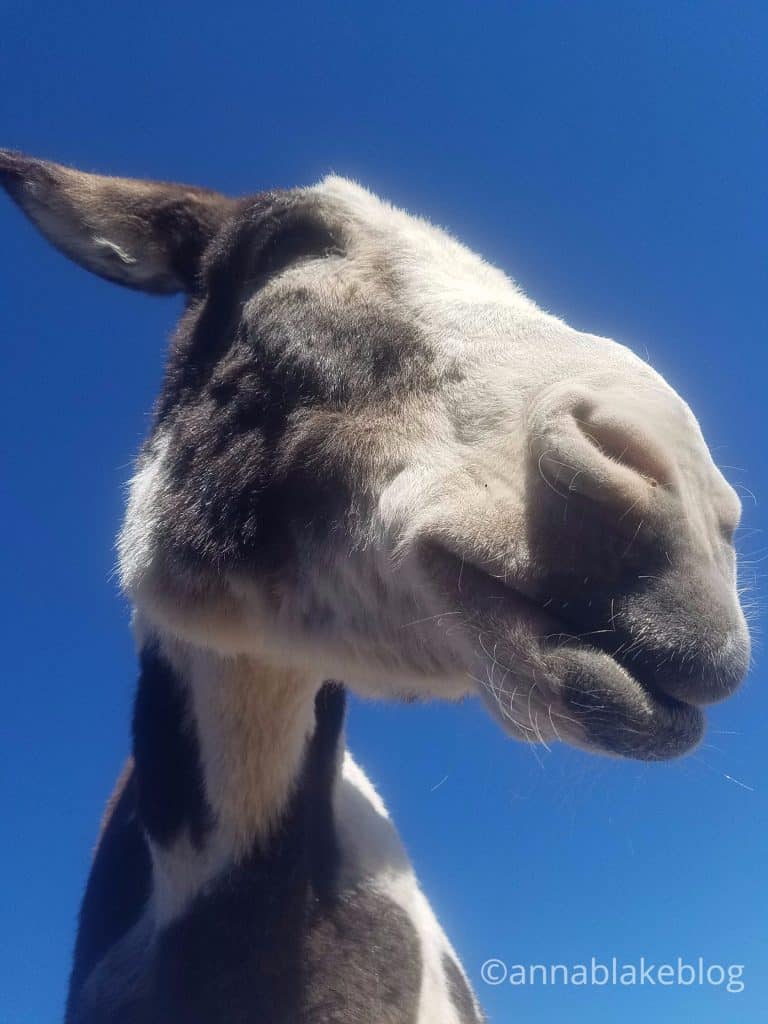 In celebration of Edgar Rice Burro’s birthday, he’s asked me to rant a bit about the thing humans call stubborn. Donkeys call that same behavior common sense. Are you in a hurry to find out what this is about?

Edgar Rice Burro says in good time. He has had it with donkeys being referred to in such a callous, misunderstood way, so he asked that our example here be a horse. It might be a breed like a draft or draft cross, a Fjord or Haflinger type, or even a stoic sort like a Quarter Horse. Ponies are usually at the top of the “stubborn” (common sense) list. Mules, of course, Edgar says, are smarter than horses for the obvious reason.  Bottom line: use any horse who enjoys having time to reason things out. It’s a quality, isn’t it? A horse that doesn’t leap to conclusions, but instead thinks about his options?

There you are, with a thoughtful horse at a first-time obstacle. Let’s pick something people might be a bit afraid of like a plastic wading pool with old rubber hose in it. Does the idea of that obstacle make your eyebrows go up, your breath a bit shallow as you think about it? Good. That means you want it. Add on top that the instructions are that the horse must stop with his hind two feet in.

Now you lead your horse toward the pool and he’s a bit curious. He stretches toward it, maybe stopping a few feet away. You’re smart, so you let your horse approach it one step at a time. And the split second he takes one step, you ask for another. No, you didn’t say thank you. Instead you said more. MORE NOW.

The horse is thinking there is something the human knows that he doesn’t, so he’s on alert. He senses human anxiety, it might be need/ambition/want in our thoughts, but of course, he pauses because of his common sense. His curiosity stops dead in the face of a human’s desire, which reads as anxiety to a horse.

It’s at this point in the example that Edgar Rice Burro wants me to scream a bloody rant. This part really makes his ears hurt, but I explain to him that humans are sensitive about their arrogance and we must stay polite to get the point across. Edgar believes those who are not polite in the first place… well, you know. We compromise on me saying this:

When your internal and external body language are in conflict, any donkey or horse can tell. Like a small sound in the distant trees, it sets off a predator alert.

About now the horse’s hesitation becomes a problem. After all, he was taking steps just before and now he isn’t. Humans read that as a refusal. And the clock, the one horses have no idea exists, continues to tick. The human asks again, with a bit more volume. It might be a habit from a previous kind of training that used the Ask-Tell-Make rule, or it may just be our impatient nature as humans. We’re famous for liking to have our way.

Edgar says RANT! The idea that something contradictory would become clear if it was just yelled louder is so ridiculous, he can’t stand it. As if equine hearing wasn’t twice a human’s at birth. As if a prey animal is even capable of ignoring a predator.

The horse shifts his weight, a small action to see if that’s what the human still wants or if the human’s behavior is about something else entirely. Because it kind of feels that way, but just at the same instant, the human cues again. And then cues one more time…

…as if the horse is a total idiot with a one-second memory. Memory is their equine superpower, remember? Edgar says, “In a polite conversation, one person talks at a time and waits for an answer. We need a moment to think but humans interrupt. Why do you correct us for thinking? 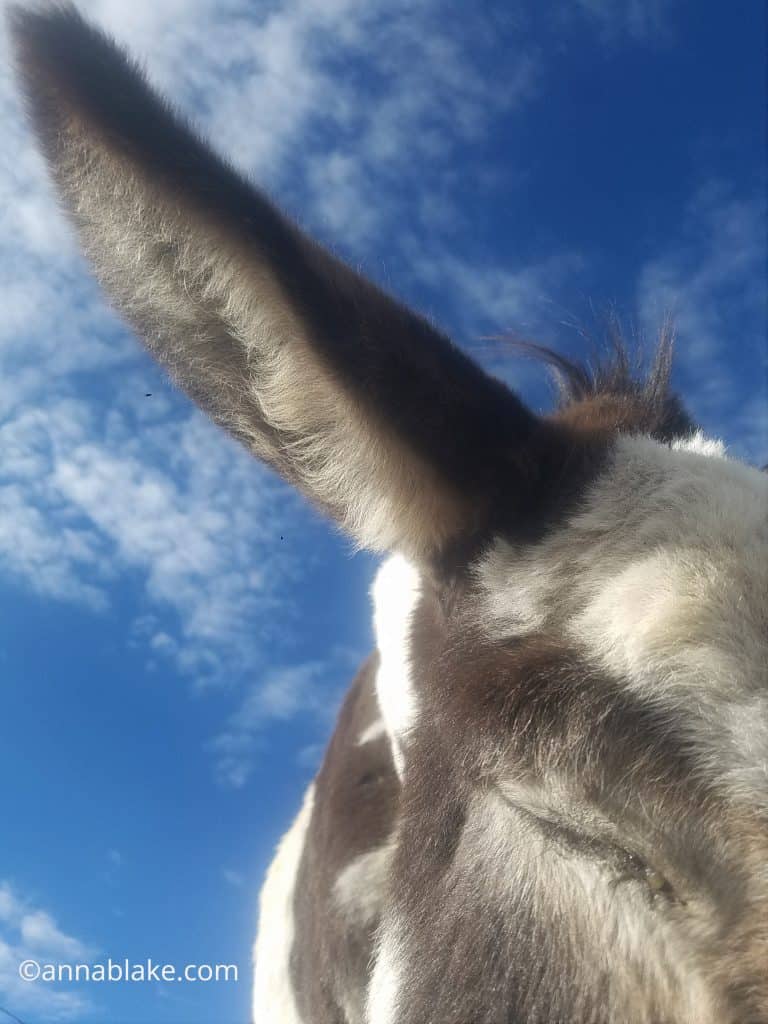 Now more time has passed, not that horses care but humans sure do. And maybe people are watching. Humans always have anxiety around other humans, horses notice. The wading pool innocently looms, it hasn’t changed a bit to the horse’s eye, but the human is swinging ropes and clucking and pulling his face. What started as a bit of curiosity has turned dark and the human is tense. It might be impatience/frustration/desire/anger, but it all reads as dark.

Edgar politely tells me that my making excuses for human rudeness has gotten on his very last nerve. He is taking over now, and I’ve agreed to politely take dictation from him. Edgar says, “Flooding the air with your cues is distracting noise. Aren’t you behaving like a toddler who wants a treat? Now is a good time to ask yourself who the stubborn one really is.”

The human takes a breath and looks up at the sky.

Edgar says, “The more impatient you are, the longer it takes.”

A random idea comes to the human’s mind, was it something written somewhere? Or something she heard?

Edgar says, “Being stubborn is the answer to an adversarial question. No one likes to be forced, not even humans. Can you give us equines time to volunteer instead of always being nagged and hurried?”

Just about now the human takes another breath, but this is one of release.

Edgar says, “What if you use the time waiting for an answer to reflect on the nature of partnership?”

(Okay, I have to chirp in. Anna says, “You’re right. If I hadn’t been such a bull-headed stubborn human, I wouldn’t have the donkey dictation skill I have today. I credit equines who didn’t like being hurried for everything I know. BTW, I have no idea what day Edgar was born so we celebrated it on the Grandfather Horse’s birthday.”)

Edgar says, “What if being stubborn is a calming signal, a physical cue, to you humans that we don’t want to fight?”

Then the human stills her mind, her body comes pure again, breathing and curious to see what her horse will choose to do. She’s ready to say yes to any answer from the horse, so the conversation can continue politely, and exhales in relief the adversity has ended. 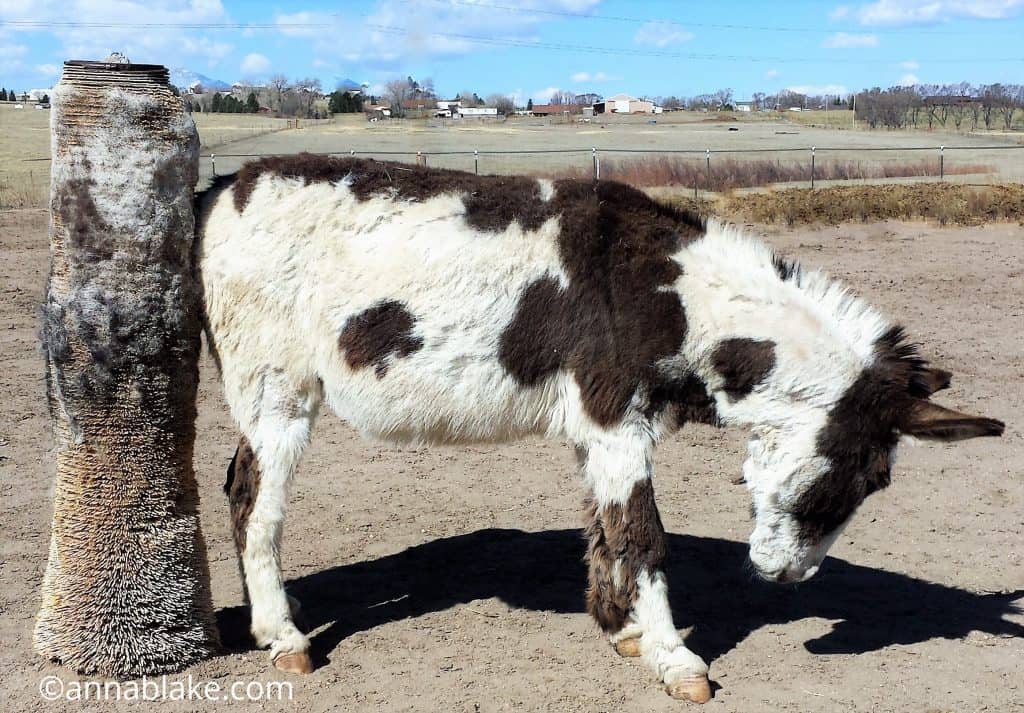 59 thoughts on “Calming Signals and the Thing We Call Stubborn”