Brain Science as a Training Aid 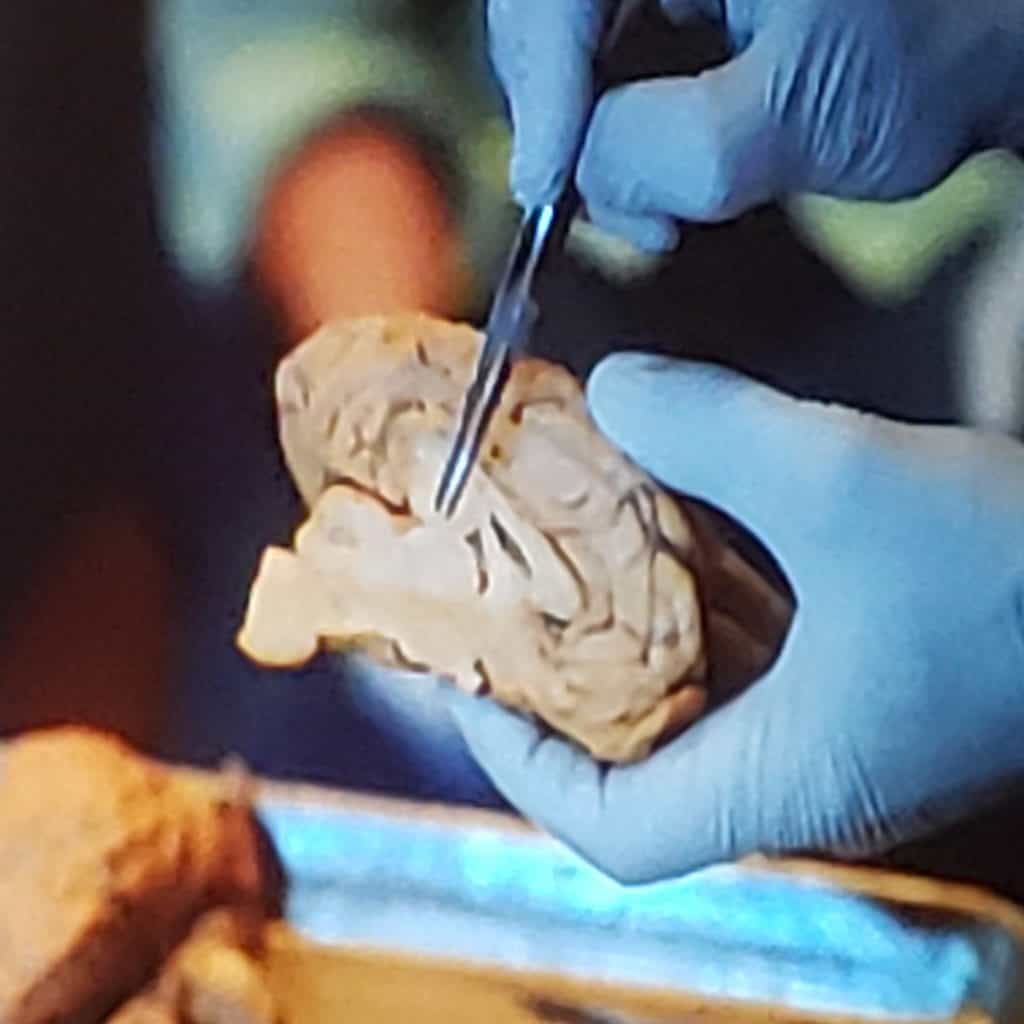 It was a two-day-long science class and we were promised a brain dissection. I signed up immediately and have had the weekend marked off on my calendar for months. I can’t imagine you don’t want to hear all about it.

Our instructor was Dr. Stephen Peters, (Psy.D., ABN, Diplomate in Neuropsychology) a neuroscientist, horse brain researcher, and co-author of the book, Evidence-Based Horsemanship. Mark Rashid and Jim Masterson each gave input over the weekend as well, but in the best possible sense, we were all there to learn. It was a wonderful group of profoundly interested horse people. You could tell because it’s summer and we were inside all day.

We got warmed up Friday night with slides of human brains, both healthy and with dementia. The next morning, we dove into the parts of the equine brain and what they do. The presentation included photos of horses getting CT scans and MRIs, images that made me want to jump up and do a few fist pumps! It’s the basis for The Cambridge Declaration of Consciousness in 2012 when science confirmed what our intuition knew, that our animals have conscious awareness and emotions.

We went on to talk about sympathetic and parasympathetic aspects of the autonomic nervous system, and neurochemicals like dopamine, serotonin, and those misunderstood endorphins. All my favorite words, along with new words like dendrites, the neuropathways built when a horse stays in his parasympathetic state, when given time to be curious and think. Then the resulting dopamine reward, strengthening his self-soothing abilities. That might be the scientific description of confidence. It’s better science compared to a fear-based approach that sends the horse into a flight (or sympathetic) response. Affirming to hear, isn’t it?

Then the amygdala that never forgets trauma, a condition I work with so often in horses. This is the cup that holds all the issues of fear, pain, and survival of the damage from humans thinking they can “desensitize” a nervous system designed to react. In my mind’s eye is the large herd of damaged horses that stays with me; all the client horses I’ve worked with who don’t respond the way we’d like. We don’t have nearly the amount of research we need in the area of brain dysfunction.

Helping horses is part science and part art, but we will never be able to communicate effectively with horses until we understand how they think.

Sunday morning was the dissection. Now is a good time to tell you that in biology class, I was the one hyperventilating with my head between my knees on frog dissection day. I probably would today, too.  Herpetophobia, I’ve never been good with reptiles.

Horses are a different thing and I’ve pushed in at every chance, assisting vets with injuries, surgery, and euthanasia. Over the years, my emotions about blood and guts have had to settle, so I could do the best for the horse. But there was no life in this brain, so my emotions rested easily and let me listen. Gosh, that sounds like I managed to downregulate and stay in my sympathetic nervous system and learn. What does that remind me of?

Some participants were shy about this part, but many were drawn in as I was. Rubber gloves were passed around, as I focused, craning to see as Dr. Steve removed the meninges, the connective tissue covering the brain and spinal cord. It was a darker color and so tough, with no elasticity.

The brain itself is a narrow range of off-white colors. I didn’t expect it to have pastel-colored sections like book diagrams, but I was so struck by its cauliflower-colorlessness, for all the rich and intense activity that had gone on inside. Dr. Steve dissected the brain in half and described each part clearly. The olfactory area is separate from the other senses, that makes sense. By this second explanation of the parts of the brain, the words were more familiar and understandable but at the same time, they became more mysterious. Paper plates were passed with sections of the brain and we were encouraged to touch and hold them.

By the time the cerebellum reached me, many others had held it already. It was cool, no hint of blood or trauma. It was dense and somewhat flexible but not rubbery. There was a wonderful cohesive quality to the material. Holding this small tangerine-sized oval in my cupped hands, I was unprepared for what I felt. My breath shallowed as a huge wave of emotion exploded. Goosebumps, and love for this hunk of “cauliflower” resting in my palm. Humans romanticize about the heart of a horse but for me, it’s always been the horse’s intelligence, his awareness, and how he engages the world. This sacred weight in my hand was the physical home of all that I love about horses, the place where exterior actions become mental reality. It’s the place I want to know most. Holding it, detached and vulnerable, I was gobsmacked to the core, meaning in some off-white “cauliflower” part of me.

Sure, I’m a geek; a horse-crazy girl who spent the weekend scribbling notes instead of filling out my Medicare paperwork. As a professional I need to know this stuff but why should science matter to you?

For the quad-trillionth time, my favorite Xenophon quote from 430 B.C., “For what the horse does under compulsion … is done without understanding and there is no beauty in it either, any more than if one should whip and spur a dancer.”

It’s the confluence of science, Xenophon, and equine calming signals, along with our own intuition, joining to confirm the art of affirmative horse training.

Some of us have been bullied by trainers who think horses are capable of diabolical plans to trick us into letting them win. Or by railbirds who ridicule us for ruining our horses by training “like a girl.” It can wear you down but stand tall.

There is a shift in paradigm happening in understanding and working with animals, and women are on the cutting edge. Lead with confidence because we’re right about this.

Bullies and naysayers, beware. Brain science has our back.

Posted in Abuse/Rescue, horse advocate, Horses/Equestrian, The Art of Riding

61 thoughts on “Brain Science as a Training Aid”