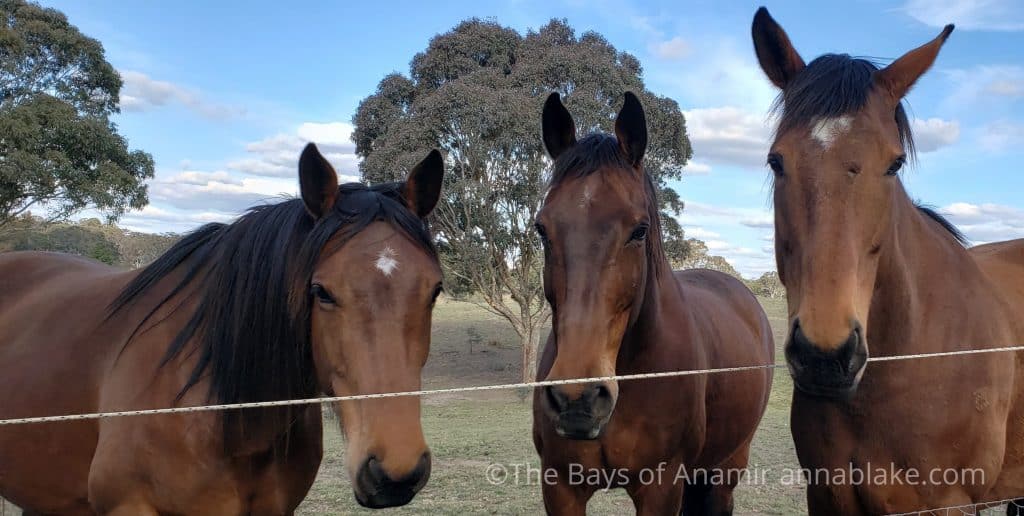 The Barnies are really hitting their stride.

I started an online subscription group earlier this year called The Barn. Soon after someone referred to the members as Barnies and it stuck. The name makes me smile, and in the beginning, there was a free-for-all of good intention. My training approach is very different, the focus on calming signals means there may be unflattering misunderstandings, and I made a bunch of demo videos, most of them with Preacher Man signing back up, where I try to describe things from the horse’s point of view. Because they see things differently.

There were days that Barnies weren’t sure how to stand next to a horse. Most of us are not brand new to horses and this is a fundamental change from how most of us were taught. I said the opposite of things we have always believed to be true. Do humans have an implicit bias about horses?

So… “Arabians are hot,” “ponies are stubborn,” and “chestnut mare are nuts.” Or “You have to show horses who’s boss,” “It’ll ruin him if you let him graze,” and my personal favorite: “Horses release to pressure.” We’ve heard it for so long that it must be right.

Perhaps the craziest thing about implicit bias is that these stereotypical attitudes are frequently not the result of direct personal experience. Much of it is hearsay, passed on by rote, with no foundation of proof. The information should be ranked equally with gossip passed in a junior high school girl’s bathroom, but somehow, if an old-timer says it, or a cowboy, gossip becomes law. For many of us, it doesn’t feel right but we try to go along.

Do horses have a version of implicit bias about humans? Maybe. I’ve known rescue horses afraid of certain kind of hats, horses that pull inside so deep to protect themselves from us that they virtually play dead, and a certain gray mare who drew blood when men came near but carried children as if they were golden. They had a bias about humans that they are convinced is true.

Where does all this talk leave the Barnies? Or anyone else who is willing to have an open mind about age-old habits? On a flight of steps without a handrail. On the cutting edge, sometimes reluctantly, of a different approach where nuance might obscure right and wrong. It involves rethinking old habits, listening with new ears, and taking a leap of faith. It means giving horses, who have lost trust in humans, a chance to reconsider us. It is a mutual rehab.

Start by high grading the knowledge you have. Keep the information that is positive and supportive to the horse and throw out the bits that are based in fear and defensive aggression. It’s important to have a strong foundation of knowledge to help your horse, but then put it in your pocket where it’s handy but doesn’t block your view. Take a breath, put on a smile, and look at the horse in front of you. Be brand new, without expectation. Ask a question but then, let the conversation unfold without cajoling or manipulating his response. Let him find the confidence to figure it out on his own, while you stand around and breathe.

If we want a reliable partnership with a horse, he cannot be trained with fear. We must give the horse autonomy, the confidence to choose while we stay light, actively in the conversation even if we don’t get the answer we want. We refuse to bully or bribe or tease him into compliance. We believe horses will find confidence from autonomy. We find our balance by breathing and we stand in possibility. It starts with an act of faith. We claim independence from our own implicit bias.

Learn to hope you don’t have all the answers. Hope that the horse surprises you. Rather than thinking you can control him, give him the opportunity to exceed your expectations.

It’s like a weird game of chicken. The horse expects you’ll be true to his bias and take the bait (pull reins, correct him, punish him), so he gives you calming signals again, to confirm he is no threat, by looking away or shutting down out of habit. He doesn’t trust you mean it.

We have to resist old habits and out-wait his anxiety; we trust the horse’s intelligence and give him time to sort his mind. It isn’t enough to not take the horse’s bait, confirming his worst opinion of us. We have to prove we are a different kind of human. Even then it isn’t enough to do it once, we have to prove our consistency, sometimes without visual proof it’s working, until that individual-and-unique horse believes we will not betray him and behave like a predator. It takes focus and a suspension of disbelief on both sides. Each side has to stop thinking the worst and each is better for the experience.

Back to the Barnies. It didn’t happen all at once. Some of us got frustrated, some of us tried too hard. Some thought it would never happen for them. We learned to give horses space, physically and especially, mentally. We reframed how we communicated, and we stilled our busy minds. We had to understand pressure means anxiety, even if we think we’re helping. Then change started to take hold and the stories started coming.

That sweet gelding, who had instances of bolting away, had leaned on his Barnie, who thought she was comforting him, but discovered the more she got back from his head, the more confidence he found. Giving him distance improved his balance and each of them felt safer. Leading from behind gave him the confidence to stand on his own.

Another Barnie asked for the rope of a young filly when the seller said the horse wasn’t afraid, just stubborn, and then under the gaze of a doubtful seller, she proceeded to “breathe” her new filly into a trailer, by having faith in thin air.

And then Banjo, a young mule being body clipped at liberty by his Barnie, walked off. Clippers running, his Barnie responding by breathing and giving him a chance. The mule walked a circle, one of the most common calming signals, and returned to finish the clip, improbable to imagine.

We all say horses can tell when we’re sad, that they read our minds. And yet, when it comes to training, we sell their intelligence short and try to dumb them down. Being an affirmative trainer is trusting the horse’s intelligence and given a choice, his desire to volunteer.