Calming Signals: A Vow of Silence 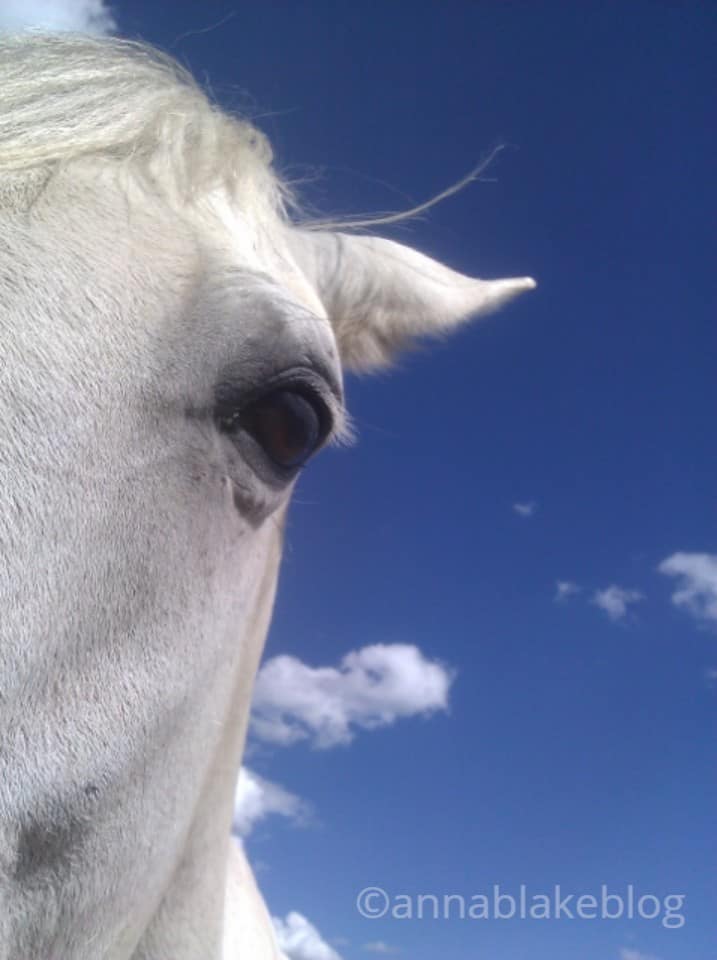 By now you should snort out loud when someone says their horse is ignoring them. Really, is there a more ridiculous thing to imagine? How could it be possible for a prey animal to ignore anything? Their survival depends on being situationally aware in every moment. You can make fun of a horse for staring at a plastic bag he’s seen before, but it’s life and death for him. Nothing less.

If a plastic bag or a reflective mudpuddle can undo him, anything thing a human does, that predator who demands the horse accept everything about them, must be watched. Humans are famous for being complacent and unaware of their surroundings. That’s a luxury a horse may never claim.

So we think horses are flighty or spooky. We see it as a shortcoming for its inconvenience. And horses who are busy being nervous make us nervous. It can turn into a vicious cycle. Pretty soon it doesn’t matter who started the jitters. They are contagious.

Maybe we start to punish the jitters. Drill the horse to stand still. Plant his feet, the only method of survival a horse has. It can look like good training to shut a horse down. It might even work, at least for a while. Now he has natural situational awareness, with fear of his human strapped on top. He might look like a push-button horse and you might think being a bully makes you look cool in front of your timid friends.

Lucky you. You’re the leader now, and your horse has ulcers. Of course, he has ulcers but he will know better than to let you know. Along with a few other ailments that will be his secret because you are a predator who has taken his flight response. Yay. You’ve over-cued your horse into learned helplessness.

Oh, those nasty bullies. Let’s all blame the bullies for any ailment the horse has. Don’t you hate those bullies that shut their horses down?

But we are the good guys. We don’t bully, we just nag. Above all we are kind and compassionate. (And just like everyone who cares about horses, we are on a learning curve.)

Here is what we know for sure. Any cue given repeatedly dulls down the horse. If we kick every stride, the horse gets dull to the aid. Isn’t that a cool phrase, “dull to the aid.” It means that we have blathered on and on, kicking the horse every stride until he has practically lost the will to live. We don’t want to be cruel, so we nag them into a near-paralyzed state. Or maybe the horse just ignores it because it’s become meaningless. There is never a release.

A release tells the horse he’s done the right thing. A release is stopping the aid. Praise is good, breathing is wonderful, but release matters.  And release involves stepping back and being quiet.

Maybe the rider has busy hands. It’s the most natural thing, we are primates after all. We’ve evolved past swinging from trees but we “talk” with our hands, usually without noticing. All that micromanaging, fussing, fearing that a horse can’t take a step without a hand cue, is a bit of an insult, isn’t it? Not to mention, if the cue is in front of the girth, it’s using the brakes.

So now, this proud flight animal has hands in his mouth and human feet on his flank so active they might as well be walking themselves. And a kind, good-intentioned rider chattering away, talking non-stop or singing. Most of us are introverts. We spend time with horses because we don’t lie the rattle and stress of being around humans. I notice.

Despite how much we love our horse, he’s showing signs of stress. He is giving calming signals to let us know he is no threat to us. We keep blathering on, missing the small messages in the general noise of our own making. Soon there is more spooking as his messages go unheeded, or maybe he just spooked once a few weeks ago but it scared us and now we’re hyper-vigilant. We scrutinize the horse for any sign of anxiety, but we have so much anxiety in our scrutiny, that the horse feels we are afraid of something and he should be hyper-vigilant about whatever it is we are afraid of. In other words, now you about both spooky about each other. Like a ball rolling down a hill, humans will escalate. Our nervous system does it without our consent. And the horse is still a flight animal.

The kind rider might have a frustrated bully fantasy. They would never do anything harsh but perhaps look for a new method of training. Or a new training aid that will mean something to a horse. Maybe the girth gets tighter, not that you notice. Your hands get defensive because we’re still primates. Now you are singing non-stop in the saddle, to calm yourself. As if a high-pitched sqeak of a child’s song would calm anyone. You’ll try anything but breathing.

When the stress gets too much for a good horse, or a rider who really is trying her very best, it can feel hopeless. You do not want to pick a fight, but you might not notice how much your behaviors have been a fight with your horse already.

You make an executive decision: this must mean that the horse doesn’t want to be ridden. You think you’re claiming the high moral ground. That you are saving your horse. In truth, you want the stress to stop as much as he does.

What if it’s time to evolve to a different kind of rider, one that doesn’t love horses so much that she can’t see their side. A rider who uses calming signals to respond to her horse instead of more training techniques.

Want to take a challenge? Warning, it sounds easy.

Take a vow of silence. For the same reason others do. Silence gives us the freedom to hear more. Go to your horse and hold your own tongue. No words. Let your breath be eloquent. In the silence, feel your own body. Notice what you are doing by rote. Choose silence again.

Do you feel strangely alone with your horse? Good. Breath and talk about it later. Let nothing distract you from your horse. What do you hear, see, notice? Walk on and feel your horse breathe between your soft, bird-wing calves. Let him move your legs.

Your horse may not believe you at first. That’s fine, you have time to prove to him you are capable of listening. Let the silence rise up and lift both of you to a different footing. Since horses don’t speak as we do, it puts us on level ground with them. Where we can aspire to be his equal.

30 thoughts on “Calming Signals: A Vow of Silence”