Calming Signals: What is a “Hard No?” 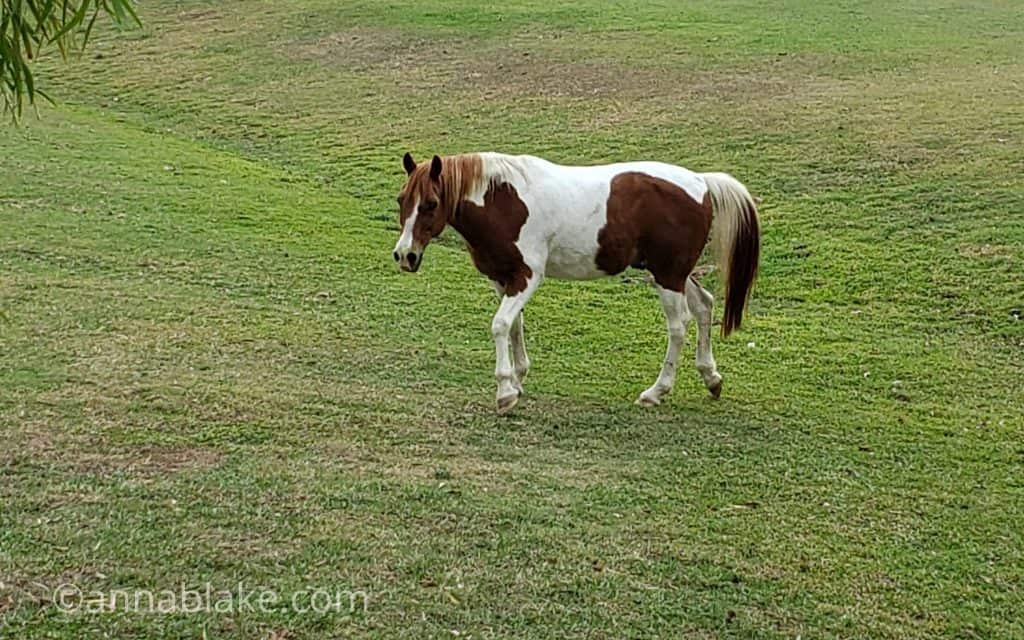 I worry that humans are losing the ability to carry on a polite conversation. I’m talking about civility of the sort we learned in sophomore French class. Sure, it’s a bit canned in the beginning but it had give and take. “How are you?” “I am fine.” Want to know the part of this we are missing with horses? The give and take.

Say you go to the pasture with a halter and walk straight up to a horse. Likely, the horse will walk away. If you breathe for a moment, he’ll probably walk a circle and come back. Did you wait? Most of us don’t have a suspension of disbelief. We think they are gone for good.

Circling or walking in an arc is a calming signal, the way the horse will tell us that they are no threat. We can be less aggressive, and a straight line is coming in a little hot. Would you have gotten a different response if you had walked an arc to greet the horse? Strike one.

Let’s say he comes back and stands with his side to you. Not a coincidence, he can see you now. Then he may have stretched his nose out in curiosity, your smell is your introduction. He isn’t asking you for anything. Did you immediately plant a hand on his face? Would you have done that to Fifi in French class? Strike two and I’m sorry.

Now you move to halter him and he looks away, one of the most common calming signals. Or maybe it didn’t even get this far; you just stood at the gate holding a halter and no one came? Maybe the horse trotted away or tried to hide behind another horse. Is it time to go to the house and knit?

Has the horse given you a hard no? As you ponder the question, take a moment to feel what your body is doing. Change nothing, just notice.

Did you get a no because your horse has a sense of entitlement? It’s a way that we spoil horses, not by over-discipline and constant dominant correction, but by being confusing and inconsistent. In an effort to not bully them, we have allowed them to bully us. Have you played the part of his personal slave without asking him to do his part? Have you allowed boundaries that are inconsistent? You want to hug him and he closes his eyes, a calming signal that you are too close. He’s shutting down, pulling inward but you wish it was him feeling a different human emotion. Soon, he has an anxious muzzle or begins to shove you with his face. You think it’s rude of him, while he’s about had it with you crowding his space. Consider your body again.

Affirmative training doesn’t mean your horse gets to behave like a cranky teenager. It doesn’t mean there are no rules and most of all, it doesn’t mean he lives a lazy, indolent life. Trying to not be dominating monsters, have we gone too far the other way? Have we become servants instead of good partners? Because my idea of partnership isn’t just cleaning up after horses. It’s having an evolved relationship with them, as I clean up after them.

Now is a good time to define what a hard no looks like. I’m at a loss; I’ve never gotten one. I’ve worked with some complicated, angry horses. Usually, that means they are in pain, but a few have been so mishandled that they fall into a behavior almost like learned helplessness. Horses who are so dull from the nagging and interrupting we do, that they give up. It makes us want a whip to get a response, thinking we need a larger cue. They feel they can’t get a word in edgewise, in a non-verbal equine way. Over-reacting or shutting down, those are extremes on the same continuum. We should be trying to find the middle path.

If the horse is in his sympathetic system, he can’t learn. Step one is to let him restore himself. Breathe and wait.

We are slow to learn that horses don’t interrupt. They wait for a lull in the conversation to answer. It’s why we must listen because they won’t speak over us until it’s too late. We can resolve things before they ever get to a hard no if we pay attention.

Get your pass-fail judgment and ego out of it. “Who cares” is your new mantra.  Stop accelerating cues and pushing too hard, your horse heard you the first time. When it all slows down, then there is never a hard no, just equine conversation. Re-adjust the question or cut it into smaller parts. Then, accept a facsimile. Say you ask for his eye, by breathing and looking softly at his eye. Can you tell he’s thinking about it? Good, release. Next try, did he blink or give an ear? Yay. Successive approximation is the right answer.

We need to focus on what we do see, not what we don’t. Focus on try and stop judging.

Horses give us calming signals but only when we build a bridge of silence, can they give their best answer. They don’t talk over us. They pause their answer when we interupt them by upping the cue, accelerating to ask-tell-make. In the silence of not escalating, there is choice.

In affirmative training, we want to evolve the non-verbal conversation, we start slowly to give the horse clarity. But no need to stop there. Horses are smart and what is good training but positive anticipation? When they have clarity, cues get smaller and the response gets quicker. Now riding is like jazz, we improvise. Horses fill in the space, and we give each other solos. We keep the creativity going. Rhythmic and energetic. Now you’re riding a performance horse who loves his job. He has the confidence to reach. Because affirmative training is the way to win competitions, not just a hobby in the pasture. It is equine/human enlightened conversation. Notice your body now?

I keep mentioning your body because I notice we are still scrutinizing the horse and not holding up our end of the conversation.

Are you standing there like a catatonic lump of human meat with squinty eyes thinking about it? Bless your heart, but that weird lurking seems coyote-like to a horse. You make me a little nervous, too.

Consider your body before your horse’s. Take an introspective, somewhat unflattering look at who your horse sees. Are you any fun to be with or are you predictably sullen and moody? Are you the one acting like a cranky teenager? It might be you that needs to work on their calming signals.

Do horses really want to be left alone or do we need to pick up our energy? Do you cue dullness when you mean calm? And what fun is it to be calm all the time anyway?