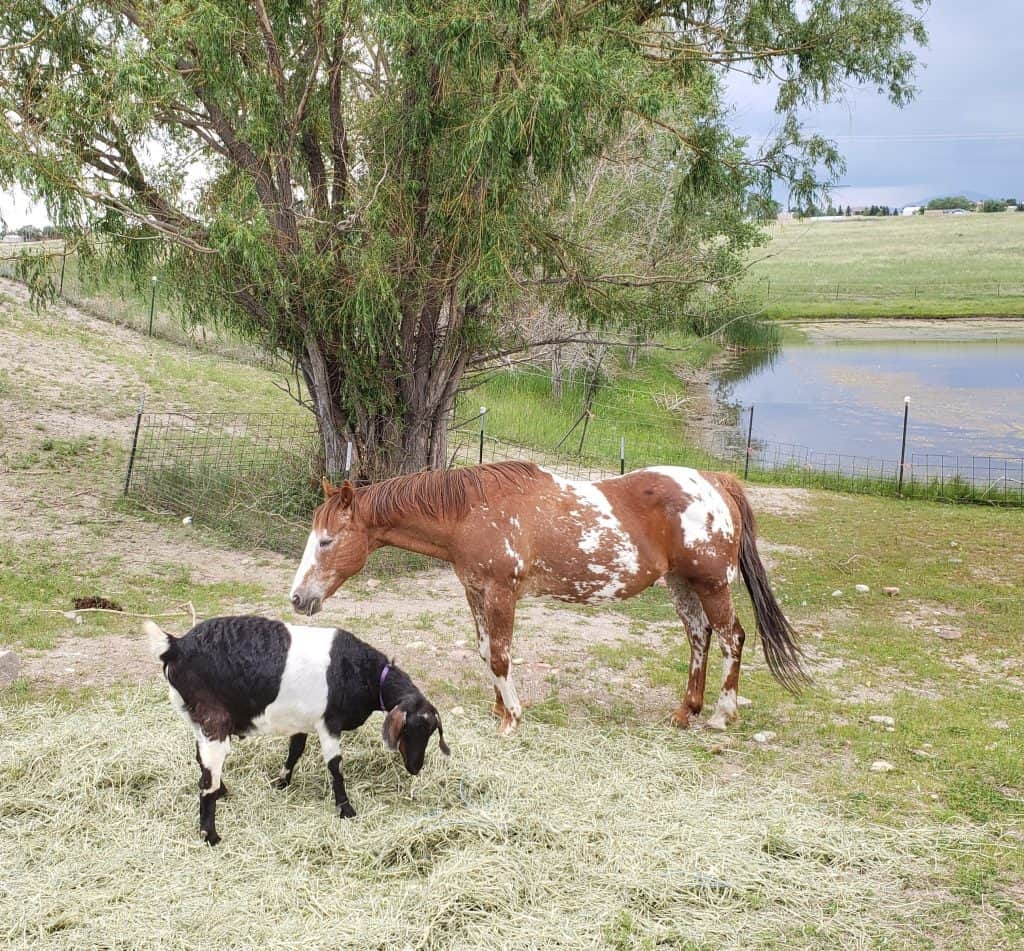 It was a beautiful end-of-summer afternoon, just about feeding time. Cupid had been with us for almost a year by then. He was an elder foster horse having a great summer in that precious way that makes you quiet inside. Cupid never expected much or asked for special treatment. He’d been used hard and not by a little girl, so it took him a while to figure out where he was. He was a good eater, though, even if his body was failing, and he made a friend. Arthur, the goat, had a long history of liking decrepit Appaloosas and took to Cupid right away.

There was a time when Arthur was small and cute and extremely human-avoidant. My other goats came as bottle babies and followed me everywhere. Arthur arrived here at that awkward age when most young male goats get eaten, but not knowing his previous fate, he felt outraged at being kidnapped. With no previous handling, I was happy if he even looked at me. Just when we were making a bit of progress, a different old Appaloosa stood on his leg for a while. It was a serious break, but I managed to hoist him into the trailer and get to the vet, creating the illusion I could walk him on a lead. 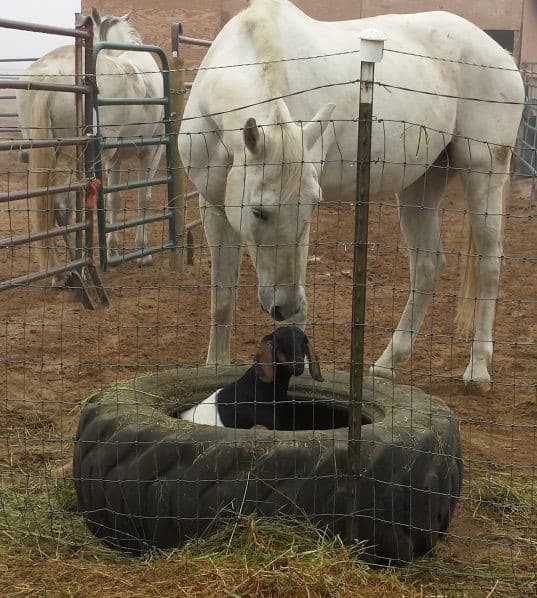 Sure, he only used three legs and was probably in shock, but we walked through the vet clinic only tipping one table over. And his cast was heavy, Arthur was medicated by then, so I managed to get him home, too. He’s grown up now, bigger than our mini horse and obliged to no one. I have a hard-won way of getting him to move next to me. It isn’t pretty but it doesn’t involve a lead rope which is his cue to pull me to the ground.

Just to say, I have tried and mostly failed to train him any sense of fair play, if not polite social behavior, but I swear, if I hadn’t dated a wrestler in high school, I wouldn’t have survived.

That afternoon, I was walking Cupid in for the night, a rope loose around his neck, and we took baby steps so slow we rocked side to side as much as we went forward. If they made elder walkers for horses, I would have gotten him one to ease the way. Instead, we took our time. That’s when it happened. Something exploded between us and we were both knocked apart. Knees buckled. I saw a black and white flash. A cloven hoof managed to plant itself on my lame foot. It wasn’t the first time this goat had upended me but it was so quick that Cupid lost balance, too. I managed to hold just enough tension on the rope that Cupid could keep his footing, only because I was falling in the opposite direction. All of us, not a sound mover in the crowd, fumbling for balance, but Arthur stumbled on in his stiff-legged trot, racing for the bucket of soaked mush he knew I’d hidden under a tub somewhere. We were on the open prairie, for crying out loud, he could have missed us. He didn’t look back. Goats don’t apologize. Cupid and I felt like we were in a Roadrunner cartoon, if Roadrunner was fat, spotted, and moved more like a skid steer.

Even as I was wondering if my knee was sprained, I still believed, as I do now, that every dressage barn should have a goat as a reminder that control is futile.

Cupid was euthanized this fall; the world is less one old Appaloosa who was sweeter and better fed in retirement. Arthur mourned deeply for his friend, which is no surprise at all. They ate and slept and head-butted every day, Cupid the less enthusiastic of the pair. Goats require tolerance from those around them, but Arthur is not without compassion, even if only for himself. He still insists on having things to his liking and at his convenience. Arthur takes what he wants, putting his desires above all questions of safety. No fence can hold him but he won’t leave. He sleeps where he wants and then makes a point of peeing on the hay. It isn’t that Arthur throws a tantrum. He just does what suits him, no need for permission or apologies. 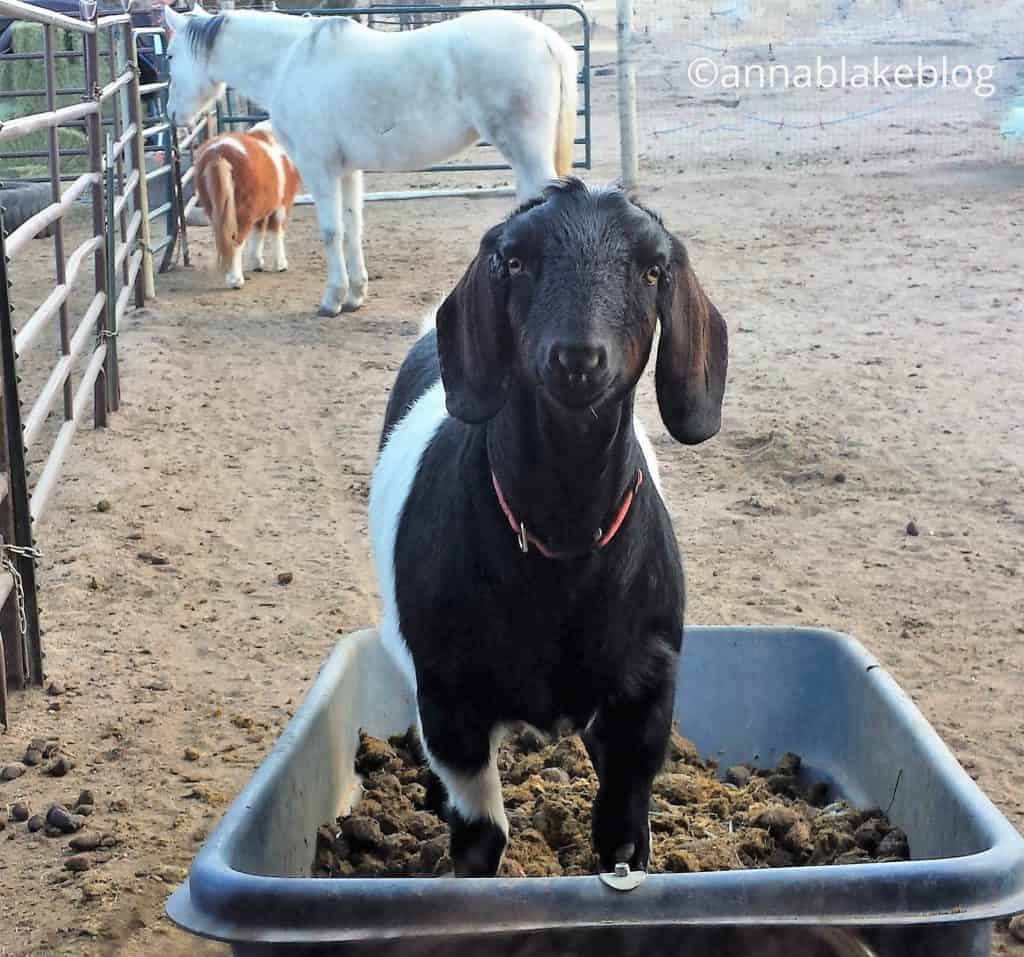 Tell the truth; you envy him just a bit, don’t you?

Some riders ask me about confidence-building but we all wish there was a remedy for being an introvert. How many of us chronically put others before ourselves as a cop-out, down talking our skills, exaggerating all that went wrong first, and then minimizing our success. Humility is one thing but what we do lands closer to self-betrayal. Maybe worst of all, we’re too polite and in the process let our horses down. We’re like Cupid, we hate to rock the boat, we keep our eyes low, and we would never take more than a fraction of our due. The problem is we belittle our value. We don’t want to be seen as arrogant but in that process, we sell ourselves short. We forget it isn’t bragging if it’s a fact.

It isn’t bragging if it’s a fact.

It’s true that Arthur has no advanced degrees. Me, either. You could hire a professional life coach to work things out and it might even be a good idea. And maybe I spend too much time looking for mentors in the barn. What if it’s time to barge your way into your own life, asking for what you want with clarity, taking credit for work well done. Resting in the knowledge that you’re doing a great job at being you.

None of us are in imminent danger of becoming narcissistic ass-hats and even if we were, we’d get over it the next time we saw a horse and fell in love again. I do know this: horses like us to stand tall. They feel most comfortable when we are calm and clear. They don’t care if we’re perfect, they care that we have integrity. That we are true to our intentions.

We should claim what is ours without apology. Smile as we do it our way. Bleat about accepting ourselves just as we are, if we feel the desire. What is confidence but experience, followed by an effort to understand ourselves and do better going forward? 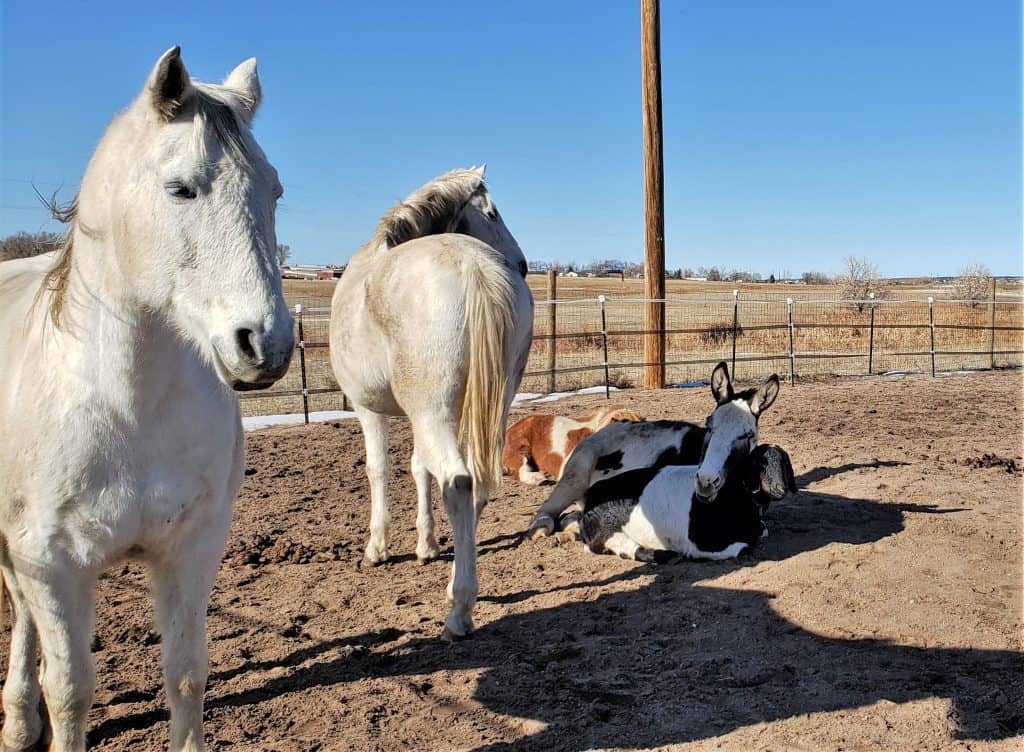 We are all survivors of this chaotic world. We have earned our place here and pride is not the same thing as arrogance. The world would benefit if we were true to what we’ve won through courage and commitment, and then encouraged others to do the same.

Arthur is a full-blown antidote to micromanagement and sedate order. He doesn’t love me and he never will but he does like to have his horn-nubbins scratched sometimes. As he ages, I’m sure that leg will bother him more. If the horses are running, he gets nervous and charges at me. He doesn’t usually manage to stop in time. This feckless goat continues to exist somewhere between audacity, inconvenience, and a bleating how-to manifesto on self-care. I’ll follow his lead.

It isn’t my job to bend him to my will. What if the fight isn’t for dominance but instead, an invitation to autonomy?