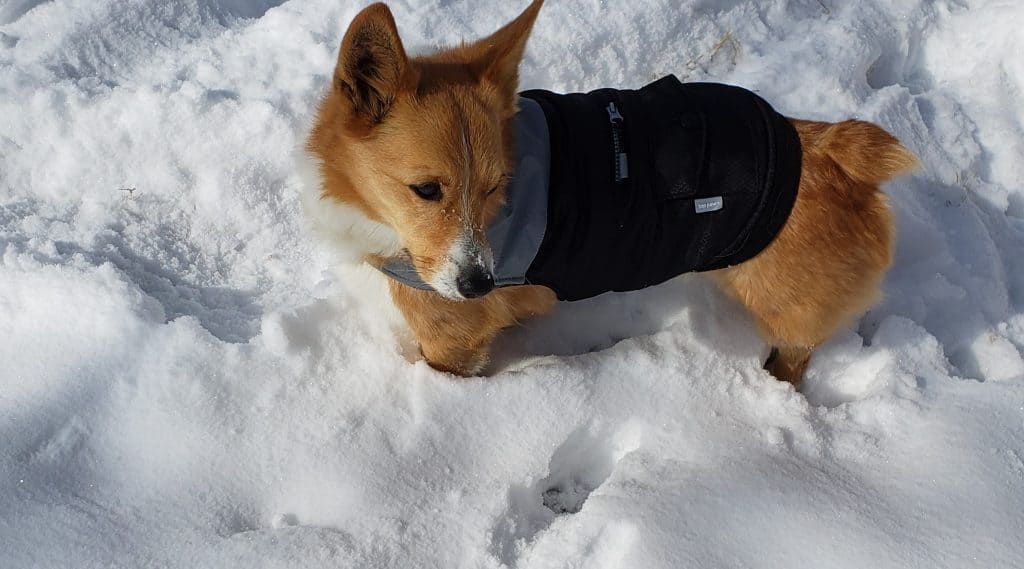 I don’t mind bragging; I’ve slept with some very fine dogs in the course of my long and blessed life. Some say I can’t tell a good dog from a bad one but of course, I can. How else would this have happened? It’s been six years now since my arranged marriage with this little yellow dog. Preacher barked his way across Texas and caught a flight here. We’ve been trying to sleep together ever since. It’s my annual report on the dogs of Infinity Farm.

There aren’t so many of us now. Just three dogs. It’s Preacher Man’s yap-a-versary. He has the soul of a pirate, the athleticism of a flightless bird, and the voice of an operatic tenor having dental work without anesthesia. Barking is his superpower. Preacher appointed himself my Warrior-Guardian and as such, growl-yips at the Dude Rancher each time he comes within ten feet of me. If we are all in the same room Preacher does an impression of every siren he’s ever heard, nonstop without taking a breath. My life is that valuable to him. (His primary calming signals are tense agitation, looking away, licking his nose, the air, and yawning. Correcting any of these is cause for panic peeing, usually inside the house.)

Jack is the newcomer, here three years. He’s a terrier who managed to pass himself off as a Corgi Mix, amazing right there. He lost his adopter to cancer and we inherited him. He’d like you to be clear, he’s not a serial rescue dog but was inherited like a family jewel. He didn’t make a peep when he was fostered here or when he came for stretches while his adopter had hospital stays. He was a saint but now I think he was on his best behavior through all the changes. He finally believes he’s stuck with us and has let down his guard. Seems it’s barking that makes him anxious. He self-soothes by barking back. (His primary calming signals are a frantic wag that uses his whole body. Wrinkling his nose, sometimes one side in a kind of sneer, other times he pulls his lips up above his teeth; that thing we call a dog smiling when it is anything but.)

Then there’s my dear step-dog, Finny. He’s a labradoodle but he got the bad end of the cross. He has a thick Lab body with skinny poodle legs. His mind was never burdened with big thoughts, but now less so. Our best guess is that he’s around fourteen. He walks like an old farrier, his eyes are cloudy, and he has a barely audible sneeze-bark, but he can still steal a loaf of bread off the kitchen counter.  When Finny came he brought the Dude Rancher with him. (His primary calming signals are subtle. He’s stoic but that isn’t the same as being fine. It means he’s as sensitive as the other dogs but knows it’s smart to hide his weaknesses. He dips his head, looks away, keeps his eyes half-closed. He stress eats, but be careful with the judgment on that one.)

Every now and then, it’s good to be reminded that the term Calming Signals was coined by Turid Rugaas in her book, On Talking Terms With Dogs: Calming Signals. For any of us who shared lives with animals, we’d been waiting for this small volume of immense wisdom that gave words to the body-voice we knew intuitively.

Last summer we had some good months. Sometimes the Dude Rancher and I could hold hands in Preacher’s sight. Jack spent the afternoons dozing in the sun with only a small grin on his face. Finny was all stove-up but we discovered some miracle “hemp chews.” Online people were asking me to give a clinic here at my home farm. I said if I did have people come, no one could stay here or even use the inside bathroom. My fragile pack took months to recover from a “visit” from the roofers. One person made it a joke, commenting that she was going to use that excuse so she didn’t have to clean her house for company.  Arguably funny and said with no bad intent. How is it that I can maintain a sense of humor with a dog who’s been peeing in the house (in somewhat designated areas) for six years but get all wound-up over this joke? (Seems I have calming signals, too. I get quiet, cover my eyes, bite my tongue and hold all that anxiety until I pant, rant, cry, or scream. Usually all at once, I learned it from Preacher, who would have us know they are all ways of breathing.)

The thing about change is that it’s dependable. Nothing stays good or bad forever. Our lives are built with dominoes. The recent topple was Squirrel, the ancient tabby who was tiny and boney and mainly slept all day, but her passing shook our foundations. Then the other cats had to debate politics all over again. Finny got confused. He pretends to ignore the cats, but somehow losing her made his limp worse. Now, he stares too long and gets lost in the back yard. He forgot where he sleeps and moved into my tiny studio with two other very concerned dogs. It’s their territory; they just let me write there. So they glare at Finny and over-bark which confuses him a little more. He asks us to open doors for him and a second later, asks again. Finn pushes his gray snout into my leg and wags the very tip-end of his tail. Change is impartial: It’s as if he has two paws in this world and two somewhere else. Has there ever been, or will there ever be, anything as precious as a limping, half-blind elderly dog who is always underfoot and in the way? 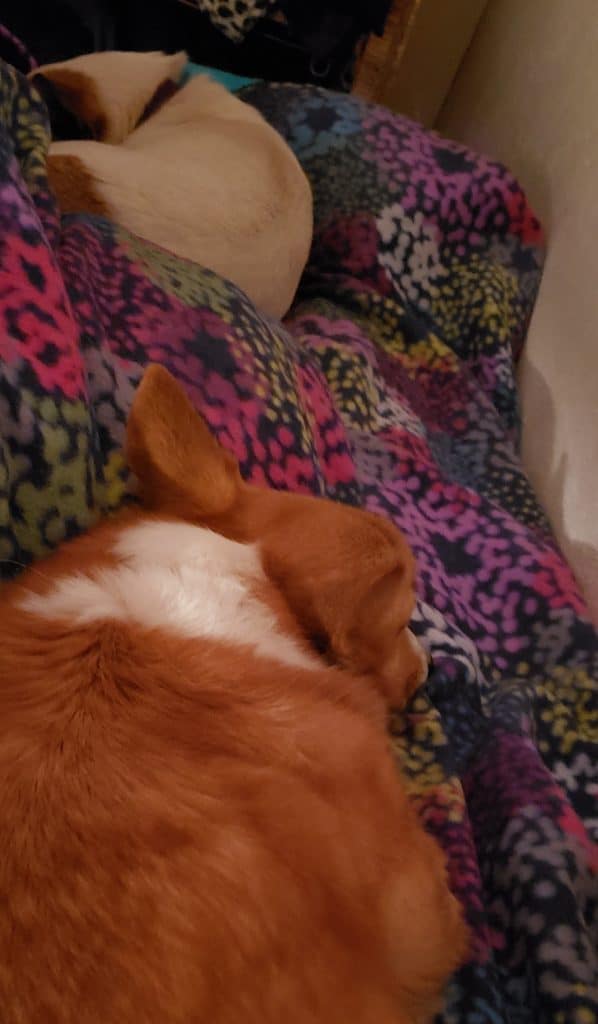 It’s snowing as I head outside for the late-night barn check, Preacher leaves his bed and waits at the door. I bundle up and tuck my chin against howling prairie winds. You can tell it’s spring because the snow is blowing in all directions at once but I can see a crescent moon. While I check the horses, Preacher stays in the yard. He likes a poop-snack before bed.

Like I said, we’re working out this sleeping together thing. Preacher is a worrier; too much anxiety to be so close, too much fear to go out of sight. The first few years, Preacher slept under the bed and darted out like a snapping turtle when needed. Then for years, he got off the bed as soon as I coaxed him up. Finally, a boudoir photo.  Now a few mornings a week he’s still sleeping when I wake up at 4 am. Seems I’m a restless sleeper by human standards, but sleeping in a dogpile is a calming signal for me. Finny is already awake wondering if it’s breakfast yet. Jack tries to get under the covers one last time. Preacher is am-bark-tious, greeting the pre-dawn sky doing scales to warm his vocal cords.

The truth is that we’re all inconvenient creatures. Calming signals take the blame out of behaviors. That’s what Preacher and the dogs like; they aren’t wrong for being who they are. Labels of good and bad lose importance because in the big picture, we’re all just breathing here together for a little while.

35 thoughts on “Calming Signals: Sleeping with a Reactive Dog”