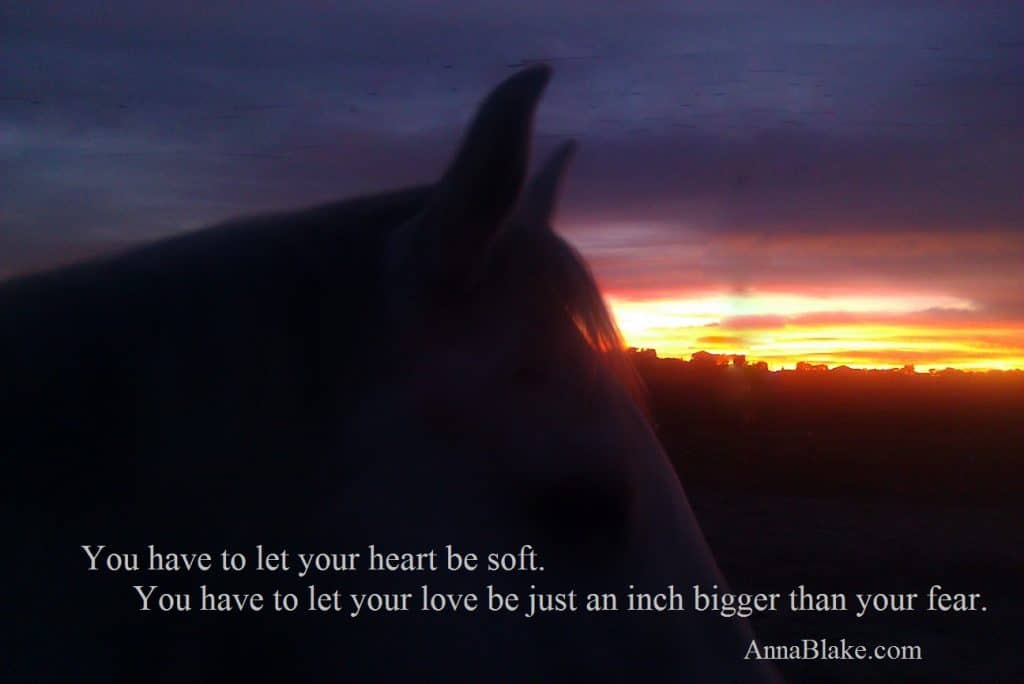 Not long after I moved to the farm, a friend brought her two young kids out. We all walked the pens, petting and learning the names of llamas and goats. Were both boys younger than four? I saddled up my safest horse and climbed on. The horse was tall, and it was a hoist as my friend lifted the younger boy up in front of me. He squealed with glee, half clapping and half patting my horse with his fingers splayed wide. We walked for a few moments with him perched on the front of my dressage saddle. His small body rocked between my arms with each stride as I asked him questions. The boy’s answers were slow in returning. I figured he was talking to my horse, so I fell silent. Maybe we lost time, but the older boy got impatient, fair enough, and soon, his mom said a mom-thing about taking turns and it was time to get down.

My horse came to a stop and the little boy in front of me became stiff, his toes pointed out, his arms clenched to his sides. There was a pause, I couldn’t see his face but then the tears started. He gasped air in and howled loud screaming cries. Wondering if it would spook my horse, I still had to smile. We negotiated to go for one more lap, the boy sobbed the whole way. As his mom lifted him down, his little fingers clenched into fists filled with mane hair. More tears and he still didn’t let go. It was the best thank you ever.

The boy’s mom apologized, but I’ve always considered it good manners to cry if you’re grounded.

The boy has become a young man, starting life on his own. I don’t think he’s ridden since that day, but he’d feel a fear riding now that he didn’t before. He might flash bravado or he might laugh it off.  He’s also old enough to hide his feelings, but his legs would be tense, his hands would grab. He might not expect it, but it isn’t up to him. Fear is an involuntary reaction in our nervous system. Fear is our flight response.

Talk is cheap watching someone ride but things change when your own feet lose the ground. From the saddle, it’s obvious that horses aren’t controllable. That old campaigner may be more dependable than a green-broke youngster, but neither is bombproof.  In explaining how they came off their dependable horse, riders start by explaining that their horse did something he’d never done before. Horses are always doing something they have never done before. The environment is always changing. Horses are flight animals; domestication doesn’t change that.

Then, if that isn’t enough, we feel ashamed of our fears. We try to hide them by acting tough and being a bully. By shutting down and avoiding the subject. By name-calling ourselves for being weak or old or inept. As if beating ourselves up would ever make us strong. As if self-loathing would ever heal the problem. We try to distance ourselves from our nature, we make fun of ourselves because laughter is a human calming signal, a release of anxiety. We wouldn’t laugh along if we didn’t know the feeling. Some of us learn to like fear; the thrill of our heart racing during horror movies and the feeling of our stomachs flipping on a roller coaster. We even learn to like the dread looking ahead to the experience.

So, to recap, a thousand-pound flight animal ridden by another animal, also with a flight response. Nervous system to nervous system, both prone to spooking. Except we know it’s just a movie and the rollercoaster has a small sofa with a safety bar. Horses are real and they don’t have an ignition.

People are relieved to hear about someone else’s fear, citing the other person’s great honesty for admitting it. No matter how many fear stories we hear, we still think our own fear is a personal issue. Bluntness be praised; there is nothing unique about feeling fear. It’s the human condition. Fear is an involuntary response, as natural as flinching before a fall. It isn’t a character flaw, it’s part of our physical design. I hope that comes across as comforting and not fatalistic because fear is an early warning system. It’s a wake-up call for our common sense; fear gets our attention, and then gives us a choice. Shouldn’t we say thank you?

Some trainers yell at riders to not be afraid. Sometimes we yell at ourselves but it’s a cue a rider might take as easily as willing themselves to be somewhere else. Evasions don’t work. The more we try to ignore fear, the more it clings to us. We put a stoic face on. We throat breathe, afraid for others to see our weakness. Does that behavior sound familiar? Acting like a rescue horse isn’t limited either, is it?

What makes humans’ responses to fear different from horses’ is that people can process that fear, work it around in our frontal lobe, and deal with it in different ways. It isn’t that your riding heroes or equine professionals don’t feel fear; perhaps they respect it and find a way to include it in their process. What if you made friends with fear? Would it be a relief to just admit it? Meaning your heart rate comes down, your breathing goes deeper, goosebumps are relaxing. Relief is palpable and that feels good. Less time on the mental rat wheel and more time in the moment, where horses live.

Affirmative training listens to horse emotions and resolves anxiety when it is first realized. We don’t avoid the scary stuff, but we also don’t flood horses with it. We take a tiny corner and deal with that small piece. Success, and we chip off another piece, just big enough to hold. Release is the reward. Soon, the horse’s safe place is larger as confidence is built on the dust of his fears. Trust can find balance but he has to make a choice to stop worshipping fear. He needs help from us. He will become a safer horse when we become less fearful. It seems the term Affirmative training refers to people even more than horses. Inconceivably, common sense speaks up, some gibberish about fear looking like opportunity. We are not foolish; common sense is a leap of faith in the beginning; an affirmation we want to be true. So we switch churches; now we worship common sense. We still have no control, but at least we’re dancing instead of cowering.

Fear has power as long as it can hide in a shadow, as long as we can cover it with shame. Fear is a jealous lover, kidnapping us from our dreams, feeding on our stagnation until we no longer recognize our lives. It can feel overwhelming but a reminder: We have a real problem. We love horses.

Most of us are self-quarantined due to the Covid19 pandemic. Some of us are separated from our horses, while others are home with theirs but using common sense about not riding while our medical systems are stretched helping those in dire need. Let common sense and compassion rule. Please stay safe for you and for your horses.

Want more? Join us at The Barn, our online training group with video sharing, audio blogs, live chats with Anna, and so much more. Or go to annablake.com to schedule a live consultation or lesson, subscribe for email delivery of this blog, see the Clinic Schedule or ask a question about the art and science of working with horses.

23 thoughts on “Horses and Common Sense.”