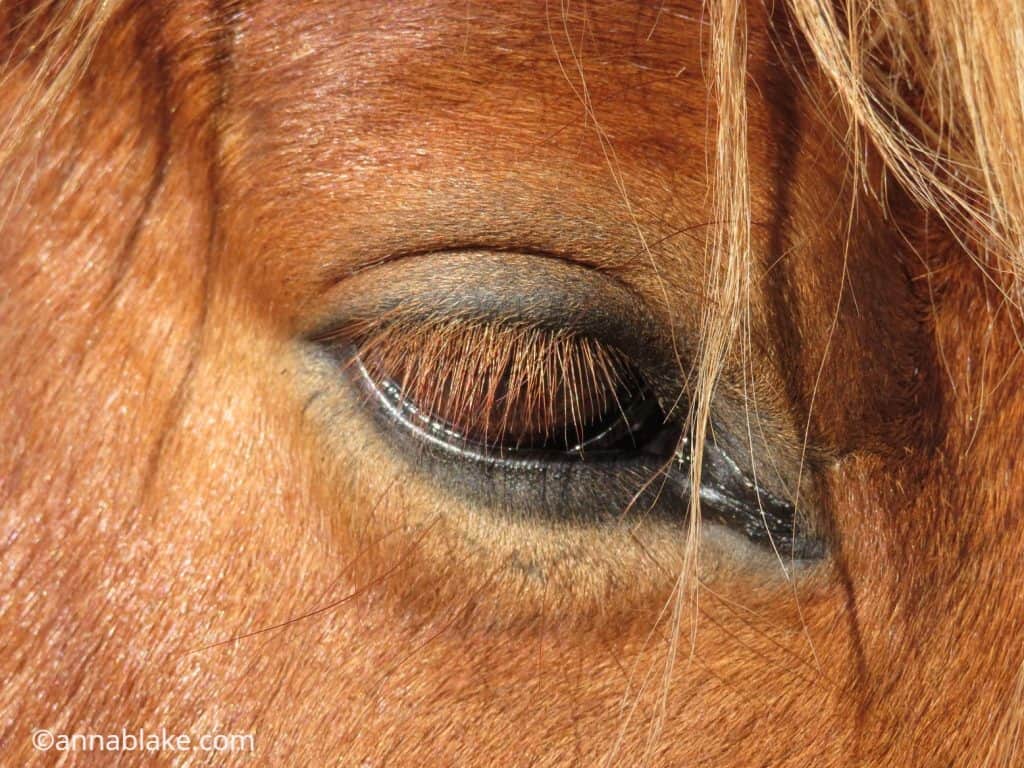 Andante’s nickering. I’ve pulled the hay out of his run and swept the mats. He has a baritone voice, a make-out music, bad boy nicker. He drops a hip, under his breath, “Hay, b-baby.” No, he can’t have any for a while. I’d rather have a knife to my neck than see a horse with no hay in front of him, but in this case, I don’t feel a drop of guilt. Until he gives me something, he’ll have to wait. Grumbling for dinner is a happy chat compared to his moaning four hours ago.

I noticed him out of the corner of my eye this morning lying down in an odd place. A couple of hours later, I saw him yawning but he ate well all day. Nothing seemed wrong, but still, not quite right. The day before I’d taken a second lingering look at another gelding. Might be getting paranoid. Spring weather is a barometric free-for-all in Colorado. Blue sky but then minutes later, purple clouds, blustering wind, and lightning. Short sleeves one moment and hail the next. Add a twelve-hundred-pound horse with a delicate digestive system and anything could happen.

Andante is a Belgian-TB cross who hooked his owner when he was not quite a yearling. I guess you could say he was imported, arriving in a semi load of snotty “byproducts” from a PMU farm in Canada. They have boarded at my farm for almost twelve years now. No, he isn’t my horse. I just act like he is.

I do the afternoon chores, load up hay bags, soak alfalfa pellets. The mare gets her mush first, with her donkey and goat. Then the geldings tumble through the gate. Today, only two came in. I look and Andante is laying down. So unusual. After I coax him a moment, he gets up and walks just ahead of me into his run. I watch him take some hay, but the first glance out my window a few moments later and he’s down flat.

Each horse shows pain differently. Andante is the quiet type. He bends his hocks, folds his body, and sinks down with a thud. His head drops to the ground and his mouth opens just enough to see his bottom teeth. His flank is tight, and he moans. Fair enough, good boy. I call his owner and then the vet. Then a second vet, lucky that time. Meanwhile, Leslie called her mother to come watch her kids and she heads out. Now I wait. Andante is clear. He hurts. He knows I know.

Andante got up and down four more times, pawing in between but not thrashing on the ground. Just lying flat, much too still. He sometimes kicked hard at his belly. Good boy, I remind him. When Leslie arrived, he lifted his head bright with recognition, and then rested it down again. The kind of acknowledgment that sticks in your throat. I give her the timeline as she watches him, taking it all in.

Then she asks the question. It’s as much to herself as me. “Is he a surgery candidate?” We should all have an answer to that question ready before we need it. Details will vary, but with colic, a plan matters. Colic. The word chokes me silent. In hindsight, it might be called mild but, in the beginning, none of them are. This is serious. His health is good, he’s in wonderful condition. He’s bracing his torso, showing us every spasm of pain. We humans remain stoic. We put him above our fear and dread. It’s the one thing in our control. Staying calm lets him know he’s safe. Whichever way this goes, that’s our priority.

The vet arrives, and this part hasn’t really changed over the years I’ve known horses. Banamine for the pain, a rectal exam, a tube up his nose, and a bucket of “bathwater-warm” water. Andante is 17.2 hands. He doesn’t like strangers with needles. He also understands we’re trying to help. It isn’t an easy process and it takes the three of us asking small things. Then we wait again. Nobody makes that dramatic statement from every horse movie we’ve ever seen, “It’s up to him now,” but I tell Leslie that I don’t think today is the day. As he gets a bit more conscious, his flank stays soft. This part can be nerve-wracking. Will he need more meds? Will it resolve or get worse? And then, trumpets from heaven, a tiny fart. A few moments later, an honest fart. The vet suggests a brief trot. Andante and Leslie, both a little lighter on their feet, head to the arena, and he is happy to move. It is too soon to call the event over, so the vet leaves me armed with emergency meds for the night, just in case, and drives away.

His herd mates in the next pen yawn and lick. They’ve been watching and breathing with Andante. Releasing and blowing, there are no secrets in a herd. None of this has escaped the mare, two pens away and concerned every moment. Leslie stays to carry out the vet orders that she trot him five minutes an hour, for two more hours. It’s blog night, I come in to start writing. At ten p.m., I back out to check. Leslie was invisible tucked in the shadow of hay bales, her voice so tiny I can’t place her. We wonder about horses for the millionth time. There was an almost-full moon in the prairie sky, they call this month the Strawberry Moon and it’s a particularly sweet light. It was safe enough now to exhale our poison thoughts. It isn’t the first time she and I have stood this way, a line of defense for this good horse. As we have in the past, the day will come that we stand for him again, and we both feel dark nostalgia and tainted premonition. He has confirmed our greatest fear. He is mortal.

We all go to lunge, she gives him line as he trots around her. Happy to move, he tosses in a canter, flipping his mane for good measure. The ordinary magic of a horse in the moonlight and my ribs had to give way again for a small internal explosion; for this gallant horse who has grown past all expectation and the woman who has matched his stride. Bringing him back to his run, he nickered again, that totally irresistible voice that we will resist. He pushes at his gate. Rather than tease him, Leslie and I go our separate ways. I check him at midnight, and again at three a.m. He was laying on his elbow, ears up, resting. The Banamine would be nearly gone. Good signs but I assume nothing. Up at dawn, his pen vacuumed of all stray leaves of hay… and gift of horse gods, one small but glorious pile of manure. I doled out three insignificant handfuls of hay. He muttered at the stingy serving, not grateful in the least.

Andante is soaking in the morning sun, while we flounder between knowing the past and the future, profoundly blessed for this day, this horse, and all horses, at once dynamically powerful and ridiculously fragile. 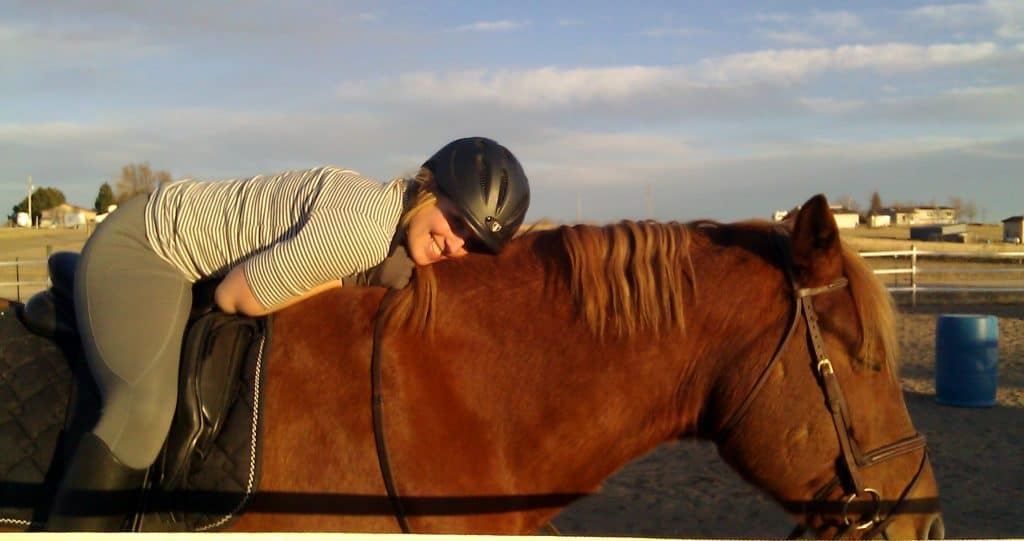 Want more? Visit annablake.com to see our class schedule, online courses available on a revolving basis on Calming Signals, Affirmative Training, and More. You can book a live consultation or lesson, subscribe for email delivery of this blog, or ask a question about the art and science of working with horses. Join us in The Barn, our online training group with video sharing, audio blogs, live chats with Anna, and so much more.

41 thoughts on “Long Dark Night of the Soul: Colic”