A Funny Thing Happened During the Euthanasia. 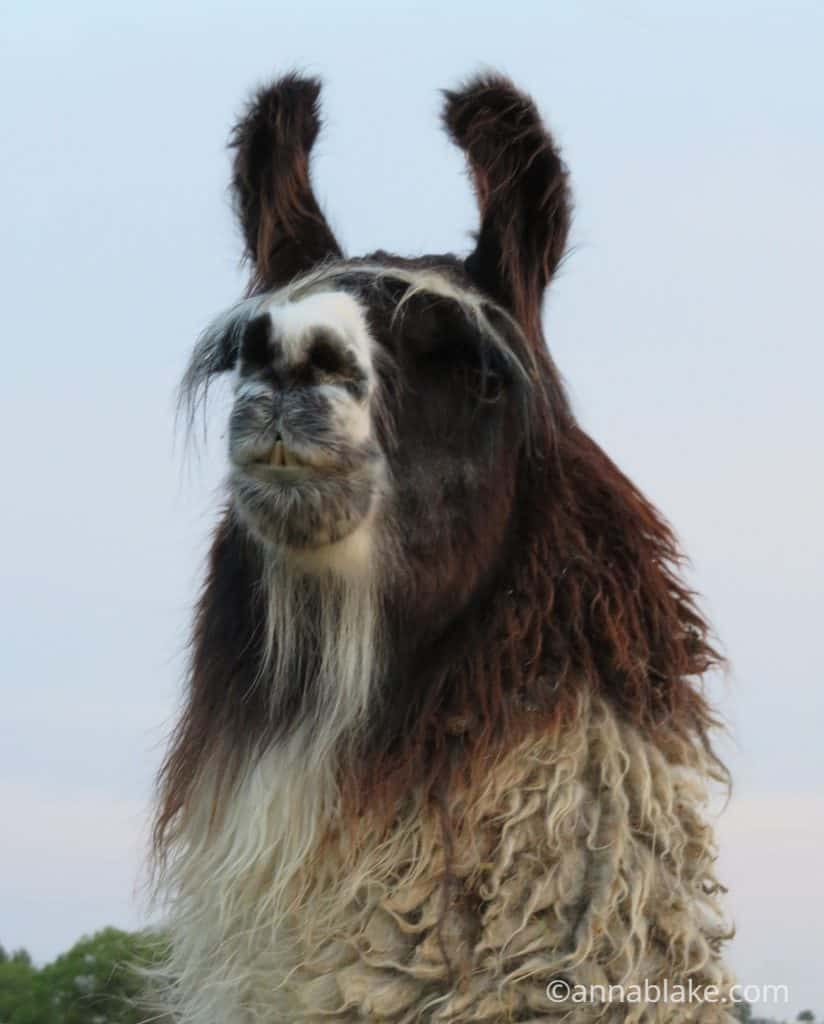 We’ve been having llama line dances here for over twenty years. It happens at dusk and it is boundingly beautiful. The llamas and I have hiked the trails, ground driven in harness, and competed at Llama Agility. Then we turned around and the llamas were the favorite “obstacle” when we did horse agility here on the farm. Llamas are guard animals. Naturally, it’s their job to keep stray dogs and UPS guys off the farm. For years, the ducks (and their eggs) nested in their pen, safe from lurking coyotes. If llamas think you are being rude, they are fine with taking a cush (laying down) and refusing to get up, so like me, they teach affirmative training. Finally, you will never meet a more peaceful animal who likes to share breath more than a llama.

The herd has dwindled over the years and this week, we euthanized Holiday. He was a spectacular boy, tall with big bone and heavy fleece. He was majestic and liked the women. Holiday was eighteen, which is old for a llama, even if he is the youngest of my geriatric herd. Things took a turn for Holiday during the bomb-cyclone two winters ago. The llamas huddled together in a shelter, but the wind buried them in a drift. The others had freed their heads but not Holiday. His body felt lifeless, but I chipped the ice from his facial hair and tried to resuscitate him. We got lucky but he came away with a sore back. They all have some arthritis, but he had a small limp. It got a bit worse last spring; he was slower and spent more time lying on the ground. He had good days, but you know at this point that it’s degenerative, right? Still, he was already on borrowed time and it isn’t a tragic condition to live a long life, says this woman not much younger than him in human years.

I’m no stranger to euthanasia. One of my first jobs after leaving home was at a dog shelter where euthanizing was one of my tasks. Strangely, it helps if you really love dogs. Between being a horse trainer working with rescues and having a farm, death is a common part of my life. I try to make friends with it. Euthanasia never gets easier, but you can do better for animals if you can remember that it’s not about you. I try to breathe along with the scary part. Something as ordinary as death shouldn’t be able to steal all the color from life. 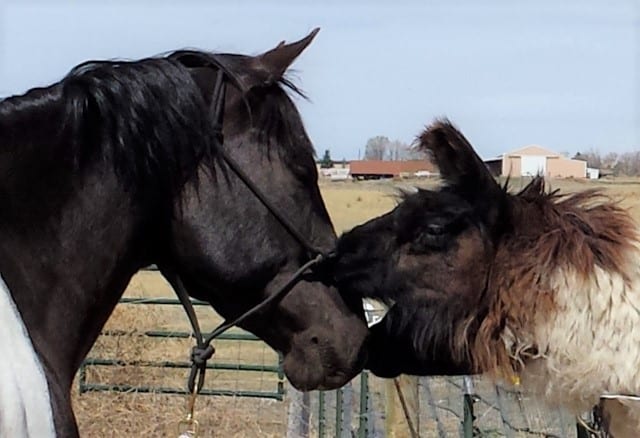 All great vet dramas begin on the weekend. Saturday afternoon, Holiday was struggling to walk. It took a day to find my camelid vet had moved and most of Monday, no one would come. Getting a llama in a trailer is as hard as letting a dog out a door, but Holiday was tilting his head around and pinning his ears at his own hind. No translation needed. I couldn’t move him.

Dear reader, take a breath. This is the worst part. Another vet didn’t call back, the frantic search continued. I finally got a new name after 5 pm. She texted back that she’d finished with surgery at 9 pm, and offered to come in the morning. I was elated.

Holiday had a good night, nibbled hay and cooled off by the time the vet arrived, but nothing is sacred; the comedy of errors that is daily life on my farm began to unfold. The new vet was good-humored as Holiday spit continuously as she did her exam. Llamas only spit when attacked, it was fair. I apologized and got a leg between them to catch the most of it. Her diagnosis confirmed what I knew. We had the talk and she asked if there is something he liked to eat. We doubted he would eat but it meant she wanted to continue at liberty, so I skipped off to get alfalfa pellets. Holiday dug right in, as bright as he could be. The vet asked if I was good to start and I smiled, “Yes, please.” He wasn’t eating because he could recover, he was eating because I succeeded in my 18-hour fight to find help. I remind you, this is not sad. It’s a gift and if I can make it easier for the vet, then better for Holiday, too. 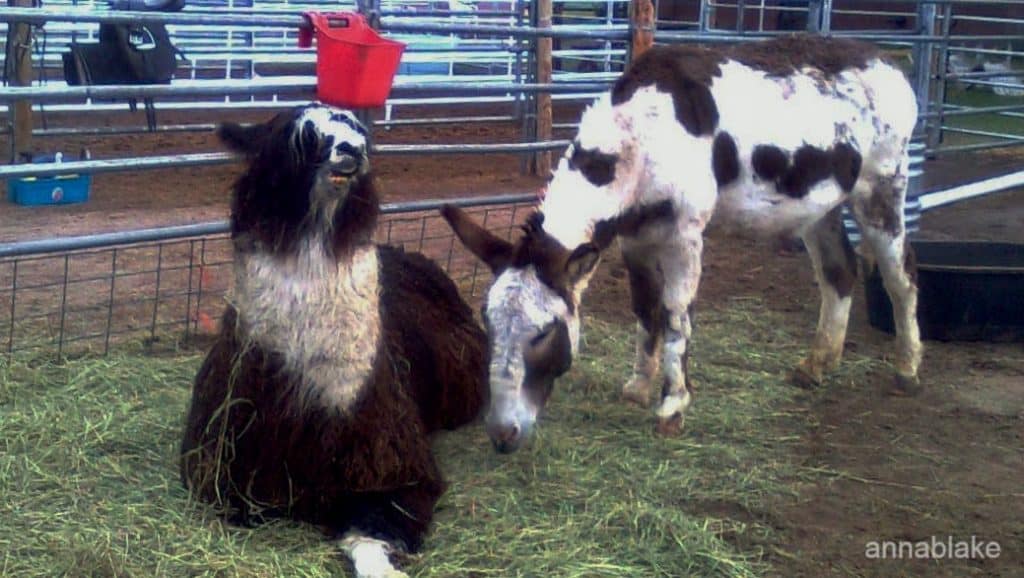 That was the moment Arthur crawled through the fence panel. Arthur is a Nubian goat, both taller and heavier than my mini horse. He careens over with a self-important bleat to steal Holiday’s last meal, giving me a light head butt to get out of the way. The vet is trying to hide a smile on the corners of her mouth as Arthur shoves his head into Holiday’s bucket and wags his tail. Calmly, I move the bucket away, dumping some on the ground and return to Holiday, with Arthur in hot pursuit. Alfalfa pellets are sacred, you know. In the middle of this ruckus, Holiday gets a few more bites and doesn’t notice his first shot. Arthur gives the vet a shove in case she has an eye on his pellets. The four of us do an odd dance, each with a task and no real control. As the first meds begin, Holiday rests his head on Arthur’s back. It’s a soft landing.

If there can be a favorite part of this sad process, mine is the moment when Holiday becomes pain-free. If you’re steady, you can see his breathing go deep. It’s bittersweet; the plain truth of how much pain he’s have been holding. The vet and I give it time. Some while after that, Arthur finished the pellets. I swear, if Arthur were human, he’d kick back, cross his legs, and eat potato chips in church. Then crumple the bag and toss it in the aisle.

Death is nothing. We must learn that it’s their pain that matters. All the horses, just over the fence, blew great snorts. Herds will always offer calming signals for each other. The llamas were ready for turnout with no big show of mourning. I think we were all relieved. If they knew that I helped release Holiday from life, they were fine with it. Animals don’t share our fears about death.

Last night when I opened the pasture gate, the llamas cantered in past me. As usual, I waited for Holiday to limp in last. I remembered what a large cria he was, how he hummed back and forth with his mum before he was fully born. But there are alfalfa pellets waiting, Arthur is desperately bleating at me to hurry, and all is well.

“Excess of grief for the dead is madness; for it is an injury to the living, and the dead know it not.” – Xenophon 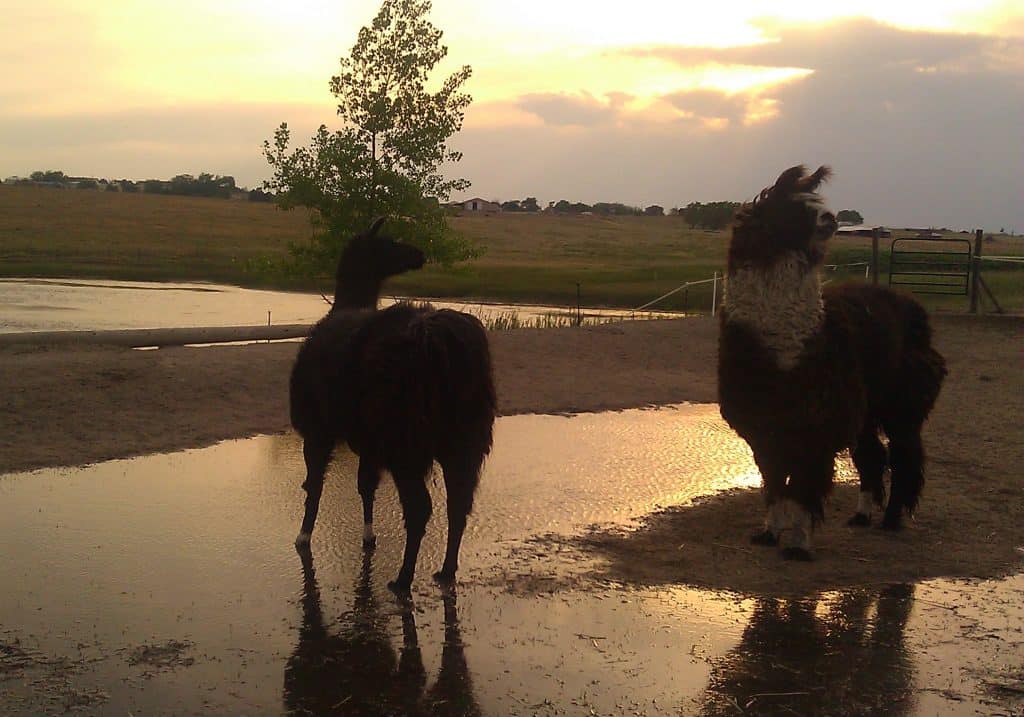 Want more? Visit annablake.com to see our class schedule, online courses available on a revolving basis on Calming Signals, Affirmative Training, and More. You can book a live consultation or lesson, subscribe for email delivery of this blog, or ask a question about the art and science of working with horses. Join us in The Barn, our online training group with video sharing, audio blogs, live chats with Anna, and so much more.

47 thoughts on “A Funny Thing Happened During the Euthanasia.”