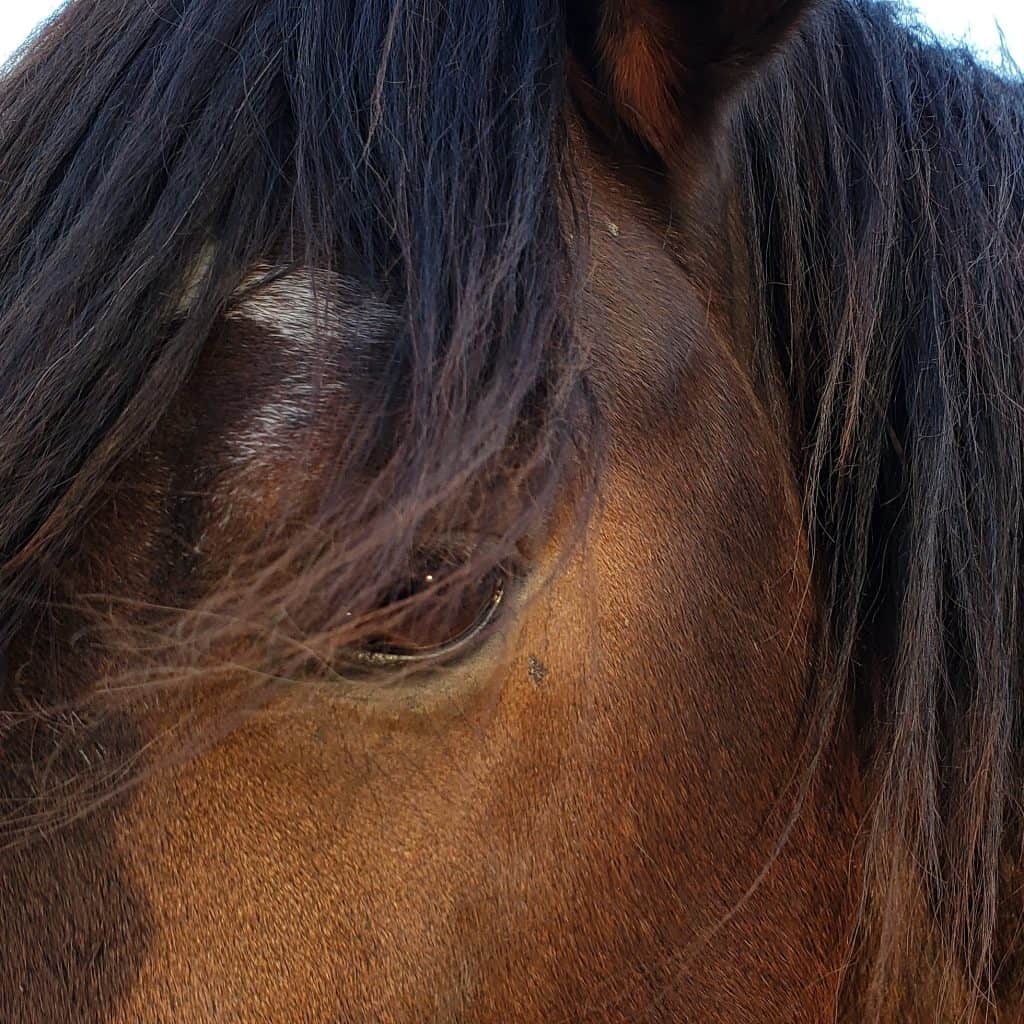 Some people are just so effortlessly magic with horses. They seem to do nothing, but horses hang on their every breath. The first time I saw my mentor ride, she was on an Arabian stallion, cantering the speed of a walk, and chatting casually with a client. She exuded cool in every essential way that mattered without a care to please anyone but her horse. A few months later, I came off my young horse for the first time. During his inaugural bareback ride, he walked to a halt, a couple of seconds passed, and I just tipped over in slow motion flopping on the ground by his hooves. He arched his neck around with a look of profound confusion to see me sprawled in the sand. Luckily, there were several people in the barn at the time who each tell a better version of the story than me.

Meanwhile, the horse has a look on his face, feigned innocence maybe, but you nurse your worst fear that he has a diabolical plan for your demise.

Now it feels like everyone is watching you, even when you’re alone.  More falls come soon after. Your horse starts spooking, not that your vice grip thighs are bruising his ribs. Maybe the horse gets too quiet or maybe graduates to crow hopping. It’s embarrassing so you try to make it seem like a joke or like it was your plan all along. Maybe you pull out a wild woman outfit: chinks and chewing tobacco. Full seat breeches and tall boots. You’re still coming off and there is always a list of extenuating circumstances, but you act like you don’t care. Riding isn’t as much fun as you thought it would be, but you can’t quit.

Meanwhile, your horse is starting to get a little hard to catch. He might be getting a little fussy with the bit, not that you’re white-knuckling the reins.

Cheer up: Horses aren’t capable of deceit. It isn’t a romantic notion; it’s brain science. It’s the frontal lobe that comes up with ideas like deception, duplicity, hypocrisy, and the general use of smoke and mirrors. Horses are not wired that way literally, the horse’s frontal lobe is smaller than a human, while the amygdala (the emotional and fear center within the brain) is proportionally larger. It makes sense for a flight animal. Even as it reflects poorly on us to be always thinking animals are just like us, even at our worst.

We’ve been told we need to show authority, a vague concept that usually fits like a seersucker suit on a sticky hot day. Or we’re trying to mimic a trainer on a video while tying ourselves up in our longlines. Or trying so hard to be perfect for our horses that the stink of anxiety fills the arena. We have an expectation of how a horse should respond and ours all fall short.

Cheer up. It gets better. This is my opinion, but it comes from hard-won experience. I believe humans are born with a finite amount of embarrassment and if you have horses, and especially if you take them off the property, you can easily exhaust your embarrassment resources in the first few years. We simply cannot maintain the energy to shrivel up every time something happens. Even humiliation loses its sting.

Then one day you have an amazing ride. Your frontal lobe, in a moment of uncharacteristic quiet, doesn’t leap in to rationalize or justify. Maybe you’re hungover from the night before or too exhausted to be over-controlling or maybe some trainer talked you into using a neckring, but a crazy notion appears. It occurs to you it’s time to give up on right and wrong. Blaming and making excuses has always been an integral part of the process but now it seems like a frivolous distraction from the conversation you’re having with your horse.

If a horse isn’t planning a violent takeover of the human race, what is he doing? That’s easy. He’s being a horse. He doesn’t have the brain capacity to trick himself, so he relies on his authenticity. He can depend on who he is. If we get over ourselves, we can depend on that too. The conversation gets interesting now because it becomes obvious that his behavior isn’t’ a training issue. Everything a horse does is a physical cue, a message. It comes with a hand-softening, heel-dropping understanding that everything we do is a physical cue, too.

Here is an opportunity to fill that hole left when your embarrassment dried up. You can replace it with authenticity. The word is overused and sounds trite to humans, but horses feel safe when we are in alignment, when our “talking, feeling, doing” behaviors are consistent. Horses read less anxiety and we seem less like a coyote.

Naturally, a horse would prefer authenticity instead of us prattling along saying one thing, feeling another thing, and doing a thing entirely different. Are horses not absolute masters at noticing when we disappear mentally? We abandon them when we’re easily distracted, lose focus on the conversation, or generally space out. If you want your horse to pay more attention to you, you must stay present. Calming signals are a two-way conversation, whether you’re aware or not.

Hindsight ambush! Guilt! We’re miserable for what we didn’t know; for past failures even if we had good intentions. Hold up, it just happened again! What is your horse supposed to do with your guilt? It’s just more anxiety to him. He’ll shut down a bit. Martyrdom is a drag for everyone. Snap out of it. You’re missing the point.

Could we give up ranting about right and wrong, complaining about how it’s supposed to look or how long it’s taking? Could we stop apologizing for our own shortcomings and just be at peace with the horse? And sorry, I don’t mean sitting in the pasture with them watching them graze. I mean when they need us to be unfailingly supportive, during a scary vet call or while trailer loading in an emergency. When we stop fighting ourselves and our horses, things get sweet. Can we allow our authentic self to speak loudest in the partnership game?

On a separate but related note, do you know how a forward and slow canter feels? It’s like being lifted up and held dear simultaneously. It’s like the rocking horse we loved as kids. It’s the dream we always had of the rhythm of a waltz before we knew what a waltz was. Back before our frontal lobe got in the way.