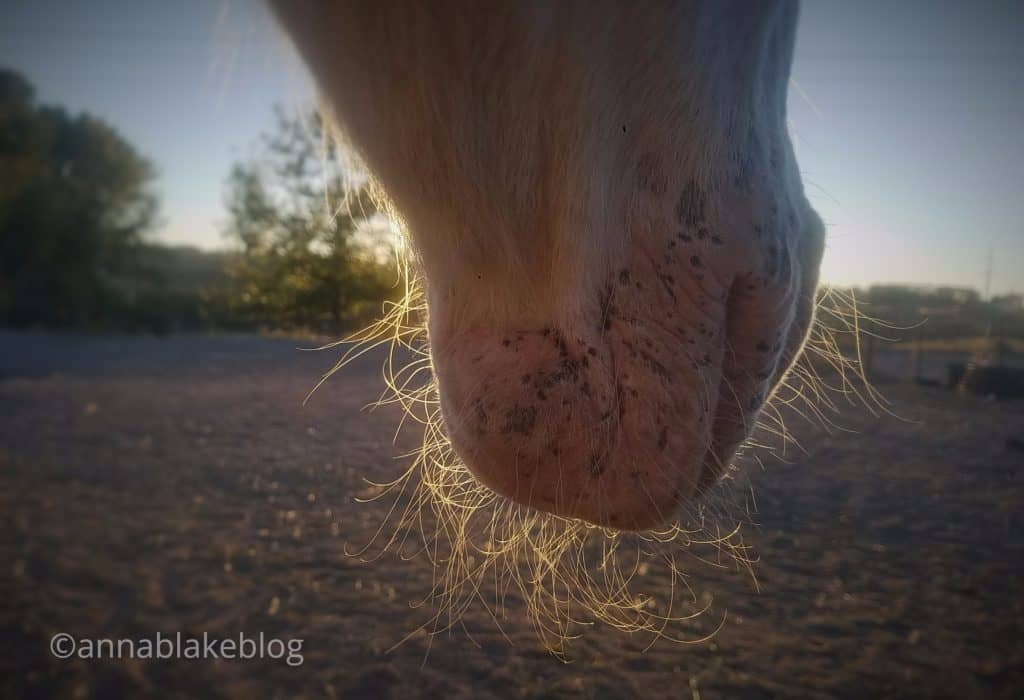 I always thought of grooming as part of the warm-up for the ride. It’s the price paid up front, a thank you in advance. I spent hours currying and brushing, trimming fetlocks and conditioning tails. My horses stood quietly ground-tied to get their ears clipped and their chins trimmed. I cared for them as a meditation; an affirmation of the love and respect I had for my horse and our partnership. No one died. Without exception, my horses looked better than I did. I was taught proper grooming by the same wonderful, knowledgeable trainers who taught me to ride patiently and train by listening. We were not monsters; we were proud of our horses, followed traditions, and did what was required or advised. And scientifically, we were still in the dark ages.

This week, the FEI, (Fédération Équestre Internationale), the international governing body of equestrian sports, has banned whisker trimming under penalty of disqualification. Hooray!

Whiskers and other facial hair around the eyes are known as vibrissae. They are critical to a horse’s spatial awareness. Horses are unable to see objects directly in from of their eyes or below their nose, and whiskers are a sensory organ used to process information, including finding food, communicating calming signals, and environmental awareness such as wind direction. The highly tactile whiskers have blood-filled sacs at their base to amplify movement. They help foals find the teat after birth and have also been found to compensate for compromised vision

There isn’t much scientific data on removing these sensory hairs on horses, but it has been studied in other mammals like rats, dogs, and cats and found to be debilitating. A large part of the brain is devoted to processing nerve impulses from vibrissae in some species. It isn’t a stretch to assume similarities with horses and see it as a welfare issue.

The USA lodged concerns about implementing the recent FEI decision. Many riding disciplines and breed organizations here have a tradition of clipping. Germany banned hairless muzzles in 1998, and many of us stopped back then as well. When we know more, we can change our ways for the better. Breaking tradition is progress, and a version of political correctness exists in the horse world. Are you feeling just a bit superior that you never trimmed them in the first place? Good for you.

When I read scientific research, sometimes I need to sit with it to comprehend the words. It seems that these extremely sensitive vibrissae are hairs that have the qualities of eyes and fingers at the same time. Isn’t that miraculous? Muzzles are certainly the most sensitive part of their bodies. Humans don’t have vibrissae so we can only guess what that level of sensitivity feels like. Some horses react to us touching like it’s a raw nerve, and for others, touching seems to shut them down. Some horses get stuck in hyper-arousal and others act like they’re ticklish. And we like to tickle their noses.

Please think about that. I use the example of getting tickled to explain to humans about calming signals that are an internal conflict causing anxiety. It’s an emotional incongruence. Most humans hate being tickled but we still laugh when it isn’t funny, as a way of releasing anxiety. Laughter is a human calming signal.

It’s important to be aware as aware of these sensory organ hairs as we are their eyes or ears when reading calming signals and communicating with horses.

Can we extrapolate a bit? Humans have always had a knack for exploiting a horse’s weak areas to control them. No wonder that huge twelve-hundred-pound horses are immobilized by twitching their nose or ear. Conversely, it’s logical that a horse would be safer and more confident with whiskers in competition and on the trail. Yay, we learned something. We have a choice to work in unison with a horse or use domination in training.

Is there a difference between a horse using their vibrissae to sense us, when we’re standing too close for them to see us clearly, and us touching their muzzle habitually? Many of us touch our horse’s muzzle without noticing. Each time a vibrissa is stimulated, it sends an alert to the horse brain at a rate of 250 mph. Did you mean to yell? We assume they’re greeting us so we return the touch as if shaking hands, but should we? If we all agree that clipping whiskers are detrimental enough to be banned, why do we have so little compassion for horses as to mangle their most sensitive noses? Should we keep our hands off their faces and put a quiet hand on their neck or bury our noses in their manes instead?

I constantly see horse lovers and even professionals, standing face to snout with horses, unconsciously tweaking noses, adjusting their forelocks for no reason, and just generally fussing with the horse’s face. Invariably the horse is showing subtle calming signals like dead eyes, trying to communicate that the human is too close, but we’re too busy loving them to notice. When the horse closes his eyes, it’s easier to think he is bonding in some mystical way than pulling inside to escape the attack we aren’t aware we’ve launched.

And that’s how it happens that a horse lover with the best intentions might groom their horse to a shine, clipping every errant hair. We don’t do it because we’re monsters. We don’t know any better, or we don’t think it through from the horse’s side. We follow traditions rather than science. We lollygag in our frontal cortex, telling ourselves stories, forgetting that a horse’s brain is focused on survival. While we sing love songs, they eternally ask if they’re safe. It’s unflattering to us to think in terms of predator and prey, but horses are hardwired for nothing else. We think we’re initiating a conversation but might we be doing the opposite?

Here’s an experiment: Stand at your horse’s shoulder, facing the same direction he is and in his direct line of view. Notice any change in his face or poll. Exhale and find stillness in the earth. Think of it as asking a question with your body, and then leaving a vacuum for your horse to answer. Every horse will respond differently according to experience and confidence. If it’s a change for the two of you, they’ll show some anxiety by moving, but hold to the experiment. Notice how much you want to touch his nose. It was the hardest habit to change for me. I had to use my pockets.

Then give your horse the confidence that you won’t clip away his sensory organs, but more than that, that you will respect that most sensitive area. No matter how much you want to touch his velvet nose or kiss that adorable snip of white on his muzzle, try to understand it from your horse’s side. Then make a conscious choice.

Want more? Visit annablake.com to find over a thousand archived blogs, purchase books, schedule a live consultation or lesson, subscribe for email delivery of this blog, or ask a question about the art and science of working with horses.

The Barn, our online training group with video sharing, audio blogs, live-chats with Anna, and the most supportive group of like-minded horsepeople anywhere.

Courses and virtual clinics are taught at The Barn School, where I host our infamous Happy Hour. Affirmative training is the fine art of saying yes.

35 thoughts on “Calming Signals and Whiskers”