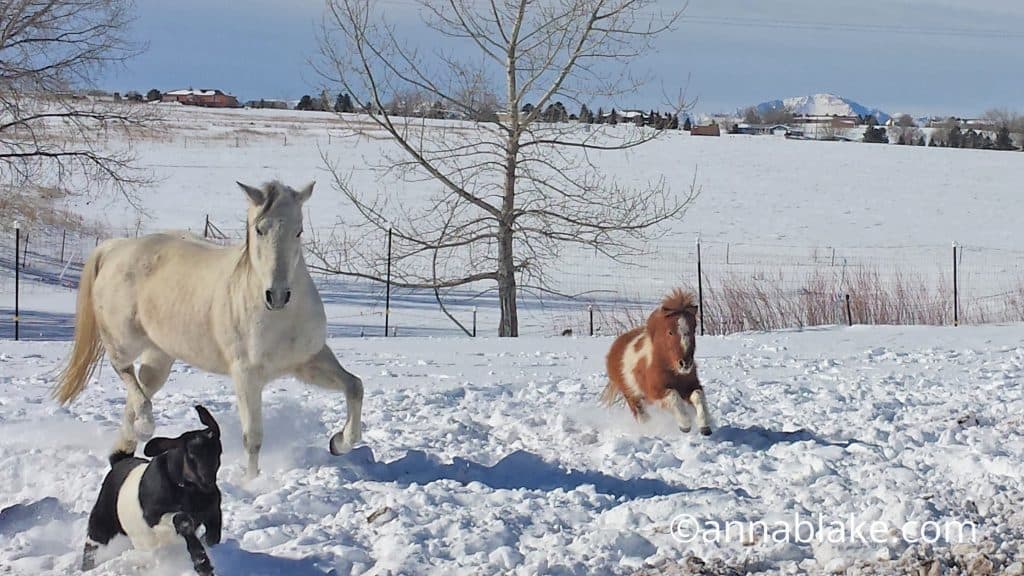 It’s February on the high prairie at the fringe of the Rocky Mountains. The pond is still frozen so there is an unnatural quiet, no bird chatter, no wings in the sky. After months of feeling that light is somehow a product of ice lighting the ground, the sun feels just a bit warm again. It’s still below freezing, but a winter jacket is too warm. An hour later, the temperature hasn’t changed, but it feels like a polar front, and fingers sting inside of winter gloves. The angle of the sun is shifting, a month from Spring equinox. The sun has been low in the sky even at midday. In the summer, the sun is so direct it would fry an egg, but now it’s just peeking through prairie grass, teasing us. The ground is still winter-dead. This is the time of year that storms get more violent, but we beg for any moisture, we measure the angle of light, the moments lengthening before sunset.

In this quiet dawn of a new season, lost in thought, I hear a jarring sound somewhere between a fat cat being shut in a door and a low moist dragon fart. Stop and listen: a half-mile over on the paved road, sometimes semi-trucks let out a backfire rumble while downshifting. Sometimes a Harley pulling onto the road makes an internal combustion growl that carries from a distance. The sound comes again, deep and raw, followed by the clang of metal remarkably close by. Oh. it’s just my mare finishing breakfast, slamming her hind end into the feeder, and snarling like a grizzly bear. Her companions, like me, have frozen mid-chew. Seasonal Tourette’s, I think. Not a mechanical explosion, after all. Walking over, I give her a light scratch on her hip and draw back enough loose winter hair to line a bird’s nest. Yesterday there was none.

For folks who live in town, the weather is small talk, but weather can be life and death news while caring for livestock during changeable seasons, even on a small farm. As we’re busy cleaning tanks, chipping frozen manure, and waxing poetically about how tough we are, living in the real world, it’s a good time to remember that we actually live inside of climate-controlled houses just like townies. It’s the horses who live in the real world, each of their senses sending indelible messages that we can’t imagine. What does it smell like when the ground comes back to life? What does it feel like to shed dry winter hair in a full-body itch? Is the angle of the sun a reason to gallop in full flight, kicking hooves to the sky? Is this level of awareness exhausting for them, ever on alert? Even at times that humans are the most aware of our environment, our senses are muffled and dull in comparison.

A reader asked about the difference/intersection between a flight response and springtime forwardness. I think she’s asking in a politically correct way about why horses go nuts in the spring. She said, “… it got me thinking about how some people love the roller coaster and others of us can’t understand why we would put ourselves into what feels like panic mode. Or how I have found my excitement about engaging with a horse can escalate and sort of tumble physiologically into a non-specific fear response.”

I think her question about roller coasters might be the answer to how horses feel. We have the same nervous system, after all. When peaceful activity turns into a full-out bolt, we feel disoriented and left in the dust, mentally as much as literally. Maybe the analogy of a roller coaster is what it means to be a horse living in an unpredictable world.

Think of the process of encouraging a horse’s confidence. There is that time when you might be leading from behind or just taking a horse to turnout, allowing curiosity to rule as he sniffs his way down the aisle of the barn, then edging his way to a path, his eyes taking it all in as his neck stretches low. He’s alive in his environment, his ears pointing out interests beyond our meager senses. Does the earth breathe differently when seasons change, can his whiskers sense the beginning of grasses before they are visible? Did he see a flicker of movement in those trees? Are fawns being born, leaving the scent of afterbirth in the air? That’s when he’s the only one who notices he’s a few steps too far from the herd.

We’re thinking about work or dinner plans or riding goals, but an instant later, your peaceful little nature walk has exploded like a field of landmines. You think he’s spooked at nothing, both jerked into a tug-of-war over the lead rope, and your horse seems to be frightened by the sound of his own hooves pounding a staccato sound on hard soil. He thinks he might die, and real or not, Seasonal Tourette’s can feel like a bloody profanity, spit to the wind for no good reason, as the line between curiosity and fear disappears entirely.

Humans want answers. What did he see? Why did he spook? We want an intellectual explanation for an instant in the environment that never rose to meet our limited senses in the first place. We don’t understand our own emotion-based fear response, but we seek a logical answer for our horse’s behavior because thought is a self-soothing activity for us. We can feel safer if we can find reason in chaos. We wander through potential answers while as usual, our horse remains fight animal, marginally domesticated if at all, living outside our climate-controlled brains, looking for the next danger. Lost in our thoughts and living a moment in the past, we never catch up. Autumn is no less alarming for horses, life is change.

Horses are never truly domesticated. That’s what it means to be a flight animal. On the days when the world becomes alive in a different way, a change of weather or herd or location, and they seem to have a case of Seasonal Tourette’s, but isn’t that a reasonable equine response?

This is your seasonal reminder that your senses are not a good match for a horse. Their reaction time is seven times faster than ours and the existence of our frontal lobe is no advantage. It’s less important to immediately know why, and more important to not make the horse wrong for having better senses than we do.

This is your seasonal reminder that it isn’t about whether we like roller coasters or not. If we live with horses, we’re on one.