How Humans are Different from Horses 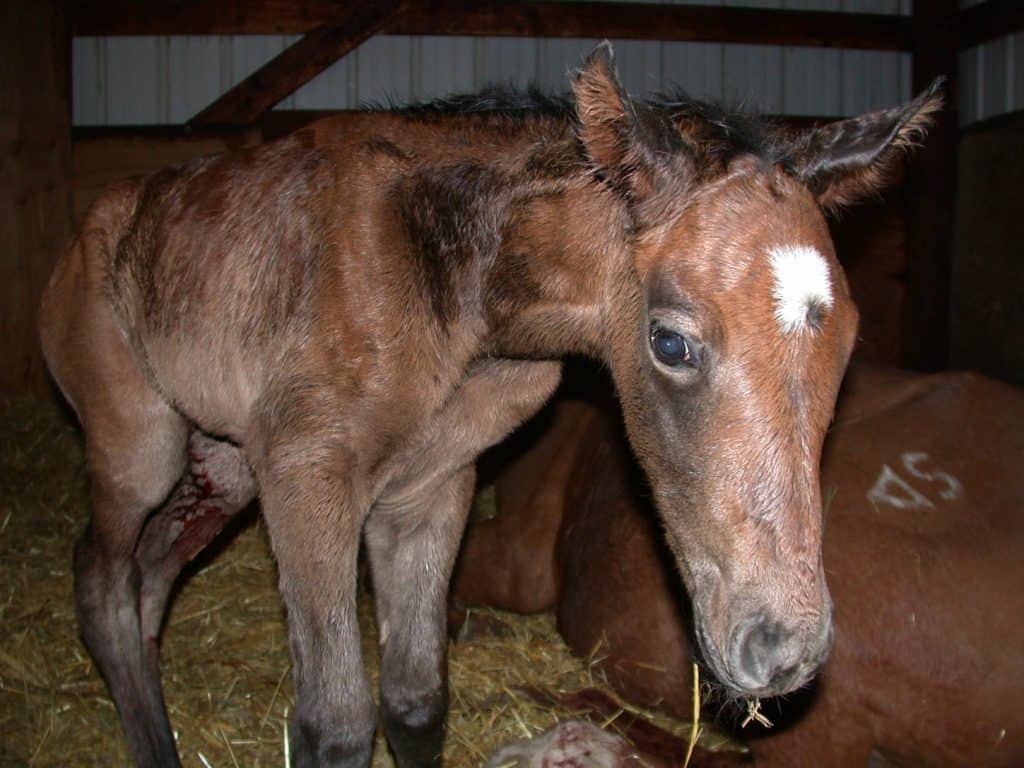 In the beginning, a filly is born. In the hospital, a baby girl human is born.  The filly stands almost immediately. The girl breathes and cries. In less than one week, the filly gambols laps around her mother on long legs at breakneck speed. She is champing, a calming signal sending a clear message, and begins demonstrating the Flehmen response, the first behavior that will eventually be associated with sexual behavior. At the same age, the girl comes home from the hospital and can barely see past the end of her nose.

The girl will take another month or so to lift her head, and start walking, finally, at around 18 months. By then, fillies have gained over 2/3’s of their full body weight.

Around two years of age, the girl will enter a normal developmental phase experienced by young children that are often marked by tantrums, defiant behavior, and lots of frustration called the “terrible twos.” Finally, some commonality. Two-year-old fillies often show similar behaviors, but they are adolescents capable of breeding. They have raging hormones as well as immature minds. Two is a good age for those around girls or fillies to breathe, take a deep seat, and a faraway look. Wait it out.

Horses mature slower than we’d like and girls even more so. I wonder if some of us ever do where horses are concerned. We want what we want.

By 11, girls might be interested in STEM (Science, technology, engineering, and mathematics) and are feeling as awkward as possible. Many are card-carrying tomboys who live in barns and like biology. Mares that age have found their mature strength, all bones and joints are fully developed, and they are glorious. Then around 13, girls hit adolescence —or adolescence hits them, and some of us revisit our terrible twos.

The productive potential of a mare typically begins to decline by about 15 years of age, along with her prime riding years.  At 15 some girls worry they’ll get pregnant walking past the boy’s gym and others swear off boys forever. At 15, most girls have given up STEM courses, because of peer pressure, or lack of role models or family support. For most, it’s a time of insecurity and even if we are beautiful and smart and capable, it’s a time when the pressure to follow societal norms is high, whether you try to fit in or not. We look to less well-paid careers, are encouraged to give up crazy dreams, and feel our shortcomings.

“We have to rethink the way we raise our girls,” Reshma Saujani, founder and CEO of Girls Who Code says. “Boys are pushed to take risks; girls are not. In fact, they feel like they have to be perfect at everything they do; they see getting a ‘B’ in math class as bad. We have to teach girls to be imperfect.” Mares do seem to help us with that, one way or another.

Women who have children then spend around 18 years rearing each child, mares usually wean their foals at about a year, and the young transition to herd-mates. Most people don’t reach full brain maturity until the age of 25, with the last area to finish, the frontal cortex. Hence, teenage behaviors and “poor” decisions. Horses have a small frontal cortex that does not serve the same function as a human’s or develop with age. Horses have a lightning response time, and we overthink. Horses read the emotions and anxiety in our body language but that doesn’t mean they share the same emotions.

Mares cycle less frequently after 18, as they become seniors, but are still capable of breeding into their 20s. Women go through menopause, the ceasing of menstruation around 50, and for some of us, exhibit behaviors only slightly more mature than the terrible twos. Mares continue to have some level of hormones throughout their lives, more like stallions than geldings.

At some point, most women stop asking permission and curtseying to the wishes of society. Mares say about time, not that we ever did.

Mares are prey animals, flight being their common response to danger. Every day is life or death, domestication doesn’t change that. Mares keep their eyes to the horizon, wary of danger while managing cooperation in the herd. Their primary concern is safety. They are considered motor sensory animals; they run before they think.

Women are considered predatory animals. It’s an oversimplification to say we eat meat. Predators that exert top-down control on organisms in their community are called keystone species, one that has a disproportionately large effect on its natural environment relative to its abundance, a concept introduced in 1969 by the zoologist Robert T. Paine. Examples are bears, wolves, prairie dogs, and humans.

As with many predators, women are also prey to other predators, including those in our own species. Humans feel fear and an instinct to survive. We have a similar autonomic nervous system to horses.

The lives of horses and humans have been intertwined for centuries, we have depended on horses to carry us to where we are today, and we owe them a debt. At the same time, humans need horses less now than ever. It’s awkward.

We set about training horses, but we’ve been fed a false narrative, a story told by predator-humans who saw some small part of themselves in horses, and believe domination is their natural right. They call it herd dynamics, but the behavior of stallions does not define the herd any more than the behavior of men solely defines humanity.

But train on, we do. Forgive the horrible generalization, while men dominate, and women coerce by more passive-aggressive means. The goal is the same, we manipulate equine behavior and say we listen. Humans listen to horses, (another harsh generalization,) like men listen to women. We lack understanding of their unique nature and experience. We want what we want.

Dominance-based training methods have caused anxiety and dysfunction for horses, and some women, too. What would happen if humans stopped treating horses like a lesser species? Rather than training horses things they already know, we studied their ability to cooperate with each other. We could mirror them, learning their language of calming signals, and then quietly negotiate desired behaviors. When women of a certain age value their experience of being at times both predator and prey as a special perspective in training horses and acknowledge that our maturity-earned common sense and patience, we will understand our worth to horses and ourselves.

Horses teach us so much about who we are and yet they remain a mystery to us. Horses are always horses. Perhaps instead of looking at our perceived similarities, we would do better to understand our profound differences.

25 thoughts on “How Humans are Different from Horses”