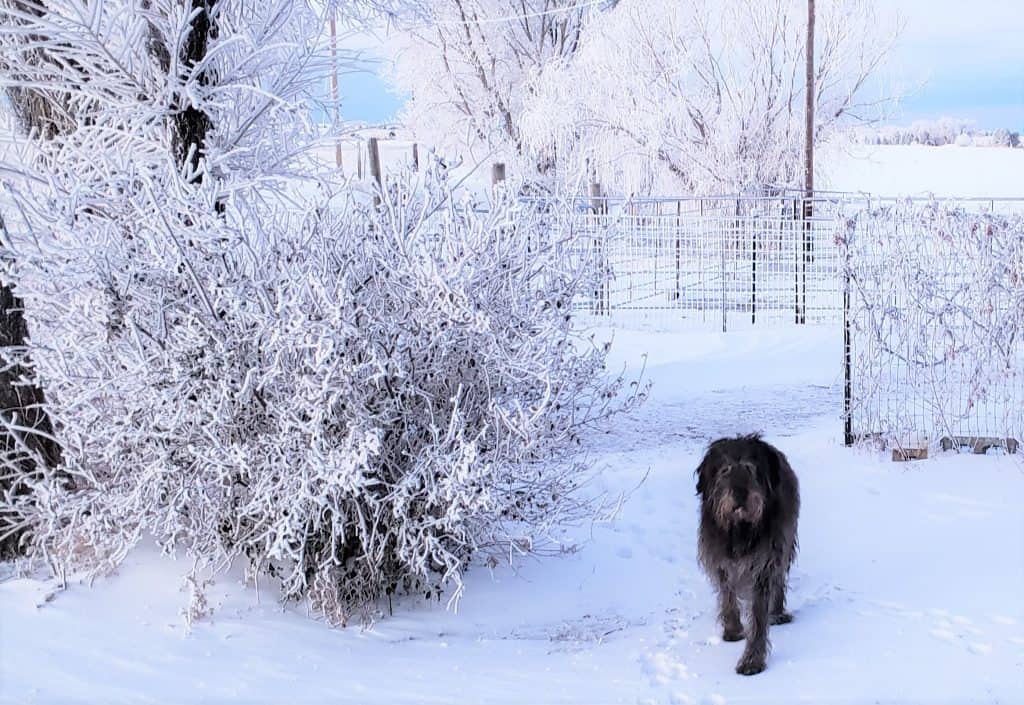 I was raised by people who didn’t let dogs in the house. The common opinion was that dogs should live outside or in the barn. On our sheep farm, there was a hard line between us and the animals we depended on for a living. But my mother insisted I spend the day outside with my father and farmers are notoriously lousy babysitters. So, I ran with the dogs and the line was blurred immediately.

In my twenties, my dogs had to have long hair. I cried a lot and multi-tasked them as mops. We left the house at 10 pm and wandered down suburban streets peering in windows from the sidewalk. We saw furniture, men in tv light, and women in the kitchen. Cats peered back from windowsills. I was slow to find a real home, but the dogs gave me a place to be after work, they walked me until I was calm, they gave me a place to sleep at night. It isn’t that I didn’t have relationships. It’s just that when they broke up, I got another dog.

Over the next two decades, I brought generations of dogs to work with me in my art studio/gallery. Many wore black, some had ears like French hats, and they affected an artistically skeptical gaze. Aloof, oblivious of children, and cautious with strangers, the dogs were too cool to wag. Any illusion of sophistication I have, I got from them. I learned to have a dog in my professional headshots because alone, I’d tense my neck and hide between my shoulders in a way that made my head look the size of an apple. When people asked if the dogs were in the gallery for protection, I tensed my lips into a straight line over my teeth nodding, certain I was hiding my secret.

Once I moved to the farm, the dogs stretched out. They napped by the arena when I worked horses and trotted along to the barn for chores, always tripping on my heels and pulling my socks down. They took the herding job seriously, running laps around my pens to keep track of the horses and llamas inside. When I trained off property, they came along to guard the truck. At night we shared a beer and howled at the coyotes from the comfort of the porch. Horses may be my fondest passion, but I slept in a dog pile.

All dog stories end the same way, but I’ll never blame a dog for having a shorter life than mine. I did my best to help as long as I could and then let them go before the worst. Sure, I mourn them, but wouldn’t it dishonor a dog if we gave up herding or playing ball or sleeping in a pile? Wouldn’t they prefer their beds are used and their bowls filled? Of course, I cry big snotty tears and hack phlegm into a wadded-up bandana, but since I will miss that good dog forever anyway, I get another dog.

A different generation of dogs naps under my desk tonight as I write. Literary dogs have a barely audible snore, tend to be a bit soft in the waist, and would have you know that writers are as clever as clothes on hangers.

When the pandemic canceled my travel schedule, I started an online Barn School and the dogs took up a second job timekeeping for Zoom meetings. Preacher Man is a master of wiggling into my lap as I start to wrap up, staying just off-camera, but digging toenails in as he spins to settle. He’s a bit too long to be a lapdog, but he’s no quitter. On camera, I look like I have gas, a sporadic speech impediment leaving me unable to finish a sentence, like my breasts have suddenly come live inside my shirt.

I’ve been self-employed for over forty-five years now, and I have never worked alone. I’ve never even gone to the bathroom alone.

When my parents were alive, they frowned at my rag-tag hairy family, saying it wasn’t how I was raised. I remember differently. Dogs became family not just because they were the historical choice. They seemed remarkably good at it. Dogs have had my back, in one way or another, all this distance and not once was I lost.

There is always an old dog in the pack. Right now, it’s Finn. He’s the Dude Rancher’s dog, my step-dog. I swear, draw any line you want, and a dog just won’t care. Finn is one of those dogs who hated to play ball but didn’t want to disappoint. He’d saunter out to the ball and pick it up. Then he got flustered, looking both ways first, he’d skulk away. If you chased him down and threw the ball again, he’d follow it nervously, feeling obligated to pick it up, but then look embarrassed. Sports-dread. He wasn’t stupid, it’s just his heart was never in it. Now his hind legs don’t always move properly, so I stand behind and to one side. We both take old-dog-sized steps. I never nip at his heels and it’s useless to talk to a deaf dog, so I wait. The slower Finn goes, the more time I take. It’s about the only way a human can improve for a dog.

Car rides scare Finn now. Loud voices make him cringe. He thinks the backyard might be haunted. Sometimes when I’m sitting on the toilet, he rests his gray muzzle on my knee and lets me know he’s fine. That it’s okay being an old dog who likes a head scratch. No regrets and no more plans for the future than he ever had. He’s fine, as near perfect as a dog can be.

A deliberate old dog with gray dreadlocks and a
stiff stride paces the backyard. A badly constructed
mixed-breed with a heavy body on spindly legs,
but too restless to nap. He has worn a path along

the fence line but he remains a bit bewildered, not
trusting his clouded eyes, his nose intent on the air.
Is there something in the distance just beyond? Give
him extra at dinner to hold his weight, an egg on top.

Call his name. He appreciates the reminder with
a wag but doesn’t come. Old dogs do as they like.
It’s cooler after dark, but he can’t find his way back
inside, so he stands and barks in a flat tone, one boof

after another, plaintive and blunt. Here. Here. So,
I go there, guide him up one step and in the door.
He takes a drink, water trailing from his whiskers
across the linoleum, then again, the plastic flap-flap

of the dog door. Soon he calls, more impatient now.
Here! Here! Answer the bark, rescue him. Hold the
door wide, wait till he recognizes me in the threshold
light. Give him the time needed to remember his home.

He pauses to listen, his ears long deaf. Still not certain,
he rocks onto one leg to pick up the other, and just so
tired, he paddles past me, his tail following reluctantly.
Not a wag really. It’s more like a slow wave goodbye.

46 thoughts on “Learning to Herd: How Dogs Become Family”