Saying Yes to a Horse When You Mean No 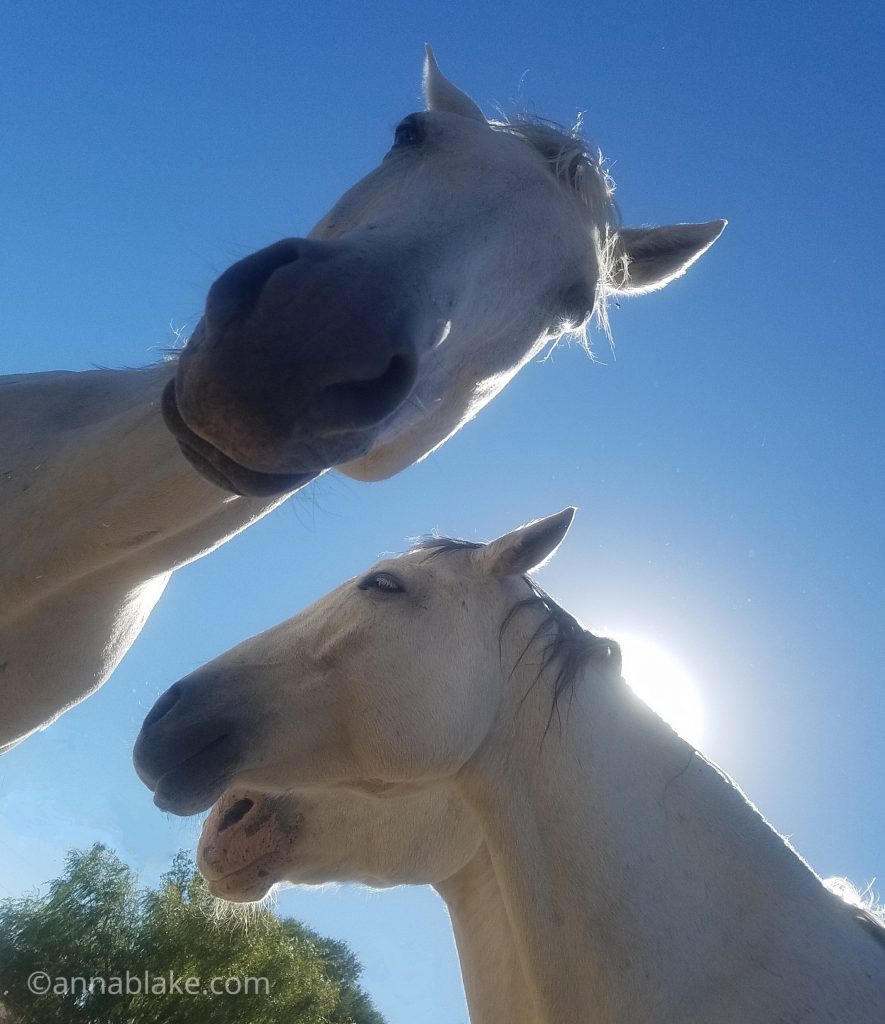 Sometimes something someone says sticks with you because it’s brilliant. Sometimes it sticks because it’s plain wrong. I was working for a horse rescue a few years ago and a bodyworker came to visit the horses. The bodyworker did noticeably light and sensitive work on banged-up sway back elders and the herd melted in acknowledgment. Shy horses came near. Calming signals were shared and the herd grew silent in that eloquent way that humans never quite manage.

In moments like this, horses show us their vulnerability. Whoever started that story about herd dominance being the truth about horses has never spent much time in the pen. It’s always been about feeling safe even with their instinct to constantly be on guard for danger. It’s in quiet peace when trust feels nearly palpable. Their calming signal so plain, “I’m no threat to you. You don’t have to be so aggressive.” We moved from horse to horse in the pasture, breathing deep into our bellies just because the horses were. It wasn’t a special moment, it was ordinary. Just the way horses are if they are safe from predators. When did this get mistaken for boring?

Back in the parking area, the bodyworker asked if the rescue needed any training done. Careful to add that the training was different because you had to be a strong leader and discipline the horse to be obedient. I was sure I’d misheard, but the bodyworker/horse trainer chatted on about dominating horses with a smile as sweet as spring grass.

I remember this Dr. Jekyll-Mr. Hyde horsemanship disorder because this sort of inconsistency is crazy-making for horses. One moment standing close and whispering, the next barking out ask-tell-make orders. Could anything be less trustworthy?

The bodyworker was a two-for-one deal, but most of us were told to be the boss when we started with horses. The plan was to climb on, and when your horse did something wrong, correct him. It was our job to evoke a quick response from a horse. Act tough, be tough, and get it done. We believed that a horse must be forced to work because volunteering was out of the question. It’s a depressing tradition but it’s all ours. Punishment is the lowest form of expression, even horses have a more evolved language than “NO!”

Lots of us still feel guilty for things we were taught to do before we knew better. Now we’ve sworn off fighting with horses, but that creates a new kind of confusion. We want to do everything at liberty. Or maybe with a whip in a pen and call it liberty because even now we don’t trust the horse. We don’t trust the silence as we stand in the pen anxiously trying to be patient. We wait for the horse to saddle himself, but we’re so busy coyote-watching, that we’re deadly quiet. Any mare will tell you, (persnickety ears), that someone has to start this thing. Meanwhile, the gelding is hesitant because he expects to be corrected, (dark partly frozen eye) knowing he’ll be in trouble soon. It’s the only thing he’s confident of is that people always get scary. He thinks humans (looking away) are unpredictable.

Now being with horses feels as awkward as a junior high school dance. So much anticipation and no rhythm at all. You lose faith and decide just this once, you’ll escalate and get it done. And thus confirm your erratic unpredictable nature to your horse. Or maybe your mind is flooded with techniques/methods/advice that all yell at you at once and you just stop because you don’t want to get it wrong any more than the gelding does.

Looking for the middle path between extremes?

It feels good to stop fighting, both you and your horse release anxiety. Let it be simple. Your priority is the horse’s anxiety level. Punishing a frightened horse is as bad as it feels. Start by being consistent in who you are with your horse. Give him the safety he wants. If you like the clarity of discipline, maintain kindness in yourself.

Giving your horse a voice doesn’t mean you give yours up. Giving a horse choice builds confidence but that doesn’t mean let him eat a bag of grain. If he stands at the front gate, don’t let him loose in road traffic because he asked. Be his guardian, keep him safe but know that partnership means two voices. Let yours be consistent and affirmative.

Our overall intention is what matters most, a tendency shown in our temperament. In Affirmative Training, the human gets to say what the task is. And the horse gets to say when.

Level ground is needed for trust. In the beginning, it feels like chaos to breathe instead of intimidating. And the horse will take the time needed to begin believing he is safe with his predator and relax his guard (lick and chew) bit by bit. Job one is to lessen the horse’s anxiety the instant we see it. Rather than evoke a response, we relax. He can’t learn if he’s frightened and we need to prove we understand that. This part takes the time it takes but if you give in to past methods, it will take longer.

If we constantly micromanage, horses will constantly resist. So many horses are broken down by constant correction when it isn’t needed, then don’t give a good response when it is needed. We increase the micromanagement. Soon fighting is just the ordinary language. Is our culture one of correction and over-management, or total permissiveness? Or can two negotiate?

Sure, bad things happen. Injuries or extreme circumstances. I don’t expect horses to volunteer against instinct, but we can maintain a tendency of peace in a chaotic world. He’s reading your calming signals looking for confidence.

If a horse evades a task, it’s never personal. Maybe a horse gets out and you must bring him back. Walk up calmly and say “Good Boy” even if you’re late for work. The priority is always the horse. Give him a scratch. He won’t want to return, so reward him, even before his first step. Keep your focus on his emotional state above the task. It isn’t what we ask, it’s how we ask.

Maybe your horse is getting into something he shouldn’t. You don’t need to rush to scold. Give him an amiable cluck to move along. Use your voice to help him be safe. Hold to the hard-won tendency of kindness even as you assert boundaries. Learning finesse isn’t a quick fix for either of you.

Affirmative training is the fine art of saying yes