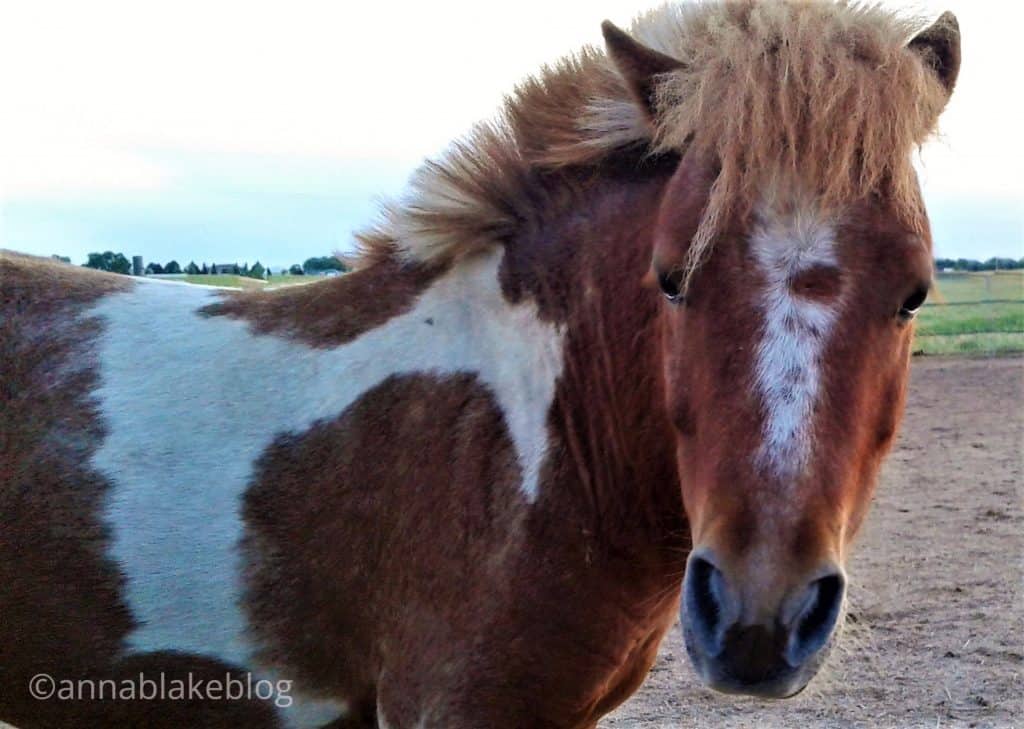 A clinic organizer was telling me about a trainer she brought in, someone whose approach was significantly more aggressive than mine. I asked how it worked to have such different approaches for the same riders and she said, “Oh no, he has the same training theory as you do. He told me that for a clinic he has to get results quickly so people don’t get bored.” My next question was going to be about integrity, but I bit my tongue. Is this who we are? Don’t even start with me about mustang challenges, colt-starting challenges, or the dreaded comeback challenges. We’re impatient enough without baiting each other on.

What is it about ponies and minis? We use horrible training methods and then call them stubborn. We tease them with sweets or dominate and manhandle them in ways we wouldn’t dream of with a seventeen-hand horse. Over the years, I’ve retrained quite a few. It’s slow work but it’s a debt we collectively owe to these intelligent, athletic, and sensitive horses.

Meet Bhim, who came to my barn for a month of training in 2013. Yes, he’s still here, and don’t you dare call him cute. Look at his face, really see him. He is not a horse to underestimate. Let the insulting diminutive words rest. Hold your “what a sweet baby” comments. This horse has forced me to redefine my approach with training again and again. And if there was a patience challenge, we would be front runners.

I put Bhim in a pen when he first arrived, with Edgar Rice Burro keeping company in the next run over, like usual for visiting horses. Bhim hated both of us.  At the end of the first month, I hadn’t made much progress, but I’d spent hours listening as he had told me his history. I was intrigued by his strength of will against giants. He wore his fear as bravado. And maybe he reminded me of someone.

He stayed in his sympathetic system; never frozen, but always in flight mode, and ready to fight. He didn’t let down. I never saw him blink or eat, and mucking his pen frightened him. I spent time like it was free, I moved slowly as he insistently bolted. I refused to corner him. I stayed quiet, breathing slowly, reading barely-visible hints at calming signals. Bhim only knew one volume, a primal scream, and he was stuck. By the second month, I was able to halter him in forty minutes or so. I didn’t train him, mind you. He taught me a position where he allowed me to approach, but it was easy kicking range and we both knew it. He demanded my trust first.

Instead of Edgar simply calming Bhim as he had every horse before, Edgar became his protector. Donkeys can be territorial, but this was different. Edgar was still my training partner, but with his head through the fence panel, he breathed calming signals for Bhim. Edgar Rice Burro, who has never liked horses much but is never wrong, let me know that it was time he had a horse of his own. I’ve never been able to say no to that donkey. We adopted Bhim, partly because Edgar wanted him safe and partly because I knew it was going to take more time than was reasonable. Don’t get all weepy on me. Trainers can’t save horses in need; there are too many. I say “no” hundreds of times for each “yes.” My last “yes” had been Edgar, years before.

Bhim and Edgar soon shared a pen. Edgar used his body like a reverse round pen, standing still as Bhim and I slowly circled. If I took Bhim out on a line, he usually got away from me. We spent a few months finding a way to make trimming easy for him. I didn’t train him, mind you. He told me what he could tolerate and that’s what my sainted farrier and I did. It wasn’t perfect, but it got easier each time we didn’t fight about it.

Affirmative training is collecting good experiences with the horse. It isn’t that we train canters or picking up hooves, horses know how to do that. We work calmly, not allowing the horse’s anxiety to overtake them. We train that predators can be trusted, building their confidence so horses can volunteer to work with us. We always remember that intimidation and punishment destroy trust. Humans and horses learn to be reliable over time.

Every few months Bhim would have a reluctant breakthrough because I have glacial persistence. One year I was able to give him a brief massage. He never relaxed, but his eye flickered for a moment, then went hard again. I couldn’t catch him for a few weeks after. Each time he softened a little, he’d act like he’d had an embarrassing one-night-stand and pretend he didn’t know me for a while.

Training should never be a competition. It takes the time it takes, no matter who you are. When clients get impatient, I’m stumped at why anyone would think working with horses wouldn’t take serious effort and a strong heart. I blame these stupid challenges. Don’t take my word for it, read the horse’s calming signals. Hurry the day when outdated fear-based training is gone; when we stop equating intimidation with respect and mistaking shut-down fear for trust.

How much of the present with horses do we hurry through for the future? Horses need time. Rarely as much as Bhim, but all horses are hardwired for flight. It means they’re easy to intimidate. Children can do it. Getting along with horses is the real skill.

I had to look at the calendar to find the year Bhim came. Seeing the names of several other horses who arrived that year with one problem or another brought back memories, each horse an individual, but I always asked the same question. “Can you trust me?” They moved through my barn to new homes and others arrived. I love the slow-dance rhythm of training.

Bhim walks now. Not a ground-covering gait, he’s relaxed, almost slow. Sometimes when I’m hanging hay nets, he presents his ears for a scratch, but just one. I’m still the only one he allows but I can halter him in a relatively normal way. He gets a bit of bodywork. Sometimes I think I see a spark of a volunteer from him. He’s always tried his best. One afternoon last summer, I sat down on a bucket (he doesn’t like people lurking above him), to take his halter off. Bhim lingered for a few moments. He yawned for the first time. I gave an exhale and he yawned a few more times. Then he ignored me for two weeks.

It was never personal. None of it was bad behavior. It’s who he became to protect himself. Bhim’s more horse, inch for inch, than a warmblood. These days, his resistance is less fear and more habit. Edgar is getting older, so Bhim stays close. I’ve changed more than they have. I’ve learned how to listen smaller, to trade time for their anxiety. We don’t walk on eggshells but we don’t pick fights. I thought I owed Bhim a debt for what other humans had done to him, but really, I owe him a debt for what he has done for the other horses I train. If you’ve read along or worked with me, you owe him as well.

Bhim would be the first to say it isn’t easy being a trainer’s horse. This woman never gives up. But we live in horse time, where progress is measured in inches and years.

46 thoughts on “Patience in Real Time”