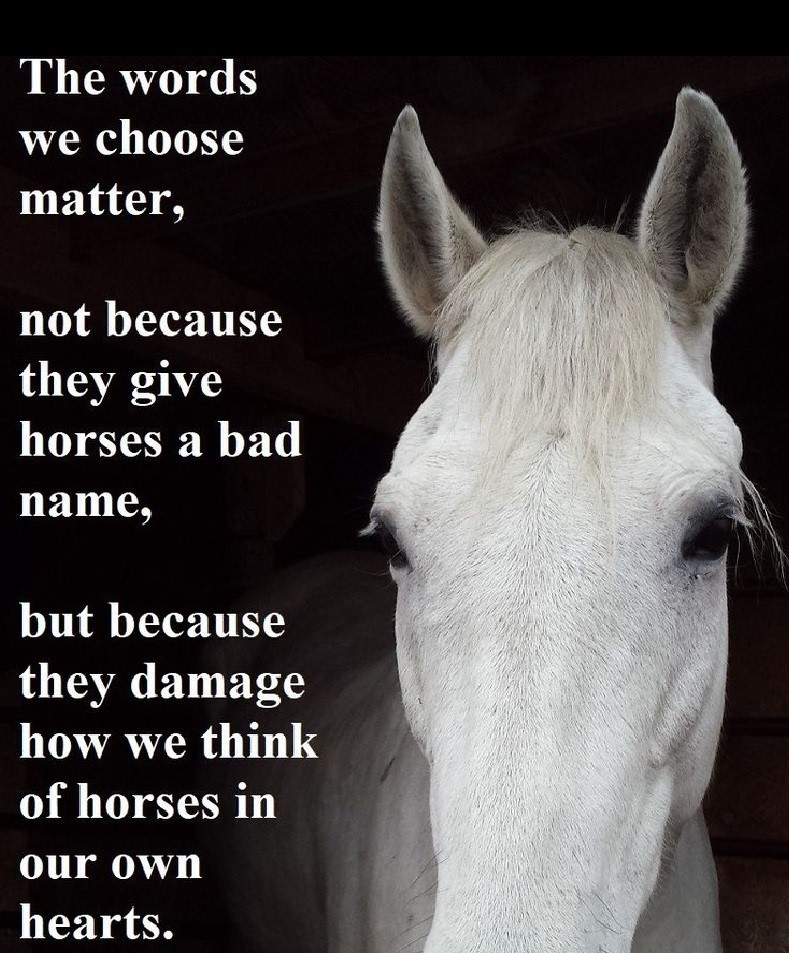 Sidney Poitier died this year and I mourn him. I was not the only girl who swooned over him in To Sir With Love but the performance that galvanized my opinion of him was In the Heat of the Night, with his famous line, “They Call Me Mister Tibbs!” Impossibly, I was watching it with my father, who voted for George Wallace and liked cop movies. He’d never seen anyone like Mr. Poitier. I held my breath, thinking the room might spontaneously combust. Respect was a big word to my father who felt no one gave him what he deserved. Being a teenage girl, respect was an unknown thing to me.

Rather than debating the relative definitions of respect, I’ll just say that growing up, I had a couple of horses that my father thought didn’t respect me and a long line of dogs who were closer than kin.

Now it’s fifty-five years later and I’m a clinician whose job is to negotiate understanding between horses and people. I’ve just spent three days driving to Texas with a dog in my truck, not that my father would have much respect for what I do, or what this dog does, but I’m sure he’d like the truck.

When I get a new dog, I make a point of trying to listen better. We are supposed to progress as humans, aren’t we? This time I’ve promised to never say no. It makes him nervous to be scolded, so I’ll find a workaround.

We signed up for agility class. Obedience classes should come first, but they remind me of western pleasure classes. I’m the one who’d flunk out. Besides, agility is like paying a quarter and getting seventy-five cents back in change. For horses and dogs, it’s all about communication and confidence.

I posted the weekly meme (above) about the power of words. People shared stories about discomfort with namecalling animals, us blaming them for our faults. Some felt shamed by others shaming horses. There was a light banter about the fun of namecalling as a joke, showing humor and good intention with namecalling. I get how fun it is to tell a story but I like to think I can have a  sense of humor without belittling my horse.

Words matter. We all remember the names where were called as kids. It was only a joke, the bully said, as if pretending it was funny was an excuse. As if sarcasm was an art, but is insult humor funny? The words cut us and we remember them today. We remember the bully’s name. Maybe their parent was a bully who took it out on them, and then they took it out on us. Bullies hit down, at easy targets. Finally, the horse got yelled at or the dog got kicked. Call it a family tradition. Why does praise come so hard to humans?

There is a word I’ve come to hate as much as any insult: cute. I’ve been raging against it long enough to make people nervous. It’s a perfectly acceptable passive-aggressive way to belittle and demean another. Stuffed toys are cute. When my first rescue donkey, the frightened one nobody could catch, won his fifth obstacle driving championship by being fast and brave and focused, people said he was cute . Really? Is that an achievement?

We buy draft horses because they are “gentle giants” until they are not. We get an Arabian because they’re pretty and end up namecalling them spooky when they are just honest listeners. It’s fine until we wake up and decide the cute one needs to be punished. We’re worse with dogs, buying them because we saw them in a movie or thought they had good hair and weird ears. I hear my new dog is cute.

I had a vision of our triumphant arrival in Texas, stepping out of the truck in a cloud of dog hair, looking like a rockstar emerging from smoke at a concert. Wrong in a dozen ways, but I took the new dog to be groomed just in case. A woman came out from behind the counter, baby-talking in a squeaking pitch, leaning over to grab him. His ears drooped, his eyes showed white, his belly dropped to the ground. His stress was obvious.

I’ve been writing and teaching Calming Signals in Horses for eight years now. It all started when Turid Rugaas, a Norweigian dog trainer, coined the phrase. After her book, it was impossible to not see the communication in all animals, even those we’re complacent about. Calming signals are an animal’s emotional response to their environment (short definition) and my dog was eloquent with the woman who wasn’t listening.

I suggested that my dog was nervous, which inspired the woman to prove me wrong. She got louder, bragging that she’d find his spot, ruffing his collar, such a cute boy, she chirped. As she was groping his belly, he held his breath. He looked in my eye and I took a deep inhale. He didn’t nip her but he should have. She was cute enough to deserve it.

The problem with cute is subtle and socially acceptable, but it creates a hierarchy. Cute is dismissive. We mean no bad intention. It’s just a way we maintain our superiority, a cute way to instigate passive-aggressive domination.

Have I gone too far? Another horse trainer told me that I took the horse’s feelings way too seriously. My father would agree. Or maybe I lost my sense of humor after years of being underestimated. Some girls do.

Anyway, our first agility class went great. The new dog flew over tiny jumps and through tunnels, careful to keep his eye on me. He didn’t attack other dogs and he came when I called. The problem was me. My tongue stumbled over his name more often than my feet stumbled over each other. So often the instructor noticed and suggested I give him a name for agility. What a relief. I think of it as his superhero name.

Mister is having his nap before bed as I write this. Soon, he’ll take me for an evening walk, he sniffs and I look at the stars. We both sleep better. Sometime in the night, he’ll hear something and position his breast bone in the soft center of my belly and bark, sitting on me until I’m safe. I wouldn’t think of punishing him. All any of us wants is acknowledgment. I tell him he’s good because he’s a dog, the very definition of good. He stops every time.

Dog stories all end too soon. The day will come when he takes his last breath and I will exhale with him, thanking him for a thousand hours of his head resting on my thigh, for all the mornings up early pulling his breakfast before my coffee, for the hours that he waits for me to return and for the welcome I am guaranteed each time without fail. Dogs give us their lives without judgment and I will try to live up to that gift. I will start with Mister by building his confidence affirmatively. I promise that he will know his value every day. I will ask the world of him, but I will never call him cute.

God bless all dogs and God bless this dog. 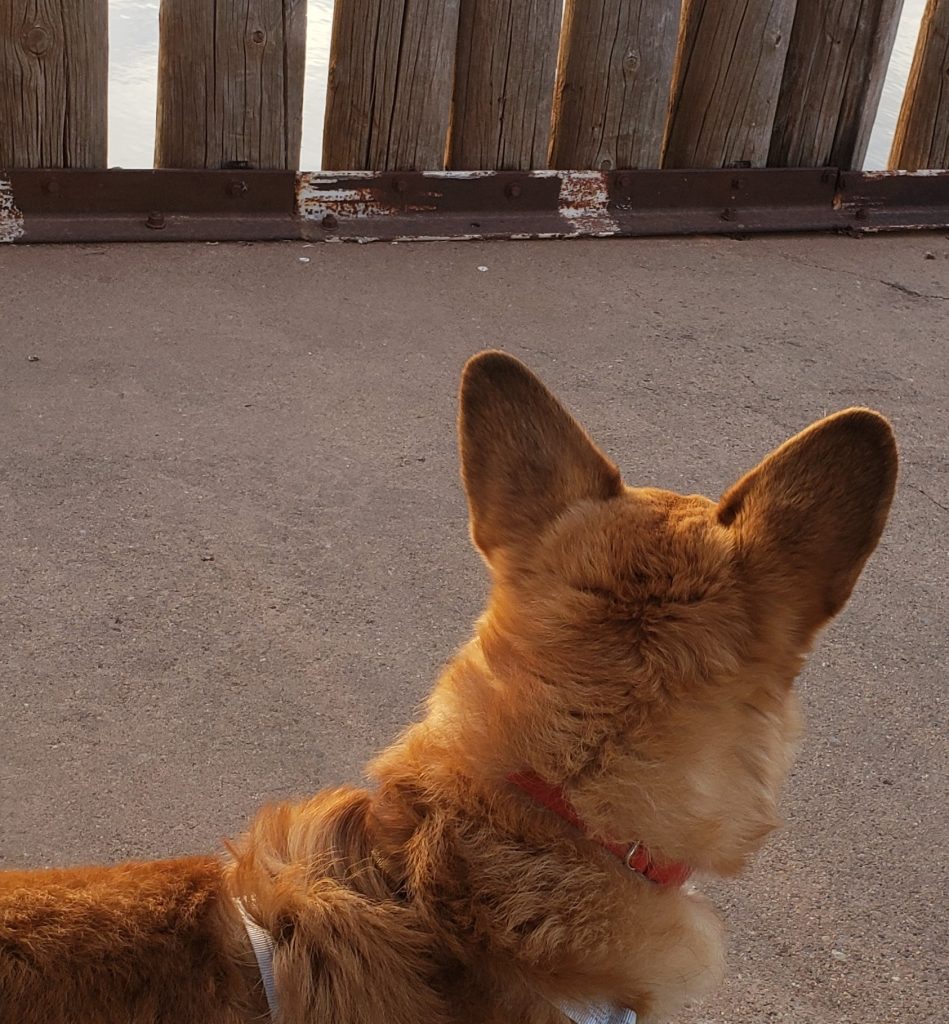 48 thoughts on “Calming Signals: They Call Me Mister Dog!!!”