Why “Ride ’em Through It” Is a Bad Idea 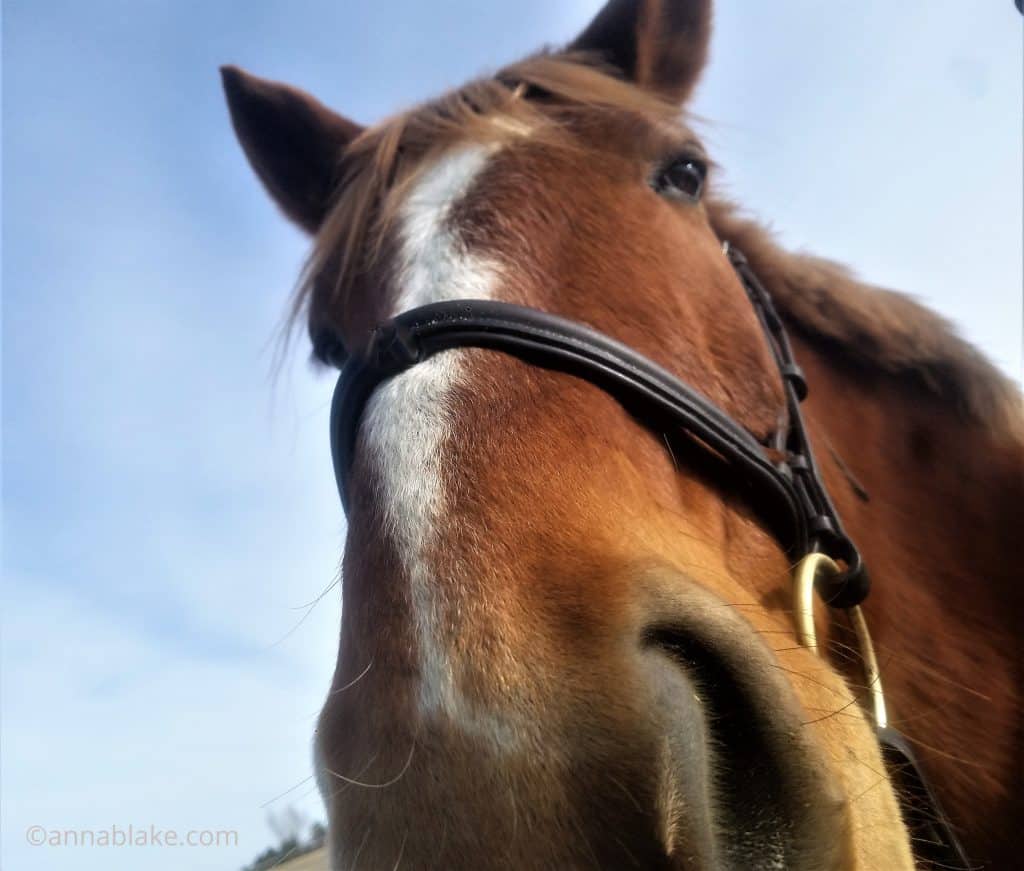 “Sure, your horse is tossing his head and wringing his tail, but you push him on. More leg. Ride ’em through it. More leg!” Or “Make the right thing easy and the wrong thing hard.” Or maybe something simple like, “Ask your horse to walk out.” It could be a trainer saying it, maybe it’s advice from a friend, or maybe it’s your own voice in your head, but things are sticky. “What’s wrong with me, why won’t my horse do this?” Oh, that’s definitely your voice, just an octave higher than it should be.

It’s easy to parrot out a quote but what did they mean? It all feels hard with nothing easy in sight. You’d rather not pick a fight, but the horse is ignoring you, as if that were even possible. You’re in a daze, flipping coffee-stained mental notes and partly-remembered videos in your mind, but now you’ve been throat-breathing and talking to yourself long enough that your horse thinks you’re ignoring him. Arguably right but still nothing works. He refuses to walk on, braced in his neck and pawing the ground. Sometimes he swings his head around to your foot with sour ears.

The worst part, and get ready for one more over-used but totally exasperating adage, “If you’re in the saddle, you’re training the horse.” Sadly true, if every time you ask for a canter, your horse tosses his head and lifts his front end in a tiny rear, doing it for another hundred times to “ride him through it” will create a habit rather than correct a behavior. What might have started as a one-off thing, but eventually what is happening is what you are training. Swell. So now it’s all your fault? Have you ruined your horse?

Add this: Some loudmouth smarty-pants is always spouting off about Affirmative Training. “Just say yes,” she says. You’re so frustrated that your teeth have dried to your lips and you can’t spit it out. Whose bright idea was it to give the horse a chance to volunteer? “A partnership means two voices,” she chirps. Well, now my horse has a voice and his training is like confetti in the air. A dictatorship never sounded better.

This is the point where the decent work you’ve done is about to get clobbered by cynicism and despair. And really, those are profane words around a horse. It doesn’t matter who got confused first, you or your horse. No instant in time is worth destroying trust and that is exactly what happens if we think being affirmative is fine on a sunny day but when things are challenging, aggression is not only needed but deserved. Escalation is always the easy path, even as it makes us unreliable to our horses. Why do we love punishment so much?

First and immediately, take a breath. Whatever you’re doing, just stop. Ease yourself back from the brink and let your horse do the same. Sometimes the most courageous thing to do is to back down from a fight.

Besides, it probably isn’t a training issue at all. If a horse, a flight animal(!), doesn’t want to move forward, it’s almost always about pain. It could be a pulled muscle, a sore back, or a sour stomach. It’s spring and a horse doesn’t need to have full-blown laminitis to feel some sensitivity in his hooves. Just because you thought your saddle fit last fall, doesn’t mean that it does now. Don’t make an assumption that it’s a bad attitude, give your good horse the benefit of a doubt.

One thing is certain. Spring grass must smell like the equine equivalent of cookies in the oven.

If his behavior changes, that’s communication. Resistance isn’t personal; it isn’t about you at all. It isn’t a master plan to humiliate you or a stubborn response to learning something new. Horses don’t think that way. If you pay lip service to listening to horses, now is the perfect time to prove it. What looks like disobedience is your horse trying to tell you something about himself. Are they confused by a barrage of cues? Does something hurt? Is that thing scary? A horse’s default position is defensive, focused on his own welfare and safety.

So, you might ask the loudmouth smarty-pants, now what? Finally, a use for all those years of reading mysteries and watching police procedural TV shows. You begin a process of elimination that will take some time. The Law and Order theme plays in the background.

Your horse has left clues for you. The tense poll and the sour ears are messages. That head toss points in a direction. Is it pain or a lack of balance? Is he cranky about your hands? That’s about pain, too. Calming signals have meaning and if we don’t listen to the small ones, bigger ones will follow. At the same time, if we can’t locate the pain, it will increase until it’s unavoidable. Isn’t that the story we tell in hindsight? That the unruly behavior was about ulcers? That the resistance was the beginning of an abscess?

What if we asked horses, “Who are you today?” and then actually listened. In my training, I do a lot of leading from behind. It’s an exercise to give the horse a chance to tell me about their confidence, how they were trained, and who they are on that particular day. Their owners are quick to tell me who their horse is, as if they are always the same person in every environment.

When we first start leading from behind, it’s easy to see it as a pass-fail test. We want to succeed; we want our horses to get it right so badly that we miss the conversation. Horses are eloquent in their silence; their resistance tells their story and reveals the path forward. We must ask questions that bring more questions. Obedience isn’t the gold standard and it’s well past time that we evolve our training beyond throwing temper tantrums. Where do you think horses learn that?

“Ride ’em through it” is more likely to create chronic issues and a bad attitude than train any work worthy of praise. It’s a way of saying, “I want it my way, and who cares about your pain or fear.” Most of us have been taught this domination approach. How does it leave you feeling?

Do you ever think about all those horses standing in pastures that no one rides? How many of them evolved from a bad ride into an unpredictable partner? Did their rider’s inconsistency, flipping from kind to cruel in each ride, make them lose confidence and become an unsafe mount? Do we quit them when we don’t get what we want?

I notice many rescue horses seem to have gotten there under suspicious circumstances. It’s a mystery that doesn’t take a genius to solve.