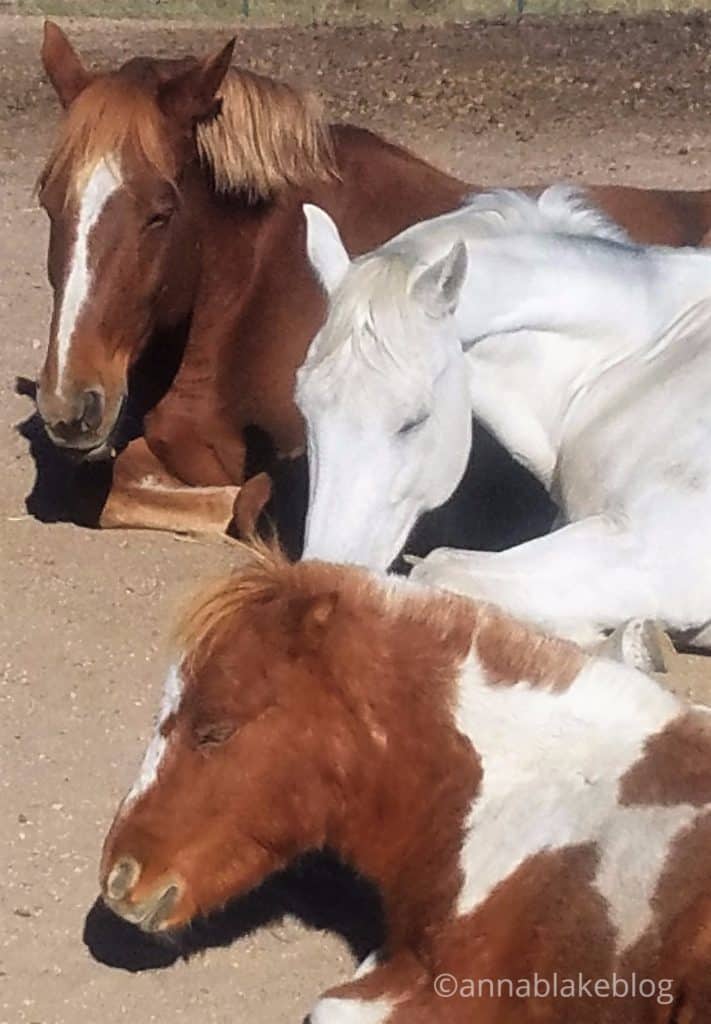 Horses are like bad boyfriends because they only want to talk about themselves.

Wait, let me explain. First of all, it isn’t a pejorative term. I’ve had enough bad boyfriends to know that I prefer them, for many of the same reasons I like bad dogs.

Sure, we have to give up having “relationship talks” where we “plan the future.” Things always go downhill when we try to make rules or quantify things with a horse. Their feelings take importance over ours. Plans seem made to be broken. It could be touchy when our feelings get in the way, but shouldn’t we value our independence, too? How do two self-reliant spirits come together? Isn’t that the dream of partnership with a horse?

Let’s be honest. Horsewomen can be a little schoolmarm-ish, too stuck in the straight and narrow. Sure, we are famous for sneaking horse blankets into laundromats and showing up in grocery stores with helmet hair. Our horse’s hooves look better than our hands, and we are party poopers who leave early to throw hay. It’s just that when it comes to horses, we can be a little linear. We want what we want, and we want it now. It’s as if we see horses through a narrow spyglass and want one specific answer so badly that we get blinded to the big picture.

Here’s an example: Say we have clearly asked for a thing. The thing might be doing an obstacle or a canter depart or just walking forward, but staying very straight and exactly thirteen inches off the rail. We have asked for a thing but the horse hesitates because he thinks you said, “Where’s North Dakota?” Then he hesitates some more because he’s confused.

If you have a bad boyfriend mare, she thinks you said, “Where’s Minot, North Dakota? I know, but why do you ask? Don’t you know?” and looks at you squinty-eyed. Mare boyfriends can seem tedious if you are the humorless kind.

We want the thing really hard. We want it and watch like coyotes, but our anxiety goes up a bit with our expectations. Maybe we insist just a bit louder, “Where’s North Dakota?” because they probably didn’t hear us, standing right there. Giving the same cue louder never works. Any reasonable horse doesn’t respond well to threats and we don’t like doing it, so we’re half-hearted and we lose confidence along with the horse.

Maybe we make up a story about their abused past and then give a different cue entirely, a cue for Arizona, hoping if we change direction, we’ll end up in the right place. But it doesn’t work, so we absolutely swell up with wanting the thing. We walk another circle and make another desperate plea for North Dakota, interrupting the horse before he could take any of the various cues we’ve given. We want to have a connection with the horse so badly that we tangle ourselves up in it.

Meanwhile, the horse is thinking about himself. And that is a good thing. He has emotions that we brag about when they flatter us. When these emotions get in our way, we’re stuck hearing old voices about domination and now it’s our mind making circles on its own. Maybe we have evolved enough to know that the horse is confused because we stacked a few contradictory cues before we knew it. It doesn’t matter how it started, both of us are stuck, the pause is heavy and we sit there trying not to do something else wrong. Egads, was that a double negative? We just wanted the thing.

The horse will make it okay. He’ll talk about himself. He’ll shake his neck, saying “I’m stressed out.” He’ll stretch his neck down although there is nothing to graze, “I’m no threat to you. You don’t have to worry so much.” Followed by a snort saying, “I was throat-breathing that whole time, I was so nervous.” He shifts his weight and releases his tail, “I just needed a minute.”

Sometimes horses have a better answer than the one we’re looking for. Releasing stress is always a better answer. So is going slow. And of course, we remember finally, less is more.

It dawns on us when our horse takes a breath that we should do the same. As the air fills our lungs, we get a little taller. In talking about himself, he’s shown us a path out. The bad boyfriend horse says, “I’ll soothe my own self, and you do you.” There is a novel idea; each partner gets to be their best self and accepts the other instead of trying to fix them.

Then, because the horse only thinks about himself, he asks the eternal question, “Am I safe?” as he licks and chews. And on your exhale, your good horse does the thing effortlessly, fluidly, by choice. In the process, he is more comfortable and you have given him space, albeit almost accidentally, to do it in a way that might be better than you imagined. At that moment, it all shifts because there is something fragile and beautiful we want to be part of.

We love horses but sometimes wish they were more like Golden Retrievers. Some of us will shut horses down, drilled into answering by rote. Micromanaged into learned helplessness, horses will lose sight of their nature. We forget that we make art with horses. They feel depression which we mistake for obedience. It’s a death spiral that might work for a while, but horses are horses. They don’t live to serve us. It isn’t their job to be perfect. Like a bad boyfriend, it’s their job to be unapologetically themselves, a thing horses truly excel at.

Sometimes we soul-search and worry and sell ourselves short. We second-guess, should we have trusted more to start? We get so busy mentally, that we re-think our overthinking. We interrupt our compulsive excuses to rehash every instant. We take ourselves so seriously that the dull roar wears us down. So, what do we do when our minds can’t stand their own noise?

We take our busy brains to the barn. We have a plan; we want a thing. The horses are grazing and we pause to watch. What if we take that cue, and just for today, let it all go?

One of the horses lifts his head; he is tall, his chest full as he listens to the air and scans the horizon. In the next instant, the others raise their ears and they are off, galloping the field, hooves cutting the ground, spraying light like a dirt halo, their tails flying high. Being who they are, who they will always be.

Horses would like you to know it’s a confidence game, each of you asking and listening, reaching across differences to find parts that fit each other. Without surrender but allowing our sum to be greater than our parts, if just for an instant. And if you want a lap dog, get one.

Anna Blake, Relaxed & Forward. Scheduling clinics for the fall in the Midwest and Eastern states now.