Creativity and the Problem with Training Techniques. 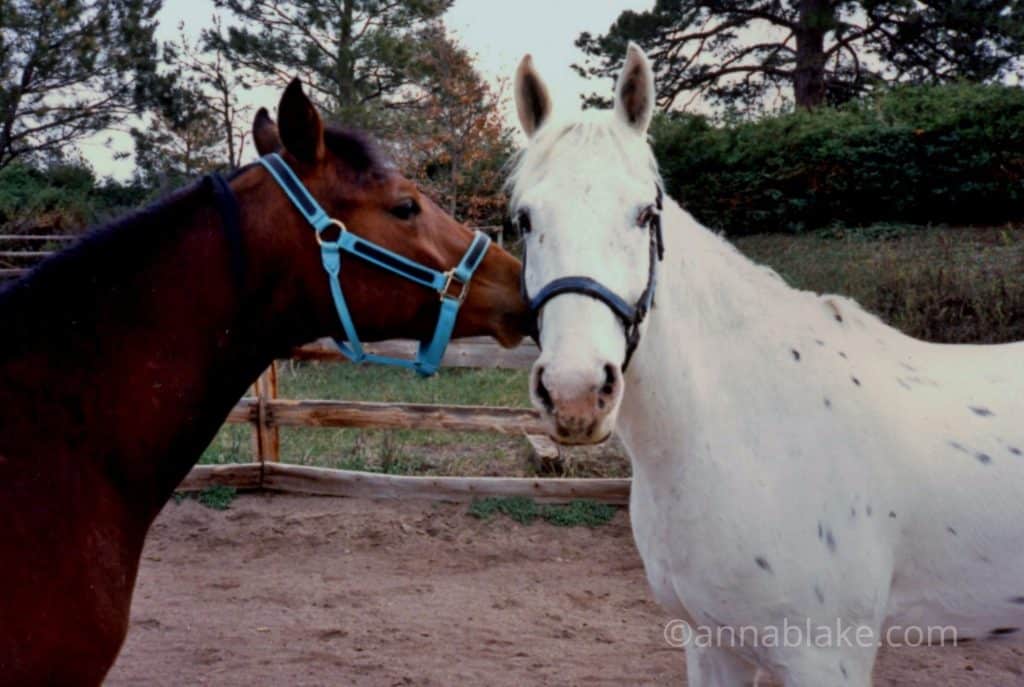 We were standing around the barn after the vet had left, a group of trainers and riders and horses, telling stories and laughing. I can’t remember what I said now, but the European trainer got suddenly serious with me, saying “You know there is only one right way to train that, don’t you?” I don’t remember what was said after that. The sentence shocked me, the accent made me feel scolded.

When I started back with horses after leaving home, I had two geldings who were as different as black and white. Some of it was physical; not the same conformation or size or age, but their personalities were polar opposites, too. One was arrogant and one had no confidence. One was always too quick and one liked to “conserve energy.” One was food aggressive and one wandered away from his grain. One way to train? I hadn’t even had one way to tack up.

The European trainer worked with nice horses, who performed well or flunked out. In a way, it wasn’t the worst thing. If you don’t feel you can get a good result with a horse, it’s best to say so. Most of the horses I trained came with a “history”, which is a code word for coming apart before, and an owner who wasn’t ready to give up. Good clients for me since I’m the sort who won’t flunk a horse out.

What do you do if quitting the horse isn’t an option? Some ask for advice and get fifty opinions claiming there is just one thing that will work, but they all contradict each other. Some will search the internet for a simple answer, trying a different technique every day for a month, but ending up with the same dazed and confused look their horse has. Frustration rules, they plead to the sky, a trainer, or the barn cat, “Just tell me what to do!”

The problem with a canned training technique, whether it’s an old DVD or on YouTube, is that it’s all great if your horse does the identical thing that the horse in the video does. But if your horse gives a different answer, you’re stuck. We must understand the “why” underlying the technique before attempting the “how,”  to ensure we don’t damage our horses.

Seeing a training issue from the horse’s side, it’s almost as if the human says something like, “Where is North Dakota?” and looks expectantly at the horse, who doesn’t have any idea. The human has been taught to escalate cues if the horse is resistant and soon the human’s voice has gone harsh, a whip might be tapping somewhere, and no one is breathing. It’s an impasse, the human can’t back down, now yelling, “Where is North Dakota?” and the horse is moving into his sympathetic nervous system, the flight/fight/freeze mode. No good learning can happen now.

Let’s say you know better than getting a stronger bit or wearing spurs. How to proceed? Stop fighting! It takes real leadership skill to wage peace. It means we prioritize the horse over our emotions. This is an acquired skill, it takes practice.

First and always, make good and sure the horse is sound. Don’t assume it, horses aren’t natural fighters and most of the time resistance comes from pain. Then get mentally engaged with the idea of how horses learn. Think less about an answer by rote and more about learning to communicate in the horse’s language.

Critics of our education system worry that we’re producing test-takers instead of creative thinkers. I worry about the same thing in the training world. We want to recite the right technique so the horse will perform the right task. We grade each effort as pass or fail. Horses look like robots and at the same time, we hope for beauty and finesse. We’re crazy-making.

Worst of all, when we use canned techniques without understanding who horses are and how they think, it’s the equivalent of an angry adult demanding compliance, “because I said so,” with the end result more important than the methods used. Instead, we should be engaging the horse’s curiosity and rewarding the try, beginning a path of learning that neither side ever wants to end.

Training techniques do have a place. Consider them the cheerful classroom where we meet, the studio where the art is created. Techniques are the starting place, not the be-all, because training should be less about blind obedience and more about understanding and perception from both teacher and student. One size never fits all but that’s the best part. It means we constantly add to our well of understanding of horses, that they will be endlessly fascinating in their individuality, and training will never be an answer by rote for us, either.

The topic of creativity is missing in everything I read about horse training, except for the words of classical riding masters who frequently said riding was an art.  They didn’t mean it as a figure of speech. It was literal.

Are you intimidated to call yourself an artist? Does the word come with baggage and expectation? Would you need to wear black? I had a long art career and I credit my success to growing up on a farm. It’s about getting by on wits and some twine, working with materials on hand. It’s thinking things through before rushing ahead, and knowing that sometimes trying an alternate route is better. It’s having a goal that’s hidden from view, and thinking it’ll be fun finding it. Instead of yelling, “Where is North Dakota?” louder, it’s starting the conversation by saying, “Want to go somewhere?”

How important is creativity? It’s how fear turns into curiosity. It’s how brains win over brawn. It’s the action of being in the moment with a horse and letting go of the need to control how the conversation unfolds. Creativity is changing perspective and experimenting, letting natural anticipation work in your favor.  It’s discovering a way to only say yes to a horse, and still get the result you want.

Creativity is how a human becomes more interesting than grass.

85 thoughts on “Creativity and the Problem with Training Techniques.”