A Short List of Things Horses Don’t Need Us to Teach Them. 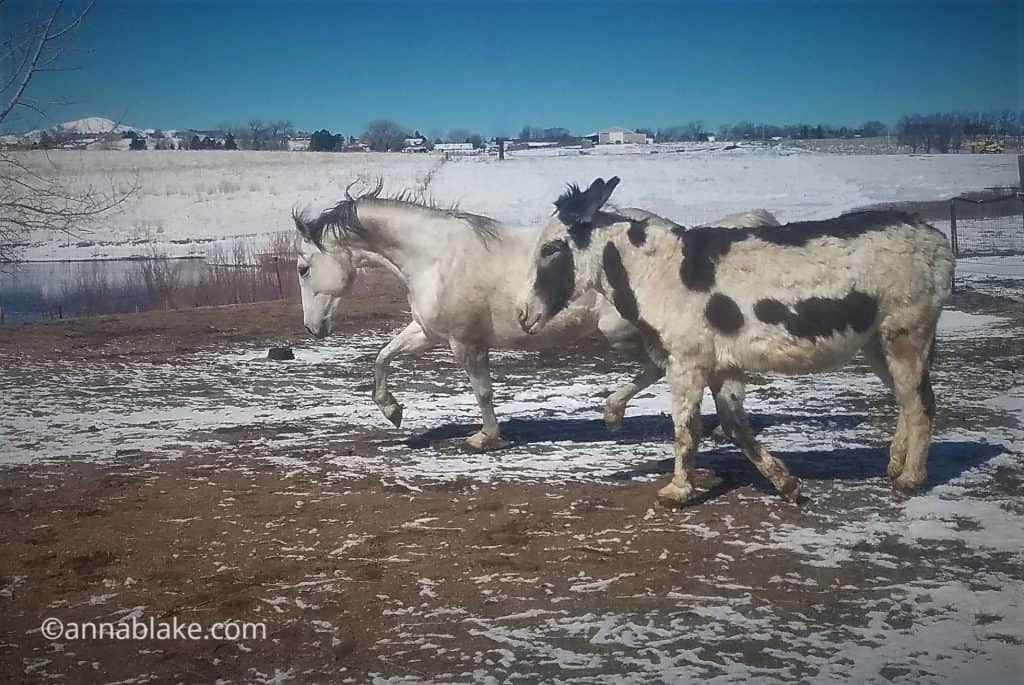 If Edgar Rice Burro were to title this Bev Doolittle-like photo, he might call it Beauty and the Beast. He lives with this mare, but she is always fussy about something. She’s a huge control enthusiast and it wears him down. The mare has no ears to speak of and an overly dramatic tail. She may be capable of a good mutual neck-chew from time to time, but she’s a little too prancy for his taste. Gray mares are insufferable.

I’m sure you can guess what Clara thinks. The donkey is coarse, and for crying out loud, he doesn’t even care to pick up his feet. His ears are so unwieldy that they probably poke him in the eye on windy days. Although Edgar can open any gate on the farm, she’s certain he isn’t nearly as smart as she is. Because really, no one is.

Maybe you look at this photo and say, “Gadzooks! Perfect head position.” Edgar nods a thank you. Contrary to Clara’s opinion, he’s just as right as she is.

Equines don’t sit around talking about humans and we should be glad of it. If they did, I think they might call us control enthusiasts and not as smart as we think we are. They’d complain that we fight their common sense and work to diminish their strength. They might say humans have an exaggerated definition of what needs training. Clearly, humans are mistaken about who needs training, says every mare of any color.

Here is short list of the things horses do not need us to teach them:

1. How to walk, trot, and canter. They are born knowing how, landing with three gaits on the first day. Sure, the canter was wobbly, with too much up-and-down and not much here-to-there. It takes a while before foals connect to the earth enough to make large strafing runs at their mothers, but they are born to run. At the same time, why do horses fight our hands when we ask for a trot? Why do we think so many horses have problems with their canter depart? Especially when they lift to the canter effortlessly in the pasture.

2. Horses would like us to understand that they know how to hold their own heads. That we’re silly to focus on the 10% of their bodies in front of their ears when their hindquarters are the real deal. Of the total body mass of a horse, why do we need to micromanage that last 4 inches of the muzzle? How did the vertical angle of a face become the prize, more important than conformation or biomechanics? It isn’t a rhetorical question for horses. For a horse, a flight animal, it’s all about balance, front to back. Can he catch the earth and move? Balance is the most important ingredient in how relaxed and calm a horse can be, even at a gallop.

In the photo, Clara feels confident with a long neck and a soft poll, the result of a big strong butt, even if the donkey blocking the view of her best asset. Her topline muscle is stronger than the muscle under her neck; she’s lifting her back, engaging her abdominals, so light she floats into motion. Edgar has a straighter shoulder angle, a shorter topline and he uses the muscle under his neck like any self-respecting donkey; he canters with his nose straight out because he’s not a horse, he’s happy to remind you.

Thoroughbreds are built like greyhounds to run with elongated straight bodies that take longer strides, winning races not by taking more steps but by going farther in each stride. Belgian draft horses are built like bulldogs with short necks and broad shoulders built to lean into a harness and pull heavy loads. Some Friesians are tall and lanky, others broad and stout. Arabians vary so much that Egyptian lines can look like a different breed than Polish lines. Variety in the same breed can be extreme. So why do we think an Arabian can jump in the same height a Warmblood does? Why do we ask Quarter Horses to look like Andalusians in the bridle? Why do we try to force horses into a cookie-cutter frame instead of celebrating diversity? It doesn’t mean that Shetland ponies don’t love a good race, or that draft breeds can’t dance in the moonlight. It means it isn’t up to us to position a horse’s head. They have been doing that since they were born, and they know just where it needs to be. They understand that a relaxed back and a push from their hindquarters is what defines their head position, not a bit or human hands. The correct head position is a result of freedom of movement, at liberty in the pasture or under saddle. A soft poll is a gift of balance and trust, not a demand for contact with aggressive hands.

3. The last thing on the short list is the one we humans do by instinct that horses fear most personally. We think we must teach horses to give to pressure. They certainly don’t do it naturally, any more than humans do. That’s what all the domination tug-of-war is about. Why do we train generally peaceful animals to fight the reins? Not just fight them, why do we train them to lose the fight? It shatters their confidence to relinquish control of their bodies. Then their anxiety makes them dangerous to us. You’d think we’d figure out cause and effect at some point. Wouldn’t it be better if we stopped bothering their faces; if we trained ourselves to not pressure horses and instead, work in partnership with them? “Who died and made you boss?” said every mare, stallion, and gelding fighting for balance and autonomy. Head position is only language, balance during a moment in time, as is their sentient right. Instead of disobedience, think Calming Signal. Respond with softness; let the horse know you are not a threat.

Want to try an experiment about forward? Look here: Give him his head.

A few moments after the photo was taken, Edgar Rice Burro has his neck stretched out long and low to take full advantage of the fingernails working the dock of his tail. By then, Clara has heard an inaudible sound or senses a whiff of blood in the air. She tenses her poll, lifting her nose, her job is never done. She snorts and scans the horizon for lurking coyotes or predatory plastic bags galloping along with the prairie wind.

…Affirmative training is the fine art of saying yes.

24 thoughts on “A Short List of Things Horses Don’t Need Us to Teach Them.”