Affirmative Training: Can You Take a Hint? 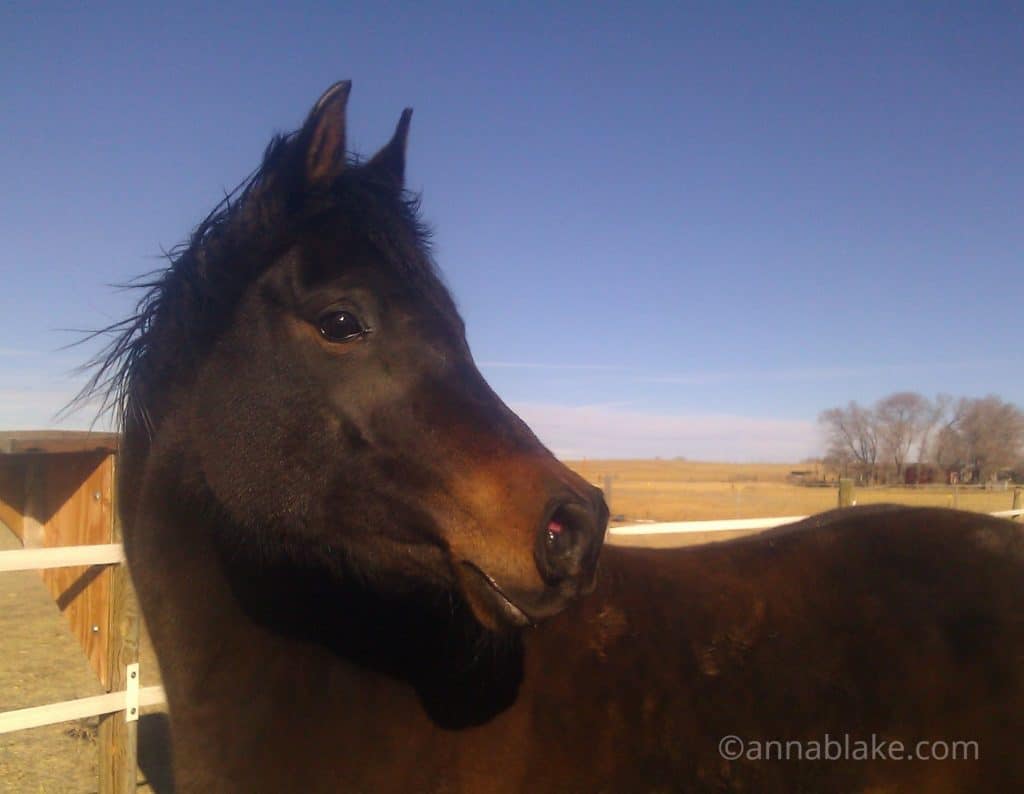 It’s a story that I’ve heard quite a few times. You’ve heard it too. The horse was getting a little worse all the time and the rider was trying to get him fixed. When the gelding got fussy in his face, the rider tried to hold his head steady by using pressure on the reins, a choice that means something else to horses. A horse might take it as a halt command, or just feel the metal-on-bone pain. Get the spurs, the horse isn’t forward. Now the rider is asking the horse to stop with her reins and go forward with her spurs, and simultaneously contradicting herself. And the conversation accelerates from there to a vicious cycle of fear on both sides. It doesn’t matter what you thought. Horses have a hardwired fear of being constrained or having their movement restricted.

Hardwire is another word for instinct, an inborn behavior that is a response to environmental stimuli. If you stumble, it’s an instinct to try to catch yourself. You don’t have a chat in the frontal lobe about it, your nervous system defends your life for you. Yay, nervous system. An innate instinct to survive is something to be grateful for. Except… when a horse has a hardwired response that the rider doesn’t like. Up until now, both horse and rider are reacting to stimuli. They are defending their lives against each other. That isn’t a problem, it’s a feature. All is right with the world, even if you don’t like it.

Should we be able to alter our instincts? Sure, here is an experiment to try. Put your hands in your pockets and do a face plant. If you are worried about your nose, then fall backward or sideways, but your goal is to land like a tomato. Tomatoes aren’t burdened with instinct.

About now, the rider looks for more leverage with her gelding, mental or physical, because she wants to ride. It might be a stronger bit, or a tie-down because the gelding is starting to rear. If he can’t go forward, he’ll go up. The gelding is also getting spooky and out in the pen, harder to catch. Things are headed the wrong way, the rider knows it isn’t working, so then she puts the horse in training with someone who can help the horse behave. Again, asking for help is a good idea, and rather than listening to more lousy railbird advice, this rider hires a pro.

She might pick a dominant trainer whose idea of training is to something near learned helplessness. This trainer can out-threaten the horse into shutting down, forcing the gelding to submit to pain. He looks like a pushbutton horse now. It’s the last stop before death, but he’s only playing dead. Yay. But haven’t we heard this one too often; isn’t it too easy to wring hands and shake heads? Let’s say this rider found a kind compassionate trainer. Someone who understands how horses think and works on trust with the gelding. In a short time, he’s soft and calm. His ears are curious, he transitions into gaits without tension. And his eyes, why didn’t you notice his eyes before? His eyes are soft, and they take your breath away. You remember why you fell in love with horses. Aren’t trainers wonderful?

In either case, the rider writes the trainer a check and the horse is back working with you. In either case, the gelding’s behavior changed and now it’s up to the rider to carry on. What that means is you must ride like your trainer did if you expect the gelding to give you the answer they got. Sure enough, the gelding starts to rebel within a week or two. Or maybe he’s just returning to normal. The rider most get more aggressive or more sensitive, like either of those options is easy. You blame the trainer. All that money and the horse isn’t any different at all. Aren’t trainers the worst?

As a trainer who’s heard plenty about what horrible or saintly people trainers are, can I ask a question? Are you a tomato? Is your horse? It’s a serious question. We get so focused on fixing horses, prioritizing training as the ultimate solution to solve problems. Training is the holy grail for tomatoes, that’s for sure. Nobody does a ground tie like a tomato.

It’s a bit more complicated for those of us with instinct and now the gelding is tossing his head again, as a horse must. And the rider is pulling on his face, as a primate will.

Stop. It was never meant to be a training problem. It was always a conversation. He said, with crystal clarity, that pulling on the reins hurt his mouth. Or if you ride bitless, he said the pressure on his nose was confining. Or he lost confidence, not feeling safe in the environment. It could be anything, but he is responding to stimuli and he hasn’t panicked yet. Good boy for speaking up and giving the rider a chance to help. Yes, I just praised the gelding for tossing his head. He’s asking for help, nothing more diabolical than that. Who was it that needed to work with a trainer?

The rider could take a hint, the rider could choose to hold neutral thoughts. No judgment, just ears. Here is the real question to ask: What if the gelding isn’t wrong? What if we trust his intelligence, even if he’s saying something we don’t want to hear? And then, what if we were a good sport about it? That would be a conversation with a resolution in sight, with both you and your horse’s instinct in a ready position. Right as they should be.

If we respond rather than react, the horse is affirmed by the rider listening and helping. The result is a more confident horse: less spooking and more willingness to give the rider the benefit of the doubt. Now the horse looks for understanding rather than punishment. His body is relaxed and more balanced, more likely to stay sound. A relaxed horse might spook at something, but his back is softer to start so instead of a full defensive panic, it feels like a bounce.

Then the rider has more confidence, her legs don’t do the thigh-master impression, she is slower to react. No panic. The gelding’s eye gets round and soft because he isn’t in pain and he feels safe. The rider has an unconscious smile because she is sitting in her favorite place in the world. Instinct still feeds a vicious circle, but this time a vicious circle of trust and affirmation. And the two of you have to get used to being beautiful together.

36 thoughts on “Affirmative Training: Can You Take a Hint?”