The Thing About Donkeys 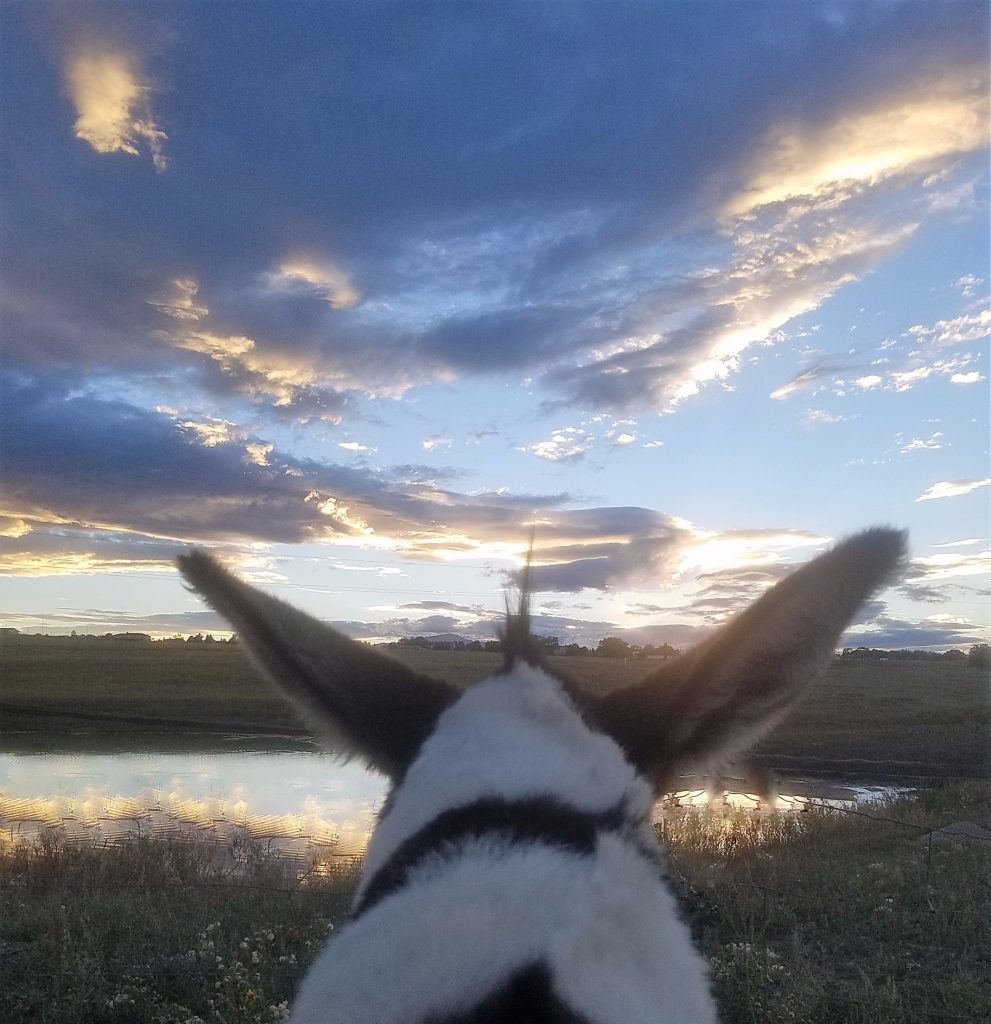 I wrote about mares and the response was so huge that I felt guilty and wrote about geldings. Since then, the requests have been about donkeys, but I’m more thoughtful. Because donkeys require consideration. Because I’m bluntly defensive of donkeys. 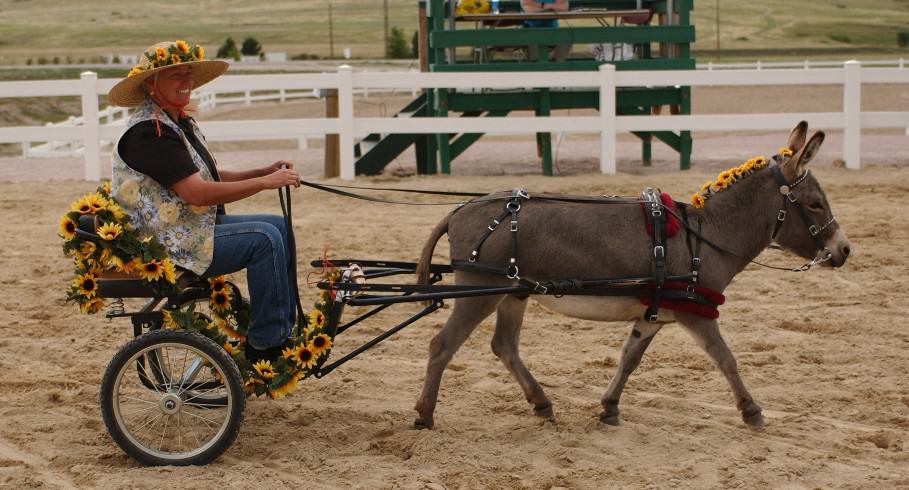 The sunflower cart photo is of me and my first rescue, Ernest. Some of us longears had been invited to a draft horse show to do a demo. Just before this photo, we’d been parked at the side of the entry road waiting for the class before us to be called in. Six draft teams passed us at a high trot. Ernest, hip cocked, didn’t look or care. They were just the opening act, as far as he was concerned. We won my all-time favorite ribbon that weekend, says this dressage queen. It was third place in log skidding, among a field of draft horses. Sure, our log was smaller, but an adjusted equivalent weight. He cantered across the finish. Ernest didn’t get a good start with humans (I wrote about him in Stable Relation) and I thought we’d come so far from those untouchable-slipper-feet days when he first arrived.

Truth is that we hadn’t even scratched the surface. Since then, I’ve had the privilege of working with many donkeys and mules and find myself constantly humbled by their intellect and self-awareness, which they guard closely. If you meet donkeys that pander to you, don’t feel flattered.

Humans profoundly underestimate donkeys. We go nuts for animals with oversized ears. We squeal and moan and sigh about how cute they are. We tease them with treats and dress them up in hats. They are the butt of ass jokes. Almost everything we do around longears confirms how unintelligent we are. Just for the record, donkeys understand sarcasm and don’t like it.

Donkeys are a constant contradiction; a walking, braying paradox. Part of our misunderstanding comes from an expectation that they will behave like a horse. Donkeys give you a sense of being prehistoric, a quality of timelessness, but at the same time, they’re so clever, so far ahead that the conversation is over before you realize. They never put another’s opinion above their own and while they are kind and peaceful by nature, they are not burdened with a desire to please humans. Horsemanship skills must be better if you want to stay on the good side of a donkey; old-timers say that you should treat a horse the way you have to treat a donkey. Horses will fill in for a human; a trait that donkeys think is a foolish and shallow judgment on the horse’s part. 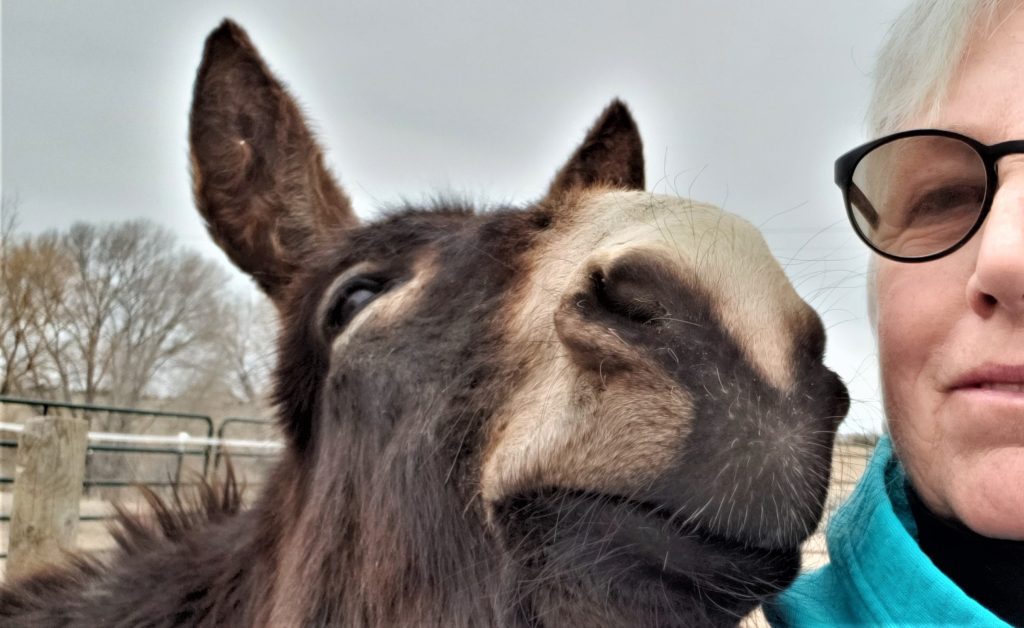 Donkeys have a reputation for being stubborn, the original calming signal. Donkeys shut down in ways a horse can’t imagine. They require polite conversation. If they believe they have been treated rudely, just like llamas and seals and a few other self-respecting species, they flatly refuse to communicate at such a base level. They are suffragettes, they are civil rights activists. They are peaceniks who believe in a non-violent sit-in to a debate. They will stand patiently as you throw your fit, demand hollow respect with un-natural horsemanship, or sing curse words to the heavens. It’s fine with them if others debase themselves. They are Zen-masters, for crying out loud, they get along with goats! Dang, if you think they’re cute again but that’s because you don’t understand goats.

A donkey might be curious enough to come up and meet you, but trust is another issue entirely. If you manage to win a donkey’s trust, he will carefully consider anything you ask, weight it in his mind. He requires time to reason his way through. He answers when he’s ready but once that decision is made, he will be committed.  His loyalty will not falter. Conversely, if you pick a fight with donkey, they are much stronger than a horse of the same size, but sadly, easy to abuse. They won’t fight back. If you think you’re an affirmative trainer, consider training a donkey your master’s thesis.

Ranchers run a donkey with a herd of cattle because they don’t lose calves that way. Donkeys don’t love calves, but they can’t abide an interloper who threatens the peace. Donkeys will stick up for the weaker ones. They are only marginally okay with your own dogs, but visiting dogs are wolves and will be treated as such.  They tolerate the intolerable mare. Babysit the babies. Donkeys play chess, are always several moves ahead, but don’t bray about winning. Donkeys do not suffer fools or arrogant smarty-pants, but they will stand quietly while small kids poke them in the eye.

Some of you may feel I’m being dismissive of mules. No sir. But the only thing that makes them different is the donkey half, so I’ll continue.

Give up your weather app. If there is a storm coming, you can’t lead him out of the barn but if there is new grass growing an inch or two under the soil, they won’t come in from the pasture. Because they are ruled by common sense, a thing almost too rare to recognize.

Donkeys bond more strongly than horses. Separation is heart-breaking and they feel compassion for herd mates. They can struggle with depression. We tend to think they are even more cute when depressed, you must breathe and look past their ears. 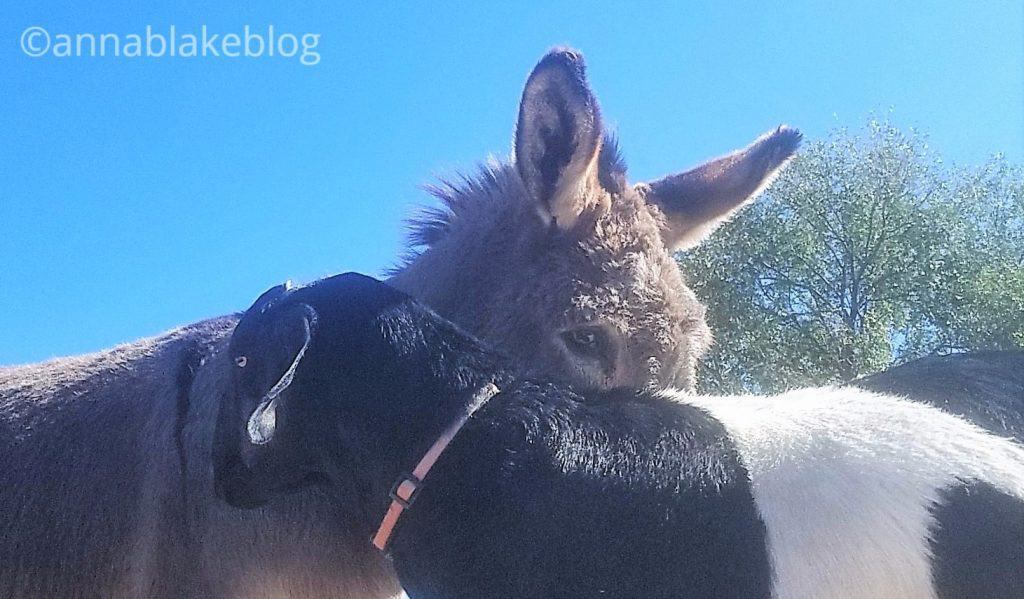 As serious as donkeys are, I’ve never met a more playful species. Get up in the middle of the night; there they are, rearing and dangling from your horse’s neck. I got my donkey an Andalusian yearling as a stall toy. Best. Gift. Ever.

As smart as donkeys are, they appreciate having time to think. This is where the stubborn misunderstanding happens. And may I remind you, you don’t like it when a horse jumps to conclusions and bolts. Donkeys need time to weigh their options and make a choice. If liberty is your thing, well, let’s see who knows the definition of that word better.

You can call them cute. You can trivialize their kind nature and intelligence. It’s easier to dumb a donkey down than to live up to one, but be ambitious. Horses will love you for it. But at the same time, don’t screw up. Donkeys have very long memories. They hold trust sacred. You will not win a fight… but that’s the best lesson anyone can learn.

The donkey creed: Never return aggression and never give in. Donkeys persist, beyond the judgment of others, taking their own best council.

So for now, I’ll seek longear wisdom because they will only settle for the best I have. Because it isn’t about what I can get a donkey to do, but who a donkey can inspire me to be. And if the day comes that someone calls me an ass, I’ll square my shoulders and stand tall. I’ll smile big and proud.

Edgar Rice Burro is about twenty this year. He continues to be our moral compass, helping visiting equines feel at home, leveling all our varied temperaments. He still stages breakouts for his friends if he’s in the mood. Edgar supervises the farrier at close quarters and when he sees the others are okay, solemnly offers a hoof. Edgar has retired from actively training humans. Maybe he finally trusts me on my own or maybe he’s so deep in my brain that I can’t tell his thoughts from mine. I am certain of this; donkeys will always hold us to their standard.

46 thoughts on “The Thing About Donkeys”